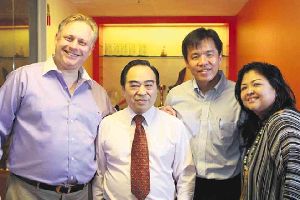 The company operates in the Philippines, Singapore and Malaysia, servicing businesses in a variety of industries—from real estate to fashion, food and pharmaceuticals. It’s been responsible for some of the most exceptional marketing and PR strategies we’ve seen, including Bayan DSL’s Lola Techie campaign, Toblerone’s National Thank You Day and Kraft Eden’s YUMM (Your Ulam Mas Masarap) campaign.

The latter campaign broke a Guinness World Record and showed off Filipinos’ culinary talents when it created 5,845 cheese-inspired dishes. Now, palanggas, that really deserves a wow!

There was a buffet with tons of food, eye-catching décor and a special blessing by famous geomancy expert Master Joseph Chau, followed by a dragon dance, natch!

“GeiserMaclang really knows how to throw a party,” said Johnson Ongking, vice president of Boysen Philippines. “Everything was well-organized down to the smallest details, such as the lunar calendars and harvest baskets they gave to guests.”

Said company owner Amor Maclang, “2010 was a great year for the company, and we wanted to share our good fortune with our clients and be thankful and proud of the partnerships we’ve formed with them. We’re honored that our clients approve and are happy with our effective and socially relevant strategies for them. This is a momentous occasion for Geiser Maclang, and we look forward to creating more groundbreaking campaigns in the future.”

Après the invitees’ applause, it was time to circulate till way past 1 a.m., palanggas.

You may know her as a woman of substance and stature, dahlings, but only few know her as a philanthropist with a heart for the needy.

Vicky Belo recently jetted to my beautiful Bacolod with Presidential sister Pinky Aquino-Abellada, no less, for the turnover of two preschool classroom buildings in Barangay Taculing.

Top corporate imaging consultant Jojie Dingcong, who is helping Pinky’s foundation, introduced her to Vicki. It wasn’t hard to convince the good doktora to get involved in Pinky’s national project. Vicki eventually committed to helping her build 100 preschools all over the country through the Aquinos’ AGAPP Foundation, with the help of corporate sponsors and other charity organizations.

Vicki donated the school buildings as part of her education advocacy for the Ike and Nena Belo Foundation, palanggas, a charity arm of the Belo Medical Group, that she put up in honor of her parents. Southern lady Millie Kilayko superbly organized the school turnover ceremony in Bacolod.

Vicki immediately captured the hearts of the Bacolodeños by answering questions about her clinic and the foundation. Her daughter, Cristalle Henares was also on hand to assist in the turnover ceremonies.

Unknown to many, after completing a business management degree at the Ateneo de Manila, Cristalle had spent six months as a volunteer teaching grade-school students in Bukidnon. Today, she is at the helm of Belo Essentials, the company behind products bearing her mom’s name, made for the mass market.

While in Bacolod, Vicki had her fill of the famous yummy chicken inasal, making her instantly forget her diet.

“I am now planning to build another school for the children! These kids really need a formal background for their future,” she said.

Before hundreds of dealers from all over the country, Samsung proudly introduced its “technological innovations and most promising mobile phones for 2011,” as SEPCO president KC Park put it.

Sepco also awarded the top dealer accounts per region for 2011, and the dealers with the highest sales growth percentage in the second half of 2010. The awards were announced by Samsung executives Michelle Ferriols and TJ Pelayo, who also hosted the fun event.

The guests dug into the yummy buffet table with an open bar. Great entertainment was provided by Freestyle band, which got everyone soon partying hard, dahlings.

On a recent trip to New York, dahlings, we were invited to a piano concert featuring our very own Jovianney Emmanuel “John Em” Cruz, a former protégé of former First Lady Imelda Marcos. Cruz has won scholarships at Chetham’s School of Music in England, the Manhattan School of Music under eminent piano pedagogue Solomon Mikowsky, and as a scholar of the Young Artists Foundation of the Philippines.

Cruz performed with 11 other concert pianists from all over the world, all former pupils of their teacher and mentor Mikowsky, to inaugurate the new recital hall at the Manhattan School of Music named after Mikowsky.

Well, palanggas, New York is all about the arts and attending cultural happenings. Operas and Broadway plays make for memorable trips to the Big Apple. So, faster than you could bat an eyelash, we accepted his invitation, and witnessed a brilliant concert pianist who made us all proud that night. Jovianney Emmanuel Cruz—remember his name, palanggas.