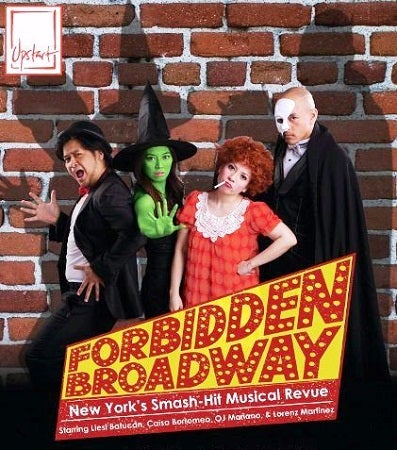 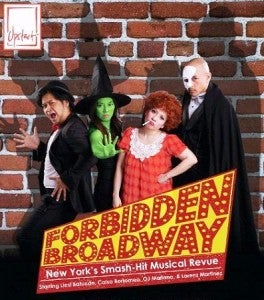 During its first Manila run held last May 2012, “Forbidden Broadway” received critical acclaim and glowing reviews from the press. Audiences both young and old who were “first-timers” in a live theater production or who have already seen local and international productions of Broadway-themed shows have unanimously expressed their joy through unstoppable laughter all throughout the show. With the sold-out shows and audience impact, the producers of the show decided to stage the re-run to accommodate the new breed of theatergoers.

“Forbidden Broadway” is a four-person show, with two men and two women playing pivotal roles. The comedy musical which was conceived, written and directed by Gerard Alessandrini has mocked popular shows on Broadway since its 1982 debut at the Palsson’s Supper Club on New York’s Upper West side. The show also targets famous Broadway actors, writers, composers, directors, choreographers and producers.

“Forbidden Broadway” is directed by Joel Trinidad together with Cathy Azanza-Dy as assistant director.

As topnotch performers in their own right, the cast shall showcase again their talents and skills as they act, sing, dance and change costumes with more than fifty characters roles from Chicago, Annie, Into The Woods, West Side Story, Wicked, Les Miz, Phantom of the Opera, Mamma Mia, Rent, Spamalot, Cats, Fiddler on the Roof, Hairspray and A Chorus Line.
“Forbidden Broadway” has won awards from Tony and Drama Desk, Obie and Outer Critics Circle.

As New York’s longest running musical comedy revue that has been rewritten the show over a dozen times over the years to include parodies of newer shows. “Forbidden Broadway ” in its various editions, has received more than 9,000 performances and been seen in more than 200 U.S. cities as well as playing in London, Tokyo, Singapore and Sydney.

So don’t fail to catch the re-run of what the New Yorker calls “the funniest show in New York.” It’s a forbidden pleasure!