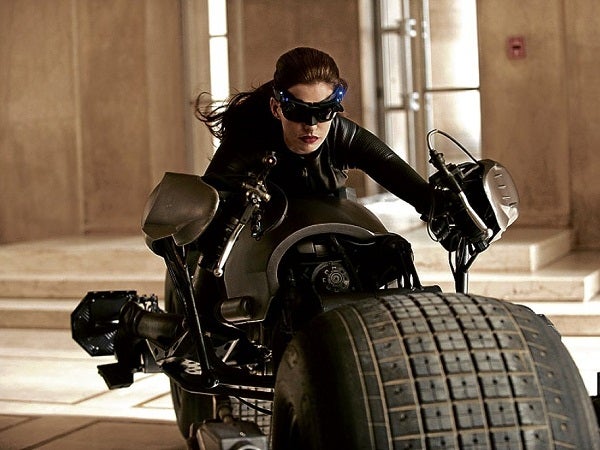 In the closing moments of 2008’s “The Dark Knight,” Batman has neutralized the threats facing the people of Gotham City, but at great personal cost. In the public’s mind, he has become a villain to be hunted rather than a hero sworn to protect them.

He flees into the night, with the Gotham City police giving chase. Commissioner Gordon’s young son asks his father why Batman is running away when he didn’t do anything wrong, and Gordon answers, “Because we have to chase him … Because he’s the hero Gotham deserves, but not the one it needs right now. So we’ll hunt him. Because he can take it. Because he’s not our hero. He’s a silent guardian, a watchful protector. A dark knight.”

That moment left audiences breathless, closing one film with the promise of another—a third film to finish the tale. Now, with the summer release of “The Dark Knight Rises,” writer/director Christopher Nolan’s epic conclusion to the Dark Knight trilogy, that promise is being fulfilled.

When he started on his journey with Batman, Nolan didn’t anticipate that he’d now be finishing up his third film. But, he says, “Stories have a beginning, a middle, and an end, and a trilogy of films naturally lends itself to telling a complete story.”

“The Dark Knight” was acclaimed by critics and audiences alike for transcending the possibilities of what a “comic book movie” could be—massive in scope, but anchored by the complicated emotions at the core of its haunted anti-hero. The film marked Nolan’s second chapter in Batman’s tale, the first being 2005’s “Batman Begins.”

Though plot details are scarce, Nolan tells us the story picks up eight years after the events depicted in “The Dark Knight,” after Bruce Wayne has saved Gotham but lost both the woman he loved and his identity as a force for good. Now, he’s isolated, having locked himself away from the public eye. “He’s frozen in time, really,” Nolan explains. “He’s given up being Batman because he’s not needed at this point. It was very important to us for the ending of the last film to have an effect on Gotham, and it has. Superficially, Gotham is in a much better place.”

In his fourth collaboration with Nolan, Bale trusted the director to create a worthy finale for the character he has embodied for nearly a decade. “Chris has always got a great combination of cerebral choices with the story and where he wants to take it,” Bale says. “Then he goes into the heart of each character, finding what’s underneath, which is the subtext throughout.”

Though Bruce remains surrounded by his trusted inner circle of Alfred, Lucius Fox and Commissioner Gordon (played again by legendary actors Michael Caine, Morgan Freeman and Gary Oldman, respectively), he is living with the consequences of choices he has made on his own. “Throughout the saga, Alfred has warned him what could go wrong,” Bale says. “So, this is crunch time for how much longer he can let it dominate his life. But can he give it up? Or has he become addicted to it?”

In Bale, Christopher Nolan sees a parallel with Bruce Wayne’s sense of discipline and focus. “He’s not Bruce Wayne,” the director states. “He’s playing Bruce Wayne, but I think he’s able to do that because he himself has an incredible dedication to his craft.”

All of the action in “The Dark Knight Rises” is captured by Oscar winner Wally Pfister’s cinematography, a good portion of it using IMAX cameras. “We were looking for an operatic quality, for a large canvas feel,” Nolan states.

“The Dark Knight” marked the first time ever that a major feature film was partially shot with IMAX cameras, and Nolan has not gone back since. “When we projected it as prints on those large IMAX screens, it was clear to anyone who got to see it in that form that it’s a form of filmmaking utterly unlike anything else,” Nolan states. “The resolution of the image, the quality, the scale of storytelling that you’re allowed to do in that format— there’s simply nothing else in the world that lets you do that.”

From “Batman Begins” to “The Dark Knight” to, now, “The Dark Knight Rises,” Nolan feels a great sense of completion at being afforded the rare opportunity to tell a complete story with such depth and breadth. “We’ve managed to put everything into this movie that I wanted to do with the character,” he reflects. “It’s done for me. And I’m very hopeful that audiences will respond to that because there is nothing more exciting than the conclusion of a very long story that you’ve been invested in. I’ve felt that in making the film, and I’m really hopeful that the audience is going to feel that way in watching it. That’s the great thing about entertainment, and I feel very lucky to have had the opportunity to finish the tale.”