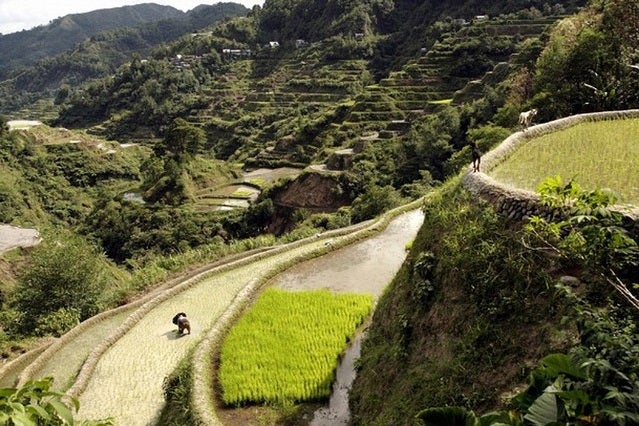 MANILA, Philippines—There is need for constant vigilance to ensure that the Cordillera rice terraces, recently removed from the endangered list of world heritage sites, would continue to remain a pristine world wonder.

Secretary Ramon Paje of the Department of Environment and Natural Resources said in a statement that Filipinos must continue to remain aware of the need to conserve and protect the cultural site and to be involved in such activities.

The rice terraces, located in the Cordilleras, were stricken off the list of endangered heritage sites after the 36th session of the United Nations Educational, Scientific and Cultural Organization (Unesco) World Heritage Committee in St. Petersburg, Russia, on June 26.

“The rice terraces are the most amazing representation of the harmonious relationship between our forefathers and nature. We cannot afford to take it easy in managing this 2,000-year-old cultural heritage. Instead, we should step up our rehabilitation efforts and improve our conservation practices,” said Paje, who is also the Philippines’ commissioner for Unesco.

The high-elevation terraces, used to plant rice, were carved from the Cordillera mountains. The sculpted terraces look like giant stair steps to the sky from afar.

According to Paje, the country should come up with sustained conservation measures such as limiting human settlements within the rice terraces and exempting it from agrarian reform.

He said the removal of the terraces from the endangered list was just the initial success in protecting the globally important cultural treasure.

Among the government’s plans to protect the rice terraces is to offer community-based alternative livelihood to Ifugao farmers. The DENR and the departments of agriculture and agrarian reform would be working together on this, he said.

There are also plans for the public works department to improve the roads and other infrastructure in the area to boost tourism, he added.

The DENR earlier provided P5 million to the Ifugao government to fund the repair and rehabilitation of damaged terrace walls, irrigation canals and other facilities until the end of the year.

According to the DENR, the rice terraces were put on the endangered list in 1995 because of their worsening condition, which was attributed to “a dying culture of traditional practices.”

It noted that efforts to restore the terraces to their original condition were also derailed by the destructive Typhoon “Juaning,” which hit the country last year. Juaning caused the collapse of part of the Batad portion of the terraces.

Paje and Secretary General Virginia Miralao of the Unesco National Commission of the Philippines (Natcom) said they were thankful to the World Heritage Committees and the others who had worked to restore the terraces and the major irrigation systems in the area.

Paje said the Natcom had worked with the DENR, DA, National Commission for Culture and the Arts, and National Mapping and Resource Information Authority in conserving the terraces.