There’s a Spaniard in my soup | Inquirer Lifestyle ❮ ❯ 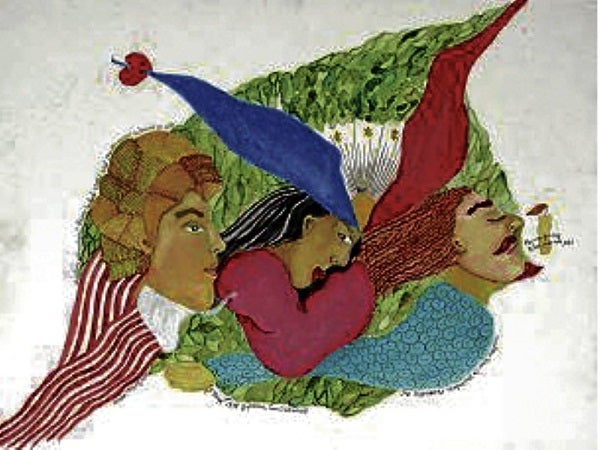 There’s a Spaniard in my soup

Anyone who was a child pre-World War II remembers the menfolk’s visits to one another’s homes. They enjoyed cigars or just conversation, sitting on sillas perezosas (lazy easy chairs) in the sala as if there was nothing ever urgent to do. If they were ilustrados (learned), they spoke in Spanish and all the kids around imbibed a smattering of it. “Si para si para buto ng sili!” we would mimic them.

Not surprising, therefore, how much espangol got into the soup of our native language. As in “saklolo” from “socorro”; “sugal” from “jugar” (to play a game), “sige” from “seguir” (to go ahead, or to follow). The source of asikaso is “hacer caso”—literally “to make a case out of” or “take care of.”

Who would think that “kuwan” got its literal meaning from the Spanish “cual,” which means “things that are not clear at the moment we are speaking.” As for the pejorative “beho,” it comes “viejo” or “old,” and does not mean “old Chinaman.”

José Villa Panganiban, director of the Institute of National Language, found enough “Spanish Loan Words in the Tagalog Language” to make a modest dictionary in 1961. A lot of those words were in use when I was growing up. The book awakened many nostalgic memories. Here are some of the lost terms and the memories.

HABITO has become the Tagalog “abito,” a devotional dress people pledged to wear, say, for one year, on a certain day in the week. It is to solicit a favor or as thanksgiving for one already granted. Popular with young ladies was the Lourdes, which consisted of a white dress with a long, light-blue sash (about three inches wide), tied around the waist and dangling in front such as the apparition in Lourdes wears.

Older women preferred the drab, dark abito of San Antonio with a soft rope belt with pompoms at the ends. It was worn on Tuesdays, which was his day. St. Joseph’s was a garish green with a yellow and green cord. Devotees of the Black Nazarene, also old women, wore their maroon abito on Fridays. Around the necks of most religious women then, was a “kalmin” (for Nuestra Señora del Carmen), which was a rectangular cloth with a stamped image, and attached to a ribbon. It was protection from whatever.

The Nazareno of Quiapo reminds me of how my father said he researched his study, the original “Heights and Weights of Filipinos.” (It won the first ever Republic Heritage Award). We lived in Quiapo then, and there was still no Quezon Boulevard. All the little streets, like ours, had to be demolished to give way to the new boulevard. (Escaldo was half demolished and our house saved).

Escaldo then led straight to the rear part of Quiapo Church where its altar was. It was appended to a makeshift structure with a steep ladder that opened to the foot of the Nazareno statue (protruding from its maroon attire). Every day, hundreds of assorted devotees climbed up that ladder to kiss or wipe the precious foot with their handkerchiefs.

The resourceful Dr. Cordero put his weighing scale and measuring stick at the bottom of that ladder. Everyone who went up had to step on it and also get measured. If asked why, Daddy replied solemnly, “Utos ng pare.”

JURAMENTADO. I first heard the word “juramentado” (from “juramento,” oath) from my cousin Leonor Orosa Goquinco who grew up in Jolo. Juramentados were not crazed fellows, as I had supposed, but fundamentalist Muslims who had vowed to kill all Christians in their path. They shaved their eyebrows and went, usually to the marketplace, to begin their killing spree.

SAYA, I was surprised to find out, was a Spanish word meaning “skirt.” It has since become synonymous with the skirt of our native costume.

BUKLE (bucle) was ringlet or kulot.

TENAZA was Spanish-Tagalog for curling tongs. It looked somewhat like a smaller “sipit” which was heated on live coals, wrapped with tin foil and applied to hair that wished to be curled. Tenaza was a tedious and dangerous process that kids in my generation with beauty-conscious mamas had to endure. Long hair, on the other hand, was braided or made into a “trenza” known as “trentas” or “tirintas”.

MAMELUKO (from mameluco) was a toddler’s outfit where uppers and lowers were contiguous. It had snaps on its “pundillo” (bottom).

SOMBRERO derives from the root word “sombra” or shade, and is also called “sambalilo,” “gora” or “bastipol” in Tagalog. (The last is a molded cloth hat shaped like a helmet which policemen of my day wore). All policemen carried a whistle or “silbato” (another Spanish-derived term).

Kids were afraid of the SANIDAD or sanitary inspector who went from house to house to inject or vaccinate the occupants.

SECRETA or sekreta was a secret service man (detective?).

No longer do I hear words like “melocoton” (for peach) or “tamarindo” for sampalok. The glass “dulcera” for thick jams like ube and makapuno is gone. Another object whose practicality has become extinct is the “sopera” or soup tureen and its accompanying “cucharon” (ladle). Even the late “fiambrera,” stacked dinner pail that could carry a lunch for the family, has been displaced by plastic Tupperware boxes. “Pizzara”, or blackboard, has been superseded by the white board.

I remember how often children were warned not to play with the “casafuego” or “sacafuego,” “house for fire” or “take fire,” interchangeable names for the kitchen match. I have also stopped asking for an egg that is “estrellado”, or sunny side up, because that term, too, has become obsolete.