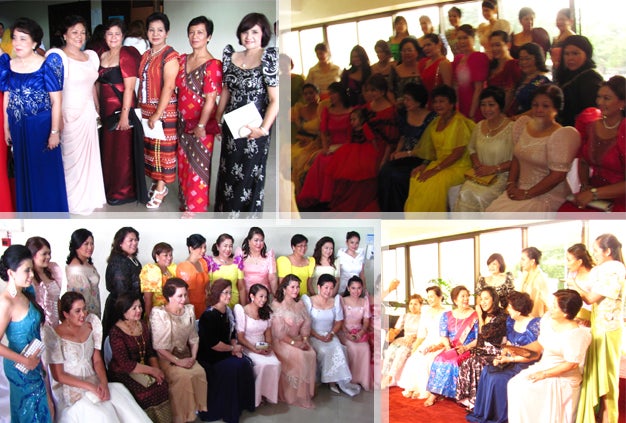 They wore their hearts on their sleeves and carried their politics on their backs, their bodices and their shirts.

Politics and fashion converged on the red carpet at Monday’s State of the Nation Address (Sona) and the opening of the joint session of the 15th Congress.

The annual fashion event at the Batasang Pambansa complex became more of a passion show as guests, government officials and lawmakers made sure that their stylish togs advanced their personal causes and advocacies as well.

Senator Loren Legarda, who confessed to the Inquirer last week that she was torn among several choices for her Sona frock, decided on a Paul Cabral piña dress made of recycled fabric.

“I want to prove that old, recycled and even something that’s borrowed can look good,” said Legarda, who recently put up the country’s first permanent textile galleries in the National Museum.

Former Representative Risa Hontiveros-Baraquel combined materials from several geographical, and sometimes opposing political, locales in her yellow fishtail dress made of abel Iloko from up north with a pair of detachable terno sleeves made of T’nalak material from the south made by Joel Acebuche.

“The use of two fabrics symbolizes the diversity and unity of Filipino cultures,” Hontiveros said.

As expected, representatives from party-list groups such as Gabriela, Bayan Muna and Anakpawis didn’t pass up the chance to wear their political statements.

Gabriela Representative Emmi de Jesus wore what she described as a “Luzviminda” ensemble consisting of a peasant-inspired dress fashioned from a bold checkered fabric from Iloilo. Her tapis skirt carried the words “Libre, Angkop, Batayan at Kagyat na Serbisyong Kalusugan” to reflect her advocacy of “free, appropriate, basic and immediate healthcare for Filipinos.”

Representative Rafael Mariano of Anakpawis directed the embroidered statement on his barong to President Benigno Aquino: “Hacienda Luisita, Ipamahagi Na!” (Distribute Hacienda Luisita Now!). His colleague, Bayan Muna Representative Neri Colmenares had the words “Free all political prisoners” embroidered on the left side of his barong. Its right side demanded for increased pension from the Social Security System (“Itaas ang Pensyon ng SSS”).

Cebu Representative Rachel del Mar’s political statement centered on austerity, as she claimed that she could have won a contest for the cheapest dress. “I don’t like spending,” she said, as she preened for the cameras in a white dress made by Cebu designer Didi Araneta.

Del Mar said the dress cost her only P4,000, and that she had opted for white so she could wear it again for other occasions.

“This is the first time I’m wearing this dress to the Sona,” she said, “but I’ve worn it a couple of times before.”

Tessie Daza, the wife of Northern Samar Representative Raul Daza, described herself as “an avid fan” of President Aquino and showed her support through the yellow ribbons painted on her nails. The motif extended to the beadwork on her yellow dress.

Some guests pushed for homegrown designers, among them Joni Villanueva-Tugna, wife of Cibac Representative Sherwin Tugna, whose black terno with appliques of pink sampaguita and cadena de amor was designed by Jo Rubio, her townmate from Bocaue, Bulacan province.

Monday’s event also had its share of the usual fashion plates whose clothes live up to the simple injunction, “Look good and stand out on the red carpet.”

Leyte Representative Lucy Torres-Gomez was her radiant self in an apricot-colored dress by Randy Ortiz. She and husband Richard made for a stunning pair, rivaled only by Senator Ramon “Bong” Revilla and wife, Cavite Representative Lani Mercado, who wore a green sari-tailored jacket with belt and scarf skirt by Rajo Laurel. The fabric came from Lanao del Sur province, Mercado said.

The Revilla couple was accompanied by their daughter Inah del Rosario, who wore a short lace terno, also by Laurel.

De Rossi also drew her share of attention in a nude terno with matching lace overlay by Cheryl Vicente. The former movie star was with younger sisters Maggie and Isabel, both in JC Buendia outfits.

Apart from De Rossi, Taguig Mayor Lani Cayetano, wife of Senator Allan Peter Cayetano, also stood out in a nude chiffon terno with a draped skirt and a bodice accented with a fine layer of silver lace by Cabral.

“I chose this color because it’s versatile and easy to wear,” said Mayor Cayetano. “I can easily slip into it as a wedding sponsor.”

Nasreen Garbin, wife of Ako Bicol Representative Alfredo Garbin, also opted for a nude terno made of embroidered lace and accented with a slim leather belt and cabbage rose. The form-fitting silhouette flattered Mrs. Garbin’s figure and belied the fact that she had just given birth six months ago.

“I insisted on the belt with a rhinestone buckle to make the outfit look younger,” she said.