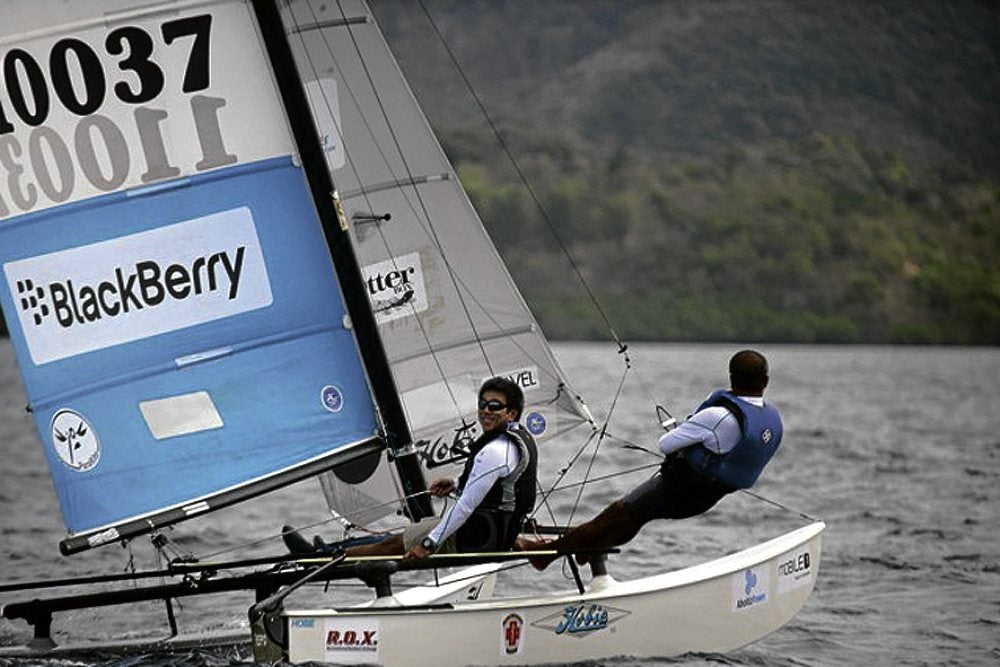 It’s just you, a 30-knot wind whipping your body and the open sea. Like a rollercoaster, the sailboat bounces up and down the two-meter waves. You give it a firm grip to keep from falling into the sea, and shift your weight to keep the sailboat from flipping over. A miscalculation could mean the sea swallowing you whole.

With your adrenaline shooting up at an all-time high and your brain processing too much information, you don’t have time to think about sharks and other potentially deadly forms of sea life. Or do you?

“Whenever you’re in the water, sharks will always cross your mind,” said Jun Villanueva, smiling. Villanueva, hobie cat competitive sailor, has been sailing for 10 years. Although he has never encountered a shark, he becomes animated when he talks about sightings of pilot whales, dolphins, manta rays and sea turtles.

Sailing, a relatively young sport in the country, he said, is slowly attracting more Filipinos. On the competitive level, the annual Philippine Hobie Challenge now has 50 percent Filipinos and 50 percent international competitors.

Sailing is an incredibly strenuous sport. It demands that your entire body be in good shape, and if it’s not, it will be in a few weeks. With just a harness and a hook attached to the boat to keep you from straying too far when you fall—and everybody falls off, just like every boat flips over—you’ll need strong arms and legs and a firm grip to keep your balance as you constantly shift.

And, oh those sheets (ropes used to control the sail) are really heavy, too, especially when up against a strong wind.

From your upper body to your midsection all the way down to your toes, sailing will give you a complete body workout.

“If you get a lot of wind, you’re exhausted after an hour. During light wind you can go on for two to three hours, depending on conditions. During competitions, there was a time when we were sailing for 10-11 hours,” recalled Villanueva.

This year, the BlackBerry 12th Philippine Hobie Challenge held at El Nido, Palawan, last March attracted world-class athletes for the first time, such as World Champions Mick Butler and Natalie Hill. While there are many hobie challenges in the world, none is as unique as the Philippines’.

The Philippine Hobie Challenge is a long-distance adventure race, with sailors sailing between islands and natural rock formations, hopping from island to island on a five-leg course. International competitions usually follow the standard, triangle racecourse.

In February next year, the course will kick off at the Hundred Islands, Pangasinan, and end at Anvaya Cove, Subic. Although it’s not yet official, Butler, said Villanueva, has expressed interest in coming back.

Villanueva said his claim to fame was beating Butler in the first leg this year. Butler, who was probably used to a triangle course, barely made it to the Top 5. He did, however, win the succeeding four legs and still emerged overall champion of the Philippine Hobie Challenge.

This year, Villanueva said plans are already underway to get the youth interested in sailing. Youth camps and training centers will be set up, and will be formally launched at ROX, Bonifacio Global City, The Fort, in September.

Anyone can sail, he said, as long as there’s genuine interest in sailing. Villanueva said you will get wet a lot and flip over many times. That’s just how the sport is. During this year’s competition, he said his boat flipped over at least three times. Getting the sailboat back up or yourself back on it is not easy, especially if the wind is strong.

The hobie is designed for racing. It is a very light sailboat with a huge sail. It will ride fast in perfect conditions. How fast? Maybe around 40 km an hour. Sure, that’s not a lot when you’re riding a car. But if you’re on a motorcycle, without a seatbelt, a 40 km per hour ride will give you a different experience. Better yet, try imagining yourself on a bicycle going downhill, hands off the break, until you reach that speed—a little terrifying, isn’t it?

“It is scary, especially on your first encounter with the open sea. You look back and you see the land disappear, and all you see is water, and the closest person sailing is about two miles away. It’s disconcerting. You want to hold on to that boat,” Villanueva said.

But take all the fear aside, and sailing is one of the best adventures you’ll probably experience, especially in the Philippines. Villanueva said he has been to so many islands in the country that he didn’t even know existed, islands that are undeveloped. Today, some of the remote islands they’ve been to are part of their outreach program, and they donate school materials whenever they can.

There are so many things you discover about your country when you’re sailing, he said, and you learn so much about yourself, too. In the end, he said, you just learn to roll with the punches.

Sailing is also a serious sport, so proper training is required. “Sailing is a lifetime of learning,” Villanueva said. “There’s the physics aspect—what’s the effect of wind on my sail; the navigation aspect—how do I get from this island to that island. You have to know how to look at the nautical chart, understand meteorology, the effects of tide and current, and so much more.”