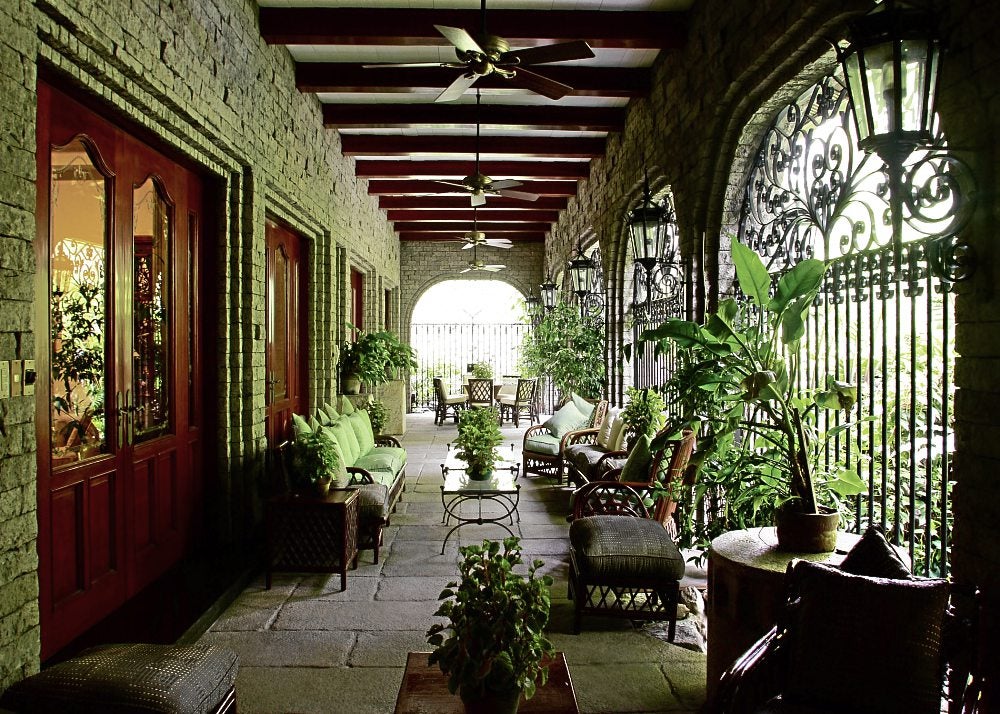 THE MIDCENTURY architecture with its adobe walls and ornamental grillwork at the lanai.

The ambassador’s home is filled with romance

A painting of a cluster of red poppies pops out of the earthy background of the foyer at the Chilean ambassador’s residence. Paulina Silva explains that the flowers are called amapolas in Spanish, which symbolize friendship and love.

It was her birthday gift to her husband, Ambassador of Chile Roberto Mayorga, on his birthday in May 2011. Each flower stood for a year in his life, but one flower that fell off the bouquet represented a “bad year.”

“But the more red flowers, the more love,” she demurs.

The residence of the Embassy of Chile exudes a certain romance. The perimeter walls are shrouded with giant ferns. The frontage is rimmed with topiaries of fukien ti and Chinese hollies on the ground. The palm trees and an Indian tree lead the eye to the heavens. The poolside and pond are adorned with clusters of bougainvilleas, begonias, kamuning, giant ferns, bromeliads, spathyphyllums and frangipanis.

The architecture is typical of a mid-century bungalow, with long rooms and Spanish references such as adobe walls, intricate grillwork and arched openings. For visual continuity, Paulina brings garden plants inside the house.

When the Mayorgas moved in, Paulina unleashed her inner artist and decorated the walls with her paintings.

“I had to work fast because we were already hosting diplomatic receptions and dinners,” she says.

Paulina discovered her artistic talent when she was 5 years old, but her parents had more pragmatic plans. Through the encouragement of her husband, she pursued her passion.

Her first works were paintings of the Blessed Virgin that are displayed at the foyer. “I felt very alone,” she said of when she worked on the religious icon. The colors of her palette were somber.

However, as she got active with the Spouses of Heads of Mission, a group of diplomatic wives, and picked up her tennis racquet, the colors of her paintings became more solid and brighter.

In the first two months, she produced 15 paintings, some of which were given as presents. Paulina derived inspiration from the works of Filipino masters such as Fernando Amorsolo and his bucolic landscape.

Her subjects are similar—a cow hauling a cart in Valle Nevado (Snow Valley) in Chile, roosters and an impression of a farm lined with birch trees. A painting of a working farm wife, which depicts women as breadwinners, strikes a familiar chord with Filipina visitors. One of her most challenging subjects are horses in the farm.

On her fascination with farm life in her country, Paulina explains, “Chile has a beautiful landscape, particularly the south where there are many farm lands.”

She is making a study of local color, a female vendor selling bananas.

As a hostess, she is assisted by the kitchen staff, who is quite adept with Chilean fare. As an appetizer, the Chilean empanada, is a signature. It has a flaky crust filled with beef, egg, olives and raisin.

Paulina says the menu highlights seafood, which Chile is known for. The salmon could be a canapé teamed with cream cheese or a main dish with lemon marinade. Potato dishes are also a staple in their culture. But for Filipinos who don’t have adventurous taste buds, the hostess serves adobo and rice.

In informal lunches, Paulina offers the cazuela, a popular Chilean meat-and-potatoes comfort food. Similar to our pochero, it’s a stew filled with green beans, corn meal or corn, and chunks of beef or pork with onions and bell pepper.

Then there are the charquican, a dish with mashed potatoes, squash, beef and onions; tortilla de papas or thick omelet with potatoes and curanto or shellfish, meat, potatoes and polenta, layered with leaves, and cooked in a pressure cooker. Her version of paella is made from red rice, pork, longganizas, shellfish, clams and scallops.

The desserts are similar to our local sweets such as leche asada or lemony custard, manjar blanco or milk-based pastry similar to our maja blanca, alfajores or sweet biscuits, and tortas de mil hojas, a Chilean version of our sansrival.

When the Mayorgas are not entertaining VIP’s, they host their favorite charity group at the residence during Christmas. “We started in Chile, when we would help out centers for children who need help. We would serve lunch and bring presents,” says Paulina.

Meanwhile, Ambassador Mayorga is promoting his advocacy on raising human consciousness. Last year, the Embassy of Chile organized a literary contest on calidad humana or compassion and humaneness in an intensely materialistic world. This year, the embassy is launching a photography contest on “A Smile for The World,” which was inspired by the warm Filipino smile despite adversities. He added that caption should match the power of the image.

Says Mayorga, “The world hears mostly the negative aspect of the Philippines. But this country is rich in calidad humana. The aim of this contest is to let the world know that the Philippines is peaceful and friendly. It’s a positive country. ”