Did you know the Kremlin is full of churches? | Inquirer Lifestyle ❮ ❯ 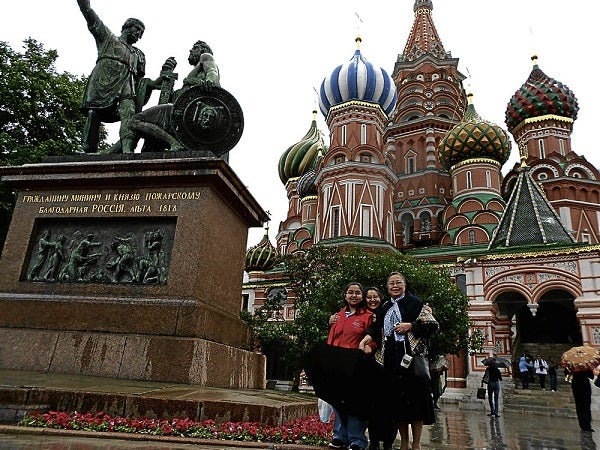 Did you know the Kremlin is full of churches?

I never in my wildest dreams thought I would ever go to Russia. But when I was planning my six-month sabbatical trip to Europe, a Scholastican, Marla Lazaro Beyer, invited me to visit her and her family in Moscow. Her husband Philip works as attaché in the American Embassy there.

So after a month of spiritual renewal in Dublin, I flew to Moscow.

I arrived at 10:55. A driver picked me up at the airport. His name was Vladimir, and he spoke just one word to me: Rosinka? It turned out Rosinka was the subdivision where Marla and other embassy officials and foreigners lived.

If in Ireland everything is small, in Moscow, everything is big. Our first day touring covered the important places of the city, concentrating on Red Square. The most prominent building there is, of course, St. Basil’s Church, the church with all those colorful towers. It really looks amazingly beautiful.

From there, we went through the grandest mall I have ever seen, the Gum, which looks like a palace but is full of elegant signature shops. We saw a sign saying “historic toilet”; the guide said it is the most fabulous toilet in the world, and you can enter if you pay 83 rubles.
Then we went into the Church of Kazan, another beautiful church built to commemorate the victory over the Polish. (The St. Basil Church commemorates the victory over the Tartars.) The Red Square used to be a moat, and has as a boundary the wall of the Kremlin. In the middle of the square is the tomb of Lenin.

Along the way, our guide Tatiana would point out the house or statue of Tolstoy, Chekov, Tchaikovsky and other famous people. She also pointed out the KGB headquarters, which gave me the shivers.

We visited the Cathedral of the Orthodox Church, the Christ the Savior Cathedral, which is massive. It is a pity we could not take pictures inside; it is hard to describe—the beautiful icons, the intricate designs, the gold everywhere were just breathtaking.

In the museum below is a temporary exhibit of about 50 icons totally covered in pearls and semi-precious stones.

We visited the grounds of an active monastery of nuns, the Novodevici, beside a lake which our guide said was the inspiration for Tchaikovsky’s “Swan Lake.”

Along the river, Tatiana showed us the metal “trees” hung with locks. After their weddings, couples go there, hang a lock on one of the branches, and throw the key into the river to symbolize their wish that their union will not be broken.
‘Indifference’

Across this is the Swamp Square, where they used to execute criminals condemned to death. At the end of the square, which is now a garden, there is a beautiful arrangement of statues by a famous sculptor, entitled “Evil Deeds Done to Children by Adult Vices.”

The different statues personify these evils like prostitution, child labor, alcoholism. In the middle is a statue of a person covering his ears. And the label of the statue reads, “Indifference.”

Around the city are seven buildings built by Stalin which are exactly alike, called the Seven Sisters.

We also went to the cemetery where famous people are buried. A ballerina has a statue of the dying swan on her grave.

The next day we went to the Kremlin. When you hear “Kremlin,” you imagine a grey, sinister place with cloak-and-dagger activities going on. Actually, it is a beautiful place; it is like entering a castle.
Inside is the office of the President (like the White House). There is the glass building by Stalin, and there are the barracks topped by five golden domes. There is also the house where Lenin lived and worked.

And believe it or not, there is a Cathedral Square where four cathedrals face each other. The Cathedral of the Assumption is the main church, where the Tsars used to be crowned. The amazing thing is that this church has every surface of its wall covered with icons; not one inch of wall or ceiling space can be seen. Did you ever imagine that the Kremlin would be full of churches?

The last thing we visited was the armory, which should have been named the treasure house because there are more treasures than armor. Our guide Igor told us the story of the Romanov family by showing us the different gowns they wore and talking about the intrigues, the love-hate stories, etc.

Did you know that Catherine the Great was actually just a German girl from impoverished nobility who was chosen by Sophie, the sister of Peter the Great, to be the bride of her nephew, Peter III, who was a weakling?

Crowns of the Tsars

There was a glass aparador with the crowns of the Tsars studded with pearls, diamonds, amethysts, emeralds and other precious stones.

Another room was full of precious gifts from neighboring countries. There was a room full of carriages which they used during ceremonial processions. And there was a beautiful collection of original Fabergé eggs.

Our next stop was the Tretyakov Gallery, which is the unsurpassed museum of Russian art. It was the collection of a rich merchant and industrialist, Pavel Mikhailovich Tretyakov, who donated his gallery of more than 1,500 works of art to the Moscow City Duma. It now boasts 100,000 works.

Then Igor brought us to the most important metro stations, which looked more like palace corridors than metro stations. Each station was dedicated to some victory—against Poland, Napoleon, World War II, the annexation of Kiev, the rescue of Ukraine. There were always beautiful chandeliers hanging in the middle of the hall.

There is a station in the Place of the Revolution where people rub the nose of a dog statue held on a leash by a soldier. This ritual has eroded the dog’s nose, like the toe of St. Peter in St. Peter’s Basilica in Rome.

On our third day, our goal was shopping at the Izmailovo Market. This is like Baclaran or Divisoria, but full of matrioska dolls, icons, and other Russian handicrafts. For lunch we bought barbecued lamb and salmon from a stand. It was delicious!

Razed to the ground

On our fourth day, Tatiana brought us to the Tsaritsyna, the palace of Catherine the Great in the outskirts of Moscow. There actually was an original palace built by Paul, the son of Catherine the Great, whom she hated and whom she suspected was plotting against her. So she had this palace razed to the ground, and had another built which she never got to occupy before she died.

The rooms are filled with statues and paintings of Catherine the great, her sons, and collections of archaeological artifacts and other works of art. It boasts two beautiful ballrooms shimmering with gold, and is said to give one a glimpse of the palaces of St. Petersberg.

The last pavilion housed a collection of the dresses of Russian actresses and of the famous Russian ballerina, Ulanova. We went home through the woods to another station of the metro, and when Tatiana traced how far we had walked, including the walking tour of the palace, we realized that we must have walked about five kilometers!

On our fifth day, we visited the Pushkin Museum, which has a collection of European art—Spanish, English, Dutch, French, and German. It also has plaster copies of famous Greek and Roman sculptures.
In the afternoon we went to the Spaso House, the residence of the US ambassador to Russia, because Donna, his wife, had invited us for tea. It seemed she Googled me and told Marla she wanted to meet me.
She is a very simple, friendly woman, a Catholic who studied with nuns and who has an advocacy called Moms Rising, looking after the welfare of mothers. She asked me all about my work with women. She also invited two Filipino men who work in the house, and we talked about the Filipinos in Russia.

My second to the last day in Russia was spent with Filipino workers from the Filipino Association in Russia (FAR). They organized a river cruise along the Moskova River, and I was asked to give an inspirational talk during the program. Then the boat docked at a picnic ground in a wooded area of birch trees. I was asked to lead in shibashi, and another woman taught some yoga postures. And of course, we had pictures galore.

Even in Russia, “kodakan” can never be absent from Filipino gatherings.