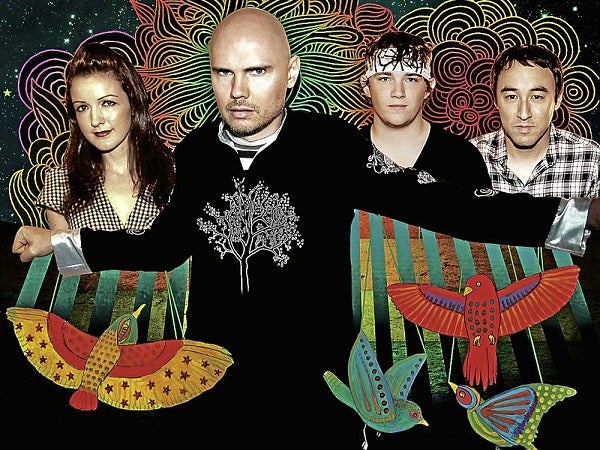 Grammy award-winning rock band The Smashing Pumpkins will be bringing its “Oceania” Tour to Philippine shores on Aug. 7 at the Smart Araneta Coliseum.

Formed in Chicago in 1988, the group was responsible for a lot of songs that defined the alternative music era and provided the soundtrack of one’s teenage years. There’s hardly any ’90s kid who hasn’t grown up waxing sentimental to “Disarm” or “Landslide,” head-bopping to “1979” with friends, or letting off some steam with “Bullet With Butterfly Wings” (or maybe even moshing to “I Am One” and “Tristessa,” if you’ve already been a fan way back when Corgan still sported an actual hairdo).

The original quartet made up of Corgan, guitarist James Iha, bassist D’arcy Wretzky, and drummer Jimmy Chamberlin got their break with the release of their debut album “Gish” in 1991. This was soon followed by a string of certified multiplatinum albums that aptly described the tumultuous evolution of the band’s sound—from the angst-ridden hard rock overtones of “Siamese Dream” to the ambitious, sweeping sonic landscapes of “Mellon Collie and The Infinite Sadness,” and to the more subdued goth-electronica vibes of “Adore” and the rock opera hybrid “Machina/The Machines of God” and “Machina II.”

But long-standing issues and conflicts ultimately contributed to the band’s waning success and dissolution of the original lineup in 2000. Chamberlin reunited with Corgan for a time, first with the short-lived supergroup Zwan, then with the Pumpkins’ comeback album “Zeitgeist.” But it was Corgan, drummer Mike Byrne, ex-Veruca Salt bassist Nicole Fiorentino, and rhythm guitarist Jeff Schroeder who would eventually form the final lineup for the all-new Smashing Pumpkins in 2010.

Their new album “Oceania,” released just last June, debuted at no. 4 on the Billboard 200 chart and no. 1 on the Independent Albums chart, making it the band’s seventh top 10 album to date. Corgan dubbed it “an album within an album,” as it is part of the ongoing 44-song concept project “Teargarden by Kaleidyscope.” The track “The Celestials” serves as the first single.

Unlike in the earlier albums, where Corgan played most of the instruments himself on top of the vocals, all four members contributed to the making of “Oceania.” Truth be told, it’s an album that grows on you. At first listen, it feels somewhat alien, even with Corgan’s ever-reliable wailing. But it’s also a sign that it’s no longer a one-man show; after years of alleged creative tyranny, the front man seems to have learned the meaning of the word “teamwork,” which creates a different atmosphere altogether. As one becomes acclimatized to that fact, it becomes apparent that the music still possesses that spacey, dreamlike quality and raw emotion that the band has been known for, but with a more organic feel.

If anything, “Oceania” sounds like a band trying to reestablish its place in this day and age without losing its identity in the process, which can either be good or bad, depending on who’s listening. Either way, longtime fans probably won’t be able to resist the lure of a new album, especially one that Corgan described as the Pumpkins’ “best effort since ‘Mellon Collie.’”

For those who are wondering about the set list content, the band plans to perform a balanced mix of classic anthems and new tracks, utilizing video mapping to create stunning visuals that go well with the music. The tour began in late May with Spain as the Pumpkins’ first stop, hopping from Europe to Australia and eventually to this side of the world. It’ll be interesting to see how the “new” members will put their own spin on the old favorites onstage. Until then, we’ll be taking a much-needed trip down Pumpkin lane with the band’s colorful 24-year catalogue.

“The Smashing Pumpkins Oceania Tour: Live in Manila” is presented by Little Asia, Russian Standard Vodka, FOX, and Music Management International. For tickets and inquiries, call TicketNet at 911-5555 or visit www.ticketnet.com.ph, or contact Charlemagne Lim at 0917-8334223.