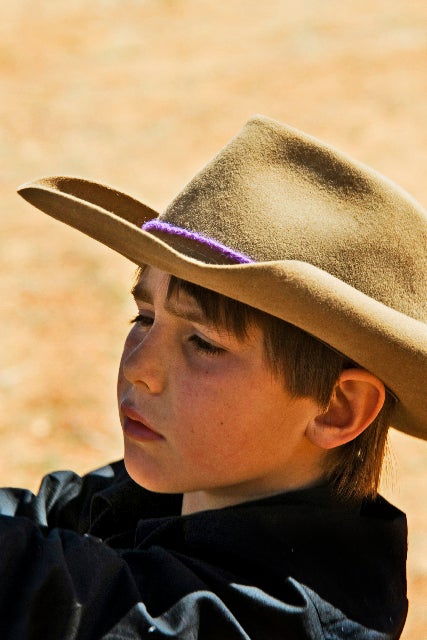 An Australian boy is pictured in a cowboy outfit. Australia may pride itself on its sporting prowess, but a new study has revealed that most of its children struggle to run, jump, kick and catch a ball. PHOTO FROM AUSTRALIAN-CHILDREN.COM

SYDNEY – Australia may pride itself on its sporting prowess, but a new study has revealed that most of its children struggle to run, jump, kick and catch a ball.

Research led by the University of Sydney has uncovered an overall decline in children’s ability to perform the skills at the appropriate age – with most seven year olds yet to have mastered leaping, running and jumping.

“The majority of our children don’t have these skills,” Louise Hardy from the university’s School of Public Health told AFP on Sunday.

“It’s a total myth that kids will naturally acquire these particular skills. They do need some tuition.”

The study, which analyzed data gathered in 2010 from up to 8,000 school children aged five to 16 years from New South Wales state, found that girls performed better at movement skills such as running or leaping.

But boys had a greater mastery of those used in ball sports such as kicking and catching.

Overall, the data revealed a poor performance on movement skills, with only about 30 percent of children aged nine and 10 able to run properly.

And only about five percent of girls at this age had mastered throwing or kicking a ball.

Hardy said the key reasons for the poor performance on these skills was the lack of sports teachers in primary schools in New South Wales state, the country’s most populous, and the fact there were not enough parents kicking a ball around with their kids.

By high school, most students had improved but Hardy said that the slow development of these activity goals could have health consequences for later in life.

Research suggested that if a child failed to master the basic “building blocks” of physical activities, they would not have the skill or confidence to do them and this could impact their overall fitness, she said.

The research, conducted in collaboration with the University of Wollongong and Southern Cross University, raised serious issues because low fitness is associated with an increased risk of diabetes and heart disease, Hardy said.

“It’s just important that we get our kids out there moving, and teaching them how to move properly,” she said.