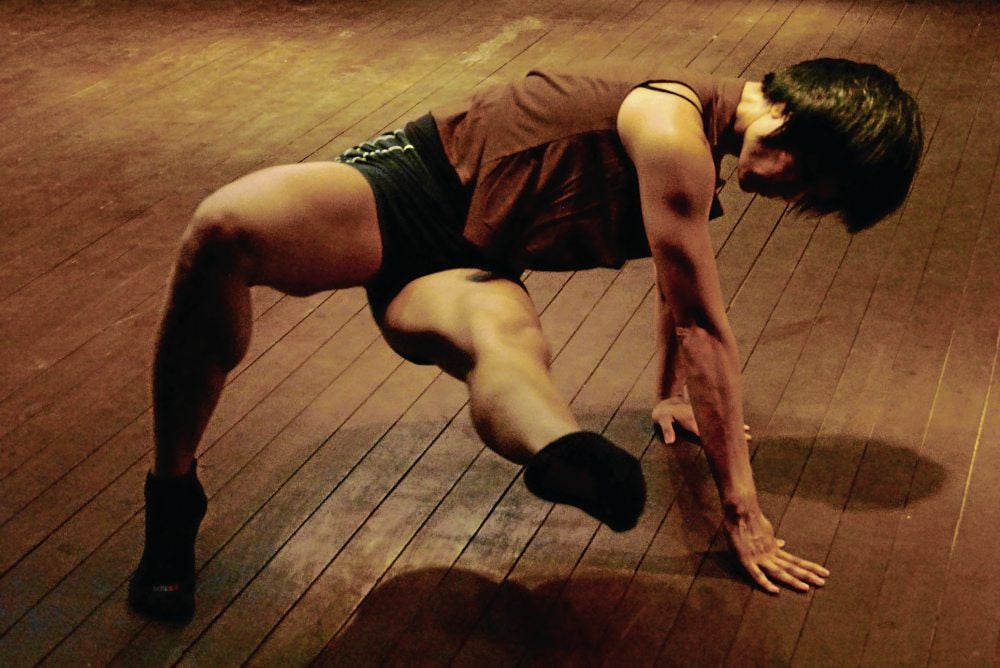 Visit choreographer Agnes Locsin’s residence-studio in Davao City and her family’s farm on the border of Mintal and Tugbok, Davao del Norte, and you’ll discover that her passion for nature is just as important as her dance.

Walking through her farm, Locsin gets so absorbed talking about her plantings—as if they were her children.

So it comes as no surprise to this writer that Locsin would mount a series of works revolving around her passion. “Alay sa Puno” is a work-in-progress consisting of extended solos on Philippine trees.

The “Alay sa Puno” series was borne out of Locsin’s concern for the environment. Appalled by the floods in Cagayan, Iligan and Davao due to the deforestation, Locsin started her work on the various aspects of the trees. Locsin’s brother, who works in Compostella in Davao del Norte, whose main economy subsists on agriculture, was also alarmed by the dwindling numbers of trees. She said she couldn’t get even get redwood seedlings from there to plant in her farm.

“Kung ano ang galit ko, lumamalabas sa sayaw. (My angst is expressed through dance.) This is not propaganda. I love tree plantings, but even the subdivisions in Davao are cutting down the trees,” said Locsin. “My statement is that I want to build a forest on stage as in real life.”

The first installment of “Ugat: Unang Galaw” (Root: First Movement), performed by Biag Gaongen depicted the qualities of the roots of different trees. The choreography capitalized on the sinewy strength and unflagging stamina of Gaongen. The second, “Dahon: Pangalawang Galaw,” brought to the fore Georgette Sanchez’s dramatic intensity and her gymnastic bravado.

Every year, Locsin will focus on a forest-themed choreography which will climax with a “forest” by 2014.

The latest work, “Puno,” stars Gaye Galiluyo and Sanchez, who came home from their base in Germany to collaborate with Locsin.

The month-long preparation was just as important as the end product. Locsin’s rehearsal was an exchange—an instant, spontaneous give-and-take of energies; a mutual unraveling and reciprocation in the creative process.

Both demanding and admiring, Locsin goaded them to be risk-taking, virtuosic and they volleyed back her motivations. The process was both sagacious and intimate that one couldn’t tell which came ideas came from the choreographer and from the dancers.

Just as the tropical landscape in Locsin’s farm are hardy, vigorous and untamed, you can expect those attributes in the dancing. Locin imbues her signature choreographic qualities—impulsive, reflexive, aggressive balanced with quiet moments of control.

“In ‘Puno,’ the dances are about survival in life yet rising above the odds,” explained Locsin. “Gaye and Georgette dance like hardwood. They are very strong. Yet they are like yin and yang.”

Galiluyo mesmerizes with her razor-sharp movements and athletic prowess, owing to her mixed-martial art technique. On the other hand, Sanchez exudes a softer but tough quality.

The series is produced by the Carmen D. Locsin Foundation. In this series, the dancers are stripped down to leotards or dance undergarments. “I want to show off their bodies,” said Locsin.

Fans of Locsin eagerly anticipate Locsin’s choreography. She lamented the challenges of self-produced works, getting meager support. Is any patron listening?

Still, another of Locsin’s self-produced work is her definitive book, “PhilippineNeo Ethnic Choreography (A Creative Process),” published by the UST Publishing House.

Locsin built a reputation for offering new perspectives in traditional dance and rituals in an earthy and electrifying manner. She has been lecturing on her works that she said derive from local culture and are reworked using a universal idiom. A book seemed to be a natural evolution from that.

The choreographer pointed out the dearth of dance books in the country, particularly those written in the local context. On the other hand, there were many choreographers in the provinces who had the talent but needed the solid technique on dance composition as opposed to just putting movements together.

“I buy my books abroad,” she said. “What about those who can’t afford to travel? This is not a coffee-table book. It’s for those who want to choreograph.”

“The first chapter discusses my guidelines for choreography. In the second, I explain how I transform the ethnic to Neo Ethnic,” said Locsin. 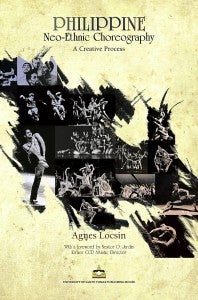 For instance, her work “Encantada,” based on the libretto by Al Santos, about how man’s greed pillaged the environment, appropriated the moods and motifs of Muslim and Cordillera styles and melded them into the contemporary idiom.

“Babalyan” (not to be confused with babaylan) drew inspiration from the rituals of the Tagbanuwas in Palawan. It was about a priestess going into a hypnotic derangement with the aid of three men. When it was shown at the Tokyo International Choreography Competition, the European judges found it too jagged. However the Asian judges thought her piece should have won the grand prize instead of second place. ”

Locsin also choreographed mythic heroes such as “Hinilawod” and “Labaw Dunggon,” based on an epic in Panay.

Locsin said the book explains that it’s not about mixing styles for their sake. She shares the process of transforming them for the stage while respecting tradition, putting the movements in the right context to maintain artistic integrity.

Locsin has also been inviting Manila-based choreographers in her studio to hold workshops, imparting techniques to raw talents in the provinces.