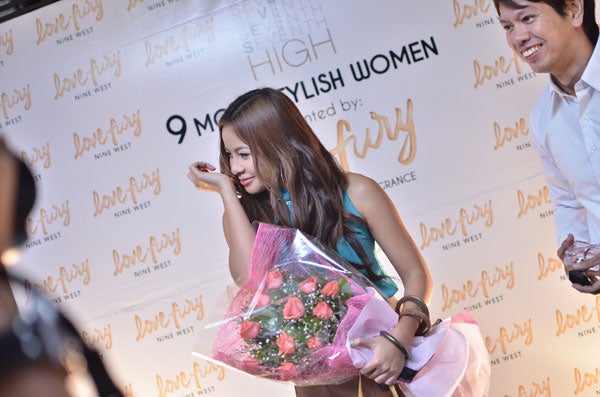 When shoes and fragrance create ‘ultimate attraction for women’

MANILA, Philippines – Shoes and fragrance combine in the latest fragrance from Nine West “Love Fury” to create the “ultimate weapon of attraction” for women.

Nine West recently launched their first fragrance named “Love Fury” that is creatively packaged in a glass bottle with a bottle cap that appears like a shoe’s high-heel “illustrating the parallel synergy of footwear and fragrance as powerful weapons of attraction.”

“There is a strong connection between the seductive statement that a woman makes with her shoes and fragrance, as both are seen as ultimate weapons of attraction,” Fred Allard, Creative Director of Nine West, said in a statement released during the Love Fury fragrance launch.

“A woman’s craving and insatiable desire for fashion and obsession for shoes is matched only by her addiction to fragrance. As an established leader in fashion footwear, Nine West will take an important step by introducing the Love Fury fragrance,” Nine West said in their statement.

The fragrance is for women who love to wear high-heeled pumps and using fragrances to seduce. “The Love Fury woman is sexy and passionate, but above all, once noticed, she is not easily forgotten,” said Jean Madar, the head of Inter Parfums Inc, which collaborated with Nine West to create the fragrance.

The fragrance is made with several ingredients such as red berries pulp, sandalwood, orris flower, sensual musk, wood, and amber.

As part of the formal launching of the fragrance, Nine West awarded nine of the most stylish women who symbolise the Love Fury fragrance.

Leading the way among the awardees was Cristalle Henares, daughter of Dr. Vicky Belo and General Manager of Belo Essentials. Also awarded was model, host, make-up artist, and Author of ‘Face to Face: The Healing power of Make-up’, Bianca Valerio.

Ejercito Inc. and SDMI CEO Jerika Ejercito with models Hicks Yao and Vanessa Matsunaga rounded up the list of awardees of Nine West.