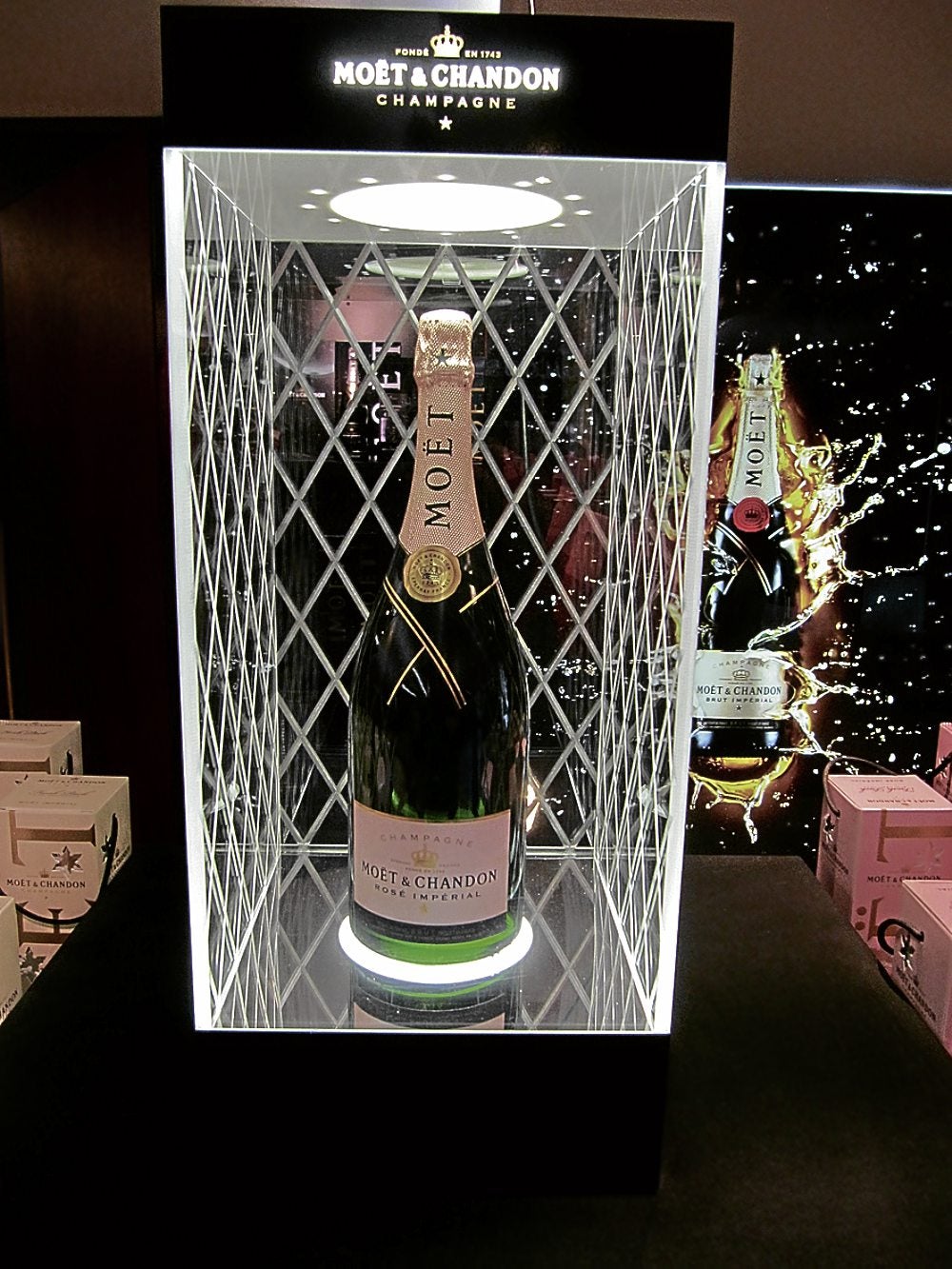 Champagne–why it can come only from the French region

Today’s pop quiz: What’s the most expensive avenue in France? If you answered Champs Elysees in Paris, you’re probably not that far off. But according to Frenchman Pierre-Louis Araud, there’s a more expensive stretch of road in France—it’s just outside the center of Epernay, a quiet city 150 km east of the French capital.

“This is the first structure to be built along Champagne Avenue,” said Araud, brand ambassador of Moët & Chandon, referring to founder Claude Moët’s well-maintained 18th-century house.

“Because of the value of the vintage bottles we have in the cellar, this area is more expensive than Champs Elysees.”

Epernay is the heart of France’s Champagne region, where leading champagne-making houses such as Moët & Chandon are based. With a relatively small land area of 34,000 ha, Champagne’s sloping terrain, chalky soil and mild weather have made it ideal for wine-making, especially of the sparkling variety we now call champagne.

Led by Olga Azarcon, Moët Hennessy’s country manager in the Philippines, we toured Moët’s headquarters in May, including a former Benedictine abbey a few kilometers down the road where Dom Pierre Perignon once worked and is now buried.

Dubbed by the French as the father of champagne for his pioneering work on the bubbly, the 18th-century Benedictine monk worked tirelessly to help the poor by selling the best 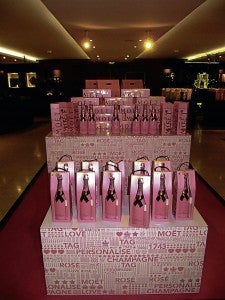 varieties of sparkling wine to the rich, including King Louis XIV. His statue has a special place of honor just outside the company’s main building.

A few decades after Dom Perignon’s death, the Benedictine monks left the abbey and its surrounding vineyards. But Claude Moët, who was by then already settled in Epernay, saw the land’s potential and bought it. He donated the church back to the city, but kept the surrounding land for himself.

His move earned for Moët the distinction of being the first land-owning champagne producer in the region. Over the centuries, his descendants continued acquiring more land.

Today, the house has 1,200 ha of the region’s best land, producing some of the finest grapes. But that’s not enough, so the company still needs to buy more grapes from local farmers.

Like cognac produced in Cognac, only champagne produced in Champagne can be called and marketed as such, according to French law. Any producer outside the region who insists on calling his bubbly or sparkling wine champagne is guilty of misrepresentation. The law is not without its basis.

“If you go farther north, it would be impossible to produce the kind of grapes we need because the area is too cold,” said Araud. “If you go farther east, the weather is subject to extreme temperatures in summer and winter because the land is flat. And since it’s near the ocean, the west tends to generate a great deal of humidity.”

Not only is Champagne’s chalky soil great for storing water, it also absorbs the sun’s heat during the day and releases it at night to keep vines from freezing in early spring, before the start of another grape season. By September, selected grapes of pinot noir, pinot meunier and chardonnay varieties are pressed minus their skin and stored in steel vats.

White wine, which results from this initial fermentation process, is bottled individually with a bit of yeast and sugar and allowed to undergo a second fermentation for at least six months. The “birth” of champagne happens once yeast starts eating the sugar, said Araud.

The byproduct of this process is carbon dioxide or trapped bubbles that soon transform plain white wine into sparkling wine.

Midway into the process, Moët’s experienced hands uncork those bottles and extricate the yeast either manually or with the use of machine. Bottles are positioned in such a way that some of the champagne pops out with the yeast as each bottle is opened.

The same bottles are permanently corked, aged and later shipped within and outside France as Moët & Chandon.

Experience has taught the winemakers to carefully time the extraction process—not too long or too soon. A moment longer would mean losing more champagne with the yeast than what’s necessary. A moment too soon, and some of the yeast is bound to stay inside the bottle.

“Should they choose to use a machine, which, to tell you the truth, is more efficient and has no effect on taste, they put the neck of the bottle in a freezing solution,” said Araud. “The ice cube freezes the yeast, and once you open the bottle, pressure would expel both ice cube and yeast.”

Except in vintage years, the most recent of which is 2002, Moët’s in-house winemakers and tasters take pains to produce a consistent blend by mixing available wines to produce trademark champagne of non-vintage quality. There are no recipes, because everything depends on mixing what’s available.

Otherwise, it’s the head sommelier of each house that decides whether to declare a year vintage or not.

“It’s a tradition in Champagne, when the year is special enough, to come up with a vintage,” said Araud. “But that doesn’t happen every year. When it comes to vintage, the goal is not to be consistent, but to reveal the singularity of the year.”

That’s why there’s a saying in Champagne that while “ordinary” champagne is made by men, vintage champagne is “made” by God. This saying could very well apply to the whole of France, whose wine makers, unlike so-called new world producers like California, Australia, South Africa and Chile, shun radical forms of technology and stick to traditional ways of producing spirits.

And with today’s weather getting more unpredictable by the year, expect not only Moët, but also the whole of Champagne to produce more vintages.

The number of bottles in Moët’s treasure trove of a cellar is confidential information, said Araud, but they easily run in the thousands, as Moët’s cellar is a mini road network in itself that spans 28 km. To give you an idea of how rare some of these bottles are, the cellar’s vintage section houses champagne dating back to 1892.

“It’s still very good,” Araud assured our group, referring to Moët’s prized vintage that predates Philippine independence by six years. “We can keep bottles of Moët for a very long time in the cellar and still keep their quality.”

Moët, for instance, first entered the Chinese market, now a major champagne consumer, in 1911. It called for a centennial anniversary party in 2011 in Beijing that required the company to open at least 500 bottles of its vintage 1911 champagne.

“It was a good thing 1911 was a vintage year,” said Araud. “We had enough vintage bottles to offer our guests.”

Thanks to several factors like the use of premium-grade yeast and the constant temperature resulting from the cellar’s chalky walls, Moët is able to ensure the quality of its produce longer.

Starting out as a family-owned company sometime in mid-18th century, Moët & Chandon is now a publicly traded company with a huge global presence.

To gain more leverage in an increasingly competitive market, it partnered with cognac-maker Hennessy in 1971 to form Moët Hennessy.

In 1987, the company merged with luxury bag maker Louis Vuitton to form LVMH, one of the biggest and most diverse groupings of luxury brands today.

Over the centuries, Claude Moët’s house grew to include an adjacent medium-rise headquarters, posh receiving area and souvenir shop.

The company has retained a garden with a huge sephora tree outside the study where Jean-Remy Moët, grandson of Claude, entertained the likes of French ruler Napoleon Bonaparte, Francois II of Austria, Czar Alexander I of Russia, and Grand Duke Nicholas.

Jean-Remy and Napoleon became such good friends, said Araud, that Napoleon, while passing through Epernay on his way to his many battles, would often spend the night in Jean-Remy’s house. The latter, who was by then mayor of Epernay, had the house extended to accommodate the emperor and his party whenever they were in town.

“Jean-Remy was perhaps the first in the region to practice PR and market research when such research tools were totally unheard of,” said Arnaud. “He had a team who made people sample the champagne for the sole purpose of getting feedback to help him improve his products.”

Legend has it that every time Napoleon passed by Epernay before a battle, he ended up winning that battle. The only time he didn’t pass by Epernay, Arnaud added, was when he went directly north from Paris. History would bear this out, as France’s “emperor for life” lost, and lost badly, in Waterloo.

Jean-Remy’s friendship with Napoleon also drew the latter’s enemies to Epernay. But, rather than see his beloved city destroyed, Jean-Remy would open his cellar for Napoleon’s enemies to inspect.

“While soldiers were searching for Napoleon in Jean-Remy’s cellar, the officers were in the garden having champagne with Jean-Remy,” said Arnaud. “He befriended the officers to save his city. He was very pragmatic because for him, it was free sampling. Because champagne was quite new at that time and people were unaware that it existed.”

Across from the original house, which has undergone countless renovations through the wars and upheavals France found itself in, is the family’s summerhouse. It is here where Moët & Chandon officials now entertain guests, from celebrities to heads of state, journalists to big-time buyers.

The Chandon name came into the picture when one of Jean-Remy’s children, Adelaide, married Pierre-Gabriel Chandon de Briailles. With Jean-Remy’s son, Victor, the two men expanded the house’s operations by buying more land, introducing champagne variants such the Brut Imperial (the house’s tribute to Napoleon) and finding a remedy for the crippling phylloxera pest plaguing Champagne’s vineyards.

In short, the pair laid the groundwork for Moët & Chandon as it cemented its reputation as a global brand at the turn of the 20th century.

And taking their cue from Jean-Remy, Moët’s future stewards later seized on the brand’s image as a celebratory drink by sponsoring Formula 1 races. From then on, the iconic image of a frothy bottle of a shaken and freshly popped Moët & Chandon champagne became de rigueur as a victorious driver and his team celebrate their win.

“Champagne is sparkling, fresh, easy to drink and share with friends during parties,” said Arnaud. “It instantly brings joy to the room. You can probably even drink champagne during a divorce to celebrate your freedom. In victory, you deserve it. In defeat, you need it.”

Napoleon dropped by the place on his way to his many battles–except on his way to Waterloo… ‘In victory, you deserve it. In defeat, you need it’