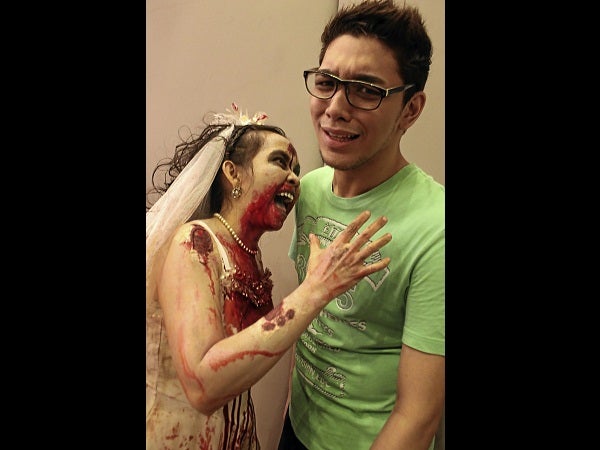 “The response to the concept run was tremendous,” said Angelo Cruz of Recreate Events, who organized the zombie run and another one in Laguna last April.

“It just shows that Filipinos are ready for a new generation of concept runs. We feel very honored to be chasing all of these people tonight,” he said.

The organizers filled up every slot only within eight days and opened two more waves—the Wave Last Chance and Wave Desperate—due to public clamor.

With 200 zombies trying to take away flags that serve as “lives” tucked in runners’ belts, the sprinters survived the race and didn’t tap out even with bad weather.

“It’s dark, it’s raining, it’s more fun and people feel that they’re really running for their lives,” said co-organizer Judy Cruz-Malabanan, “so we stationed the zombies at almost every turn and medics in the right places.”

There were 200 zombies, 60 of whom were hired, and the rest were volunteers. Some reported to have watched shows for them to internalize their roles, others had to request for a refresh for makeup after the rain, while all of them spent hours to get their makeup right and their hair all wrong for the part.

James Orlandia, the runner-turned-zombie who came in as the surgeon ghoul, said he had been “infected.”

“After the run in Laguna, I wanted a change in perspective and run as a zombie,” he said.

First-timers David Gonzaga and Kyla Rosales, who work as chefs but came in full army uniform, said they didn’t know what to expect at every turn.

“We know we can’t fight back, but we came prepared,” said David, who came armed with rifle toy guns instead of their usual weapons of choice, the knives.

But the runners were not alone in not knowing to expect until race night itself.

“That’s why we had a training day for the zombies on how to chase, run, dodge and even defend themselves in the apocalyptic scenario,” said Alex Aquino, who hosted the zombies at the “transformation center” in F1 hotel.

Even actress Rhian Ramos, who came to cheer and orient the runners, wished she joined the running undead instead.

“I’d probably dress up as a rock star zombie. Plus, I love doing my own make-up, it would have been nice to chase people,” Rhian said.

Other celebrity runners joined just in time for the last wave when midnight struck.

“I’m glad they brought it here to Manila, in the city, in the urban atmosphere, where the true zombies exist,” said host and model Rovilson Fernandez.

Originally, Rovilson and running buddy Will Devaughn signed up as zombies but decided to run with the rest of mankind.

“We took the antidote and we’re fine,” Rovilson said.

“In my case, I changed my mind. I wanted to see how fast I could outrun them,” Will said.