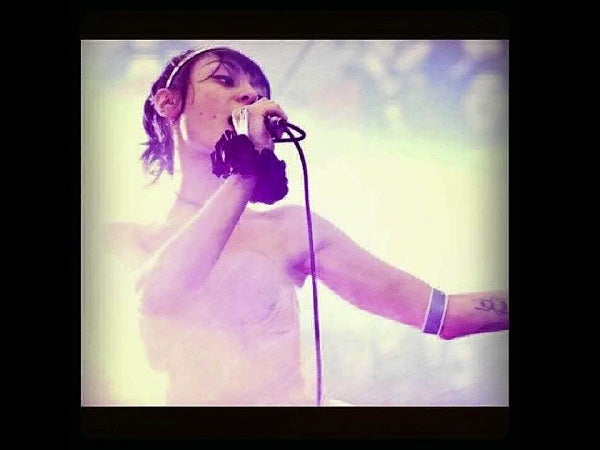 There are some people who can just do it all. There are those who have copious amounts of talent that can be, and indeed, need to be, shared with the world.

She has transformed herself from a University of Santo Tomas art student, to a tour de force of avant-garde talent, shown mostly in her tattooing at her own tattoo studio in Saguijo, called Snow Tattoo.

She is a model, a tattoo artist, the vocalist and one-half of the industrial electro-punk band Turbo Goth, but at her core, she is a visual artist.

She loves lines, surrealism and the art of cross-hatching (which means using lines of drawings at an angle to create depth and shadow).

Now part of the wonderful new collective The Pocket Universe, she belongs to a group of underground artists and young entrepreneurs making their own products based on their art.

I recently caught up with the very, very busy girl, and one thing I noticed was how soft-spoken she is.  She then proceeds to tell me that she is not only continuing the tattooing and gigs and whatnot, but she has found time to mount an art exhibit.

Her newest offering, which will be shown at the Crucible Gallery, is entitled “CONDEMNANT QUOD NON INTELLEGUNT,” or in English, “they condemn what they do not understand.”

This, I am told, is an exhibit unlike some of her past ones, as it deals with reimagined religious icons, using her interpretation of Christian iconography to showcase 12 pieces.

Why the title? Simply because Latin was the most widely used language of the Catholic Church before. The words themselves explain her inspirations and her own thoughts about art in general.

“I want to express my own experience of creating art from inspiration, and from the opportunity to execute and share it with progressive viewers.”

Obviously this is another notch in the growing maturity of her art. From when she started a few years ago to this exhibit, things have changed in life that have obviously played a  part in her art.  But where does she see it going from there?  Though she knows that her art will evolve, she also asks, “Into what? The possibilities are endless. Like most artists, I want my art to be shared, and to travel. I want my art to be seen by people everywhere.”

Ah. World domination. I get it. Can’t the music she’s making also influence the art she is doing and vice versa?  “Music and art are intertwined,” she says. “I listen to music when I paint or draw and when I tattoo. I listen to music all the time. It helps my mood, alters my feelings, and of course affects the way I lash my lines.

“When the iPod is on shuffle and one of Turbo Goth’s songs plays, I remember myself performing on a giant stage, and the feeling that I get from it inspires me to do a little extra well in what I’m creating at the moment.”

And before she rushes off to another gig/appointment/shoot/whatever, I ask, where does she think she’s going as an artist? How does she think she’s growing in that field?  “As an artist I always want to progress and develop and make myself better. You are only as good as your last work, so I always strive to make each creation better. I continue to challenge  and surprise myself. I try my best to make work that is meaningful not only to myself, but so more people can appreciate it as well.

“Depending on the theme for the exhibit, I feel like I am ready to take my work outwards, affecting a broader range of people and becoming relevant to society and culture. Not solely focusing on expressing my feelings alone, but my feelings toward the outside world.”

Well, that’s a mouthful, and ambitious. But in a good way, and the way we should all go, I suppose.  Is there anything about her, apart from being this little container of such immense talent, that makes her special?  “Well, also, I am weird.”