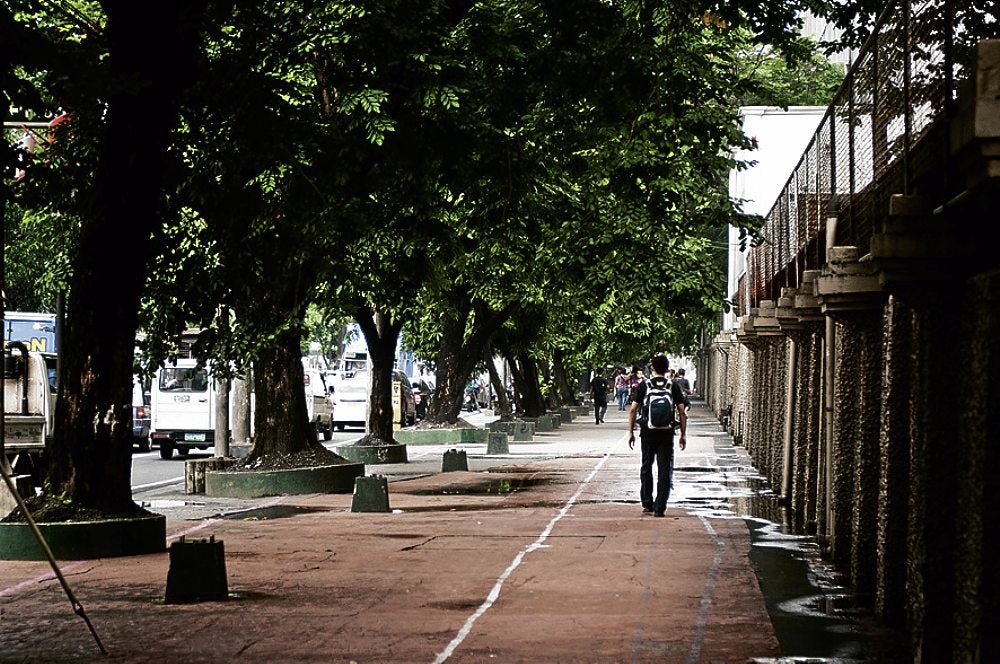 THE DEPARTMENT of Environment and Natural Resources has given the permit to topple down these trees on Lacson Avenue, Sampaloc. The sidewalk beside the University of Santo Tomas will be narrowed for road expansion to pave way for a multimillion flyover.

Lacson-España flyover takes off despite protests

Another flyover is preparing to soar in one of Manila’s most populous districts.

The Department of Public Works and Highways (DPWH) announced plans to construct the flyover on Lacson Avenue, eventually to be followed by a Metro Rail Transit (MRT) line on España Boulevard.

The Varsitarian, official student paper of UST, quotes government officials in a report as justifying the project to “alleviate traffic congestion at this major intersection.”

To alleviate traffic, whether vehicular or human, is an absolute necessity in Sampaloc and in the rest of the city as well. But is a flyover the answer?

The Varsitarian says, the DPWH has argued that, from “studies we made, we found out that the level of service has already plunged to the F level,” referring to the worst condition for traffic.

The flyover construction has been preceded by a road-widening project that will eat into Lacson’s sidewalks, displace pedestrians many of whom are students, and cut down trees.

The Varsitarian says the Department of Environment and Natural Resources has allowed “trees which have a measurement of 30 cm or more to be cut down” for the road widening and the flyover construction.

A traffic-impact assessment is being prepared to justify the flyover project.

There are many ways to reduce traffic. An integrated master plan that looks at design technology together with transit development is normally done for an overview on solving traffic problems.

Other methods include coordinated traffic lights to allow smooth flow, and—this is a more far-fetched but overdue solution—the reeducation of Filipino drivers.

Even simply controlling the crush of jeepneys at loading points (jeepneys have made the corner of Lacson and España their terminal, apparently with the blessing of City Hall or the MMDA); strictly controlling parking and imposing the provision of off-street parking facilities by all new constructions; clearing sidewalks from obstructions and illegal hawkers; and other relatively simple “housekeeping” measures will alleviate traffic.

These methods are hardly carried out on Lacson-España and elsewhere. When the traffic mess piles up, the DPWH and MMDA and the rest of government get an excuse to construct multimillion flyovers. (The Sampaloc flyover is estimated to cost over P900 million.)

However, none of the studies by the DPWH takes into account the software aspect. Has the impact of this project with respect to zoning laws and to visual congestion of the area been studied?

Despite being a highway project, it’s not just a road job. It has strong social implications that maybe the road people don’t see.

The proposed flyover impacts on the local community which has to live with the wages of flyover long after DPWH completes its construction. It will, actually, change people’s lives. It may have the same impact as the LRT on Rizal Avenue, which has caused the death of business and street life.

“So many flyovers detach, distort and scar the city,” professor Rizalito Mendoza of the UST College of Architecture is quoted by the Varsitarian as saying. “The flyover’s autocentric design dehumanizes the city, separating the people because of its focus on vehicular rather than pedestrian mobility.”

(The Varsitarian, in its July 7 editorial, “Down with the Lacson Flyover,” has protested the constructions. Visit www.varsitarian.net.)

Urban neighborhoods have been sliced in two by flyovers, dividing what once was a homogenous population and cutting off contact, which abets urban decay and blight.

Is flyover “progress”? Are we looking at outdated development models? The Los Angeles model, vehicle-friendly but people-unfriendly, divides neighborhoods, isolates sections of the city from each other, destroys the human activity of simply walking, has been proven to be harmful to community life.

To restore community life, some American cities have gone to the extreme. Flyovers and elevated highways are being taken down at great cost and replaced with open green areas.

Urban quality of life is what cities are recapturing. We want to live in comfortable cities that we can be proud of.

Heritage is, of course, an important part of the urban quality of life and forms the identity of a city.

With a national-heritage declaration come sanctions to development taking place around the heritage site.

A flyover trivializes the historic and cultural significance of the UST campus. Sight lines to the heritage site must be maintained. UST must not go the way of the campus of De La Salle University on Taft Avenue that was forever ruined by the elevated tracks that run across its entire length.

Progress? At what cost? It is time to rethink our image of progress.

The pressures on the fragile quality of Manila life are increasing at an alarming rate.  Alarms should ring loud before another flyover accelerates the city’s degradation rate.

Comments and feedback are invited at [email protected]