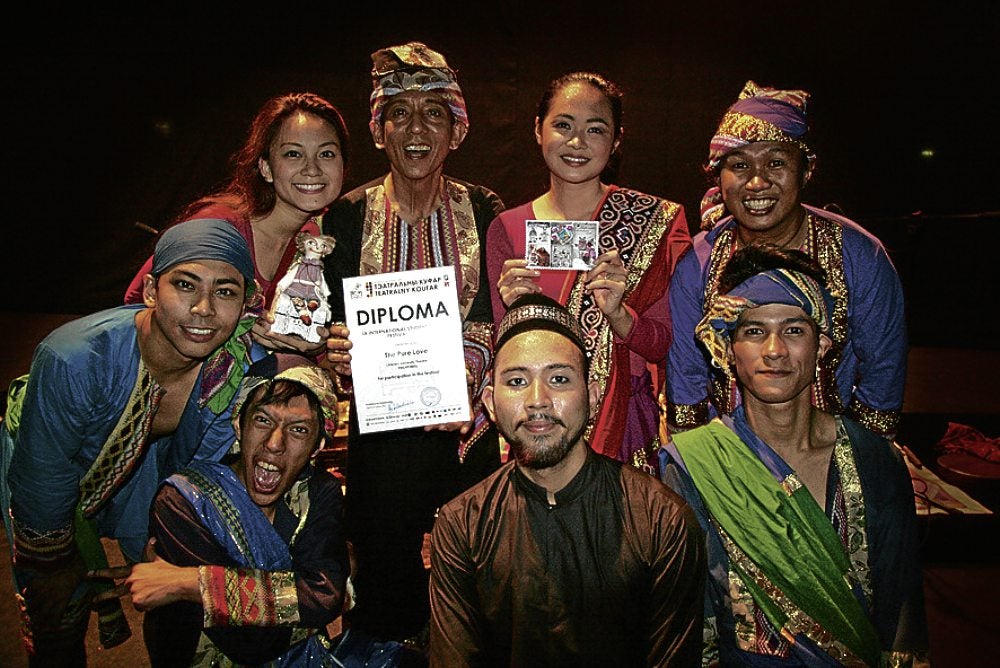 THE CAST with their diploma of participation. Kalil Almonte, Dan Liamco, Brian Sy, Joe-Nel Garcia. Back: Natasha Tañada, Ricky Abad (who doubles as a musician), Jacinda Lopez and Jayson Gildore.

In Faraway Minsk, capital city of Belarus, once part of the unlamented Soviet Union,  director Ricardo Abad was beside himself with excitement.

And he texted friends back home: “Show just finished. Whole house standing ovation for  ‘Sintang Dalisay’ at the Trade Union Palace. Success…! Thank you for your support.”

The reference was to the musical play Abad had just directed, “Sintang Dalisay” (Pure Love), an awit or metrical romance (“like the best of ‘Florante at Laura’”) which has four lines per stanza with each line having 12 syllables.

With text in Tagalog by National Artist Rolando Tinio, “Sintang Dalisay” is an adaptation of Shakespeare’s “Romeo and Juliet” in a Philippine setting. Abad further transported it into an imaginary Muslim country, fittingly it turned out, for Belarus is a Muslim state.

Thus, the Capulets of Shakespeare and the Capuletos of Tinio become Kalimuddin in Abad’s version; and the Montagues (Montescos in the Tinio translation) become Mustapha in the new reworking of the beloved classic.

“These are Badjao names,” says Abad.

Juliet is now Jamila (played by Natasha Tañada) and Romeo is Rashaddin (Kalil Almonte). And Friar Laurence becomes an imam!

“It is basically a love poem,” says the director. “We fashioned out a new script. The lines are very different. Rashaddin and Jamila keep talking about their love and problems. In the balcony scene, Rashaddin just gazes longingly at the balcony. But I needed Shakespeare to get a narrative structure. So there are fights, the parents… we cut some characters, like the nurse. But the plot is basically Romeo and Juliet.”

The cast numbered only five, with three actors and two actresses playing a multiplicity of roles.

Music was by Edru Abraham’s Kontra-Gapi, with the director himself (Abad) beating the drum and playing the tambourine. The indigenous sounds went over big with the audience, which represented 32 nations.

The props were right there on the stage, and the performers changed costume in front of everybody.

The Philippine production emerged the second favorite, after Lithuania, and besting France.

“There was high esteem for the show,” Abad says. “And this reflects on the country. They were amazed how we fused music and dance with Shakespeare and modern staging. Many of the productions did not do that.

“There was a lot of buzz about us even before the performance.  Ni-nerbiyos kami [we became nervous]. Mataas ang [high] expectations.”

There were invitations to bring the show to Lithuania, Serbia, Belgium, Canada, Mexico and Edinburgh, Scotland.

And the Russians and Koreans wanted to collaborate with the company on research and performance.

Tanghalang Ateneo will restage “Sintang Dalisay” for its 34th season, until Aug. 19, at the Rizal Mini-Theater, Ateneo de Manila University, Quezon City. Performances are at 7 p.m., Wednesday-Saturday; with 2:30 p.m. matinees for the first two Saturdays.