WHERE is that Tiger Mom when you need her most?

I am waiting for my doctor in this medical center, wishing I could channel controversial Tiger Mother Amy Chua and unleash her on these two 5-year-old boys who at the moment are playing a boisterous game of tag around our legs. As they turn the glass door handles into monkey bars and the sphygmomanometer’s rubber bulb into a machine gun, their mother shushes them ineffectually. “Stop now. C’mon, you’re bothering other people. Here, go read these books,” she offers. The boys take the books and use them instead to hit each other on the head while screaming with glee. The mother looks on helplessly. 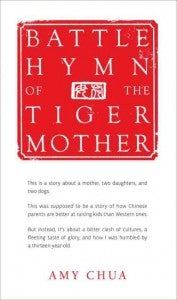 Amy Chua would never have stood for it. To my surprise, I could feel myself warming up to this author/law professor who, just months before, almost made it to Homeland Security’s terrorist list with the release of her memoir, “Battle Hymn of the Tiger Mother.” Now she’s been named one of Time Magazine’s 100 Most Influential People for raising provocative questions on the parenting style of most Americans whom she has described in her book as over-indulgent and bound to raise “soft, entitled children.”

Just what is a Tiger Mom and why are some people so anxious to turn her into an extinct species?

People might call it extreme parenting, but Chua describes it as the Chinese style of raising children which, she claims, is vastly superior to Western parenting with its stress on creative freedom, individuality and fun. Citing herself as an example, Chua says that a Chinese mother on the other hand believes that:

Schoolwork always comes first
An A-minus is a bad grade
Your children must be two years ahead of their classmates in math
You must never compliment your children in public
If your child ever disagrees with a teacher or coach, you must always take the side of the teacher or coach
The only activities you should allow your children are those where they can eventually win a medal, and
That medal must be gold.

Western parents, Chua says unequivocally, worry more about their children’s self-esteem and psyche rather than performance. Chinese parents meanwhile assume strength, not fragility, in their children’s character, and are therefore not afraid to criticize them for doing mediocre work. Childhood, the author says to justify her drill sergeant ways, is a training period for Real Life so it must be crammed with discipline, hard work and activities that will teach children useful skills which could open doors for them in the future.

Clearly, like most parents, Chua wants only the best for her two girls, Sophia and Lulu. But the road to hell, it’s been said, is paved with good intentions, and it is no exaggeration that this was exactly what her girls trod during their training years. Frankly Machiavellian, the author even declares proudly: “I fetishize difficulty and accomplishment.”

That she does, and with little or no compunction. Flouting conventional wisdom, she openly compares her two daughters, despite warnings that she could be stoking sibling rivalry in them and damaging them psychologically. She also imposes extended music practice hours even when the family’s on holiday, driving even meek and obedient Sophia to gnaw her piano and leave tell-tale teeth marks on the polished wood. Chua even threatens to burn the girl’s stuffed toys if her elder daughter doesn’t play a piece perfectly. When Sophia and Lulu make her birthday cards that she thinks are below-par, she throws these at their faces and demands that they make better versions. Why, the woman is so obsessed with achievement she even reads up on dog training and enrolls their pet in a Doggy Kindergarten to make it smarter than their neighbor’s mutt! It’s a wonder that Child Welfare Services – and the RSPCA – have not come a-calling.

Admittedly, her daughters excel in school and in music, with Sophia being invited to play at the Carnegie Hall when she was only 14 and Lulu winning a statewide violin prodigy award. This, she says, are proof that Chinese parenting works.

Not if you ask her younger daughter Lulu, though. The girl has declared open war on her mother and describes her as a “controlling freak” who thinks “everything is all about her,” and how successful she is at parenting.

Chua takes the rebuff stoically, declaring that parenting is a thankless job and one must be prepared to be hated by someone one loves while doing it. At the same time, she is seized with doubts about whether the uphill battle – and the gold medals – are worth all the recriminations, the shouting matches and the loss of authority over one’s child.

In the end, the author grudgingly acknowledges that perhaps hybrid parenting works better. Get the best of both worlds and run with it. “Chinese until the child is 18 to develop confidence and the value of excellence, then the Western way after that. Every individual has to find their own path,” she advises sagely.

Indeed, while one may hate the woman’s know-it-all and unyielding ways and her Gestapo tactics in raising her children, her memoir’s honest appraisal of the high price of no-fail parenting proves to be her redemption. Her premises – biased, racist and politically-incorrect though some of them may be – raised enough hackles to focus attention once more on parenting styles and priorities. The Western concept of choice versus the Chinese version of tough love?

It’s really an age-old dilemma that most parents – mothers especially – grapple with everytime the little ones want something that could rot their teeth, mash their brains or make them the next Paris Hilton. Do we argue, hold our ground and risk alienating their affection? Or do we give in and restore peace in the household? Are we spoiling them for life by making their childhood fun, or are we raising mean little Scrooges by withholding love unless they give something back – like a perfect score in that Math test? Do we spank, or do we coo and cuddle and hope they learn from our example?

How much TV and Internet, when to give them mobile phones, how much allowance, when should they start dating, is that dress too short, etc. So many issues, so many options. Will a single error in judgment scar our kids for life?

Not even Dr. Spock, Dr. Honey Carandang – or Amy Chua – would have all the answers all the time. Often enough, we parents have to figure out our options, play it by ear and decide based on circumstances, the children’s individual personalities, even budget constraints and timing. Fortunately, despite our ambivalence, children are usually resilient enough to survive our mistakes and often love us back despite our excesses. Well, Amy Chua’s children do, and she’s not exactly a pussy cat. •