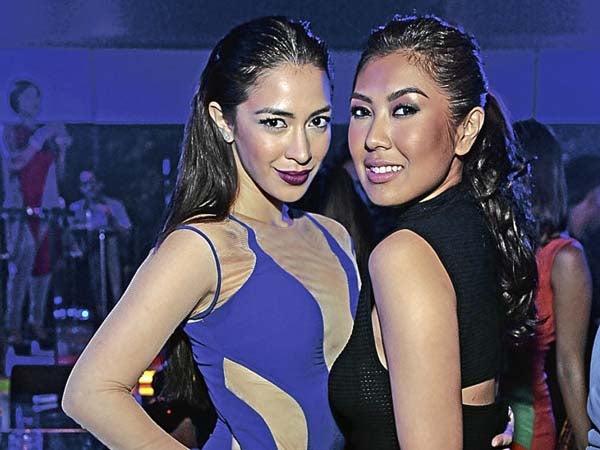 A totally enjoyable Brit-themed cocktail reception was hosted by the Philippine Tatler to launch its June British issue with Queen Elizabeth on the cover, honoring her diamond jubilee.

We were given royal masks, and had a blast being photographed posing on the royal throne wearing the crown.

Most popular masks were those of Duchess Kate and Prince William, naturally, dahlings.

Everyone enjoyed the British-inspired nibbles prepared by Mandarin Oriental Manila’s Martini Bar, especially the super fish and chips, which moi had four servings of. Yummy.

Because British Ambassador Stephen Lillie had to be back in London for the diamond jubilee celebrations, chargé d’affaires Trevor Lewis and wife Claire led the British contingent, which included Derek and Merete Page, Lynn Ayers Plata and Colin Glen.

Philippine Tatler editor in chief Anton San Diego welcomed the guests. “Thank you all for being here and to enjoy one of our favorite issues to date,” he said.

Traffic-stopper Tessa Valdes was dressed in a union jack outfit, DJ-model Callum David aka “DJ Vinimal” got on the deck and played tunes to keep the house rocking and rolling.

Everyone had a jolly good time. Expect a repeat when Tatler marks its 11th anniversary this September, dahlings.

Friends toasted Sylvia Reynoso-Gala, top chef and culinary teacher, who just turned a year younger. The exact number remains a secret. “After all it’s only a number, Maurice, di bala?” she told moi with a smile.

Energetic and tireless palangga of mine, Marieliese Evaristo brewed up the fun dinner at Balducci Restaurant in Serendra, complete with music by the singing troubadours of the resto.

Marieliese also asked invitees for song requests and Basil Valdez’s “Ngayon at Kailanman” was the pick of Maurita Arce who stood up to sing it while Marieliese translated it into English, leaving everyone in stitches.

Visiting from Spain was proud abuela Georgina Padilla, who drew out photos of her nietos for everyone to marvel at, natch!

Hostess Marieliese then reminded everyone, “Let’s make time for our friends while we still can. They are [among] the blessings in life we should treasure dearly and never forget.”  Amen to that, dahling.

In connection with the London Olympics, the happening took on the athletic chic theme, palanggas.

Preview editor in chief Pauline Suaco-Juan said the theme also mirrored “what is happening in the international runway. Sportswear is the biggest trend because of the Olympics.”

Hosted by Karen Pamintuan, the ball got on a roll with Pauline giving a toast to the 10 best dressed:

For your daily dose of fashion, dahlings, visit www.StyleBible.ph, and follow preview

Nuvo on Greenbelt 2 is under new management and clients keep coming back because of its great bands every night, dahlings.

This is thanks to brilliant Philip Cruz, the new owner, and GM Trecks Garcia.

Check out Nuvo on Thursday, Aug. 9, palanggas, when the Eye Candies group performs.