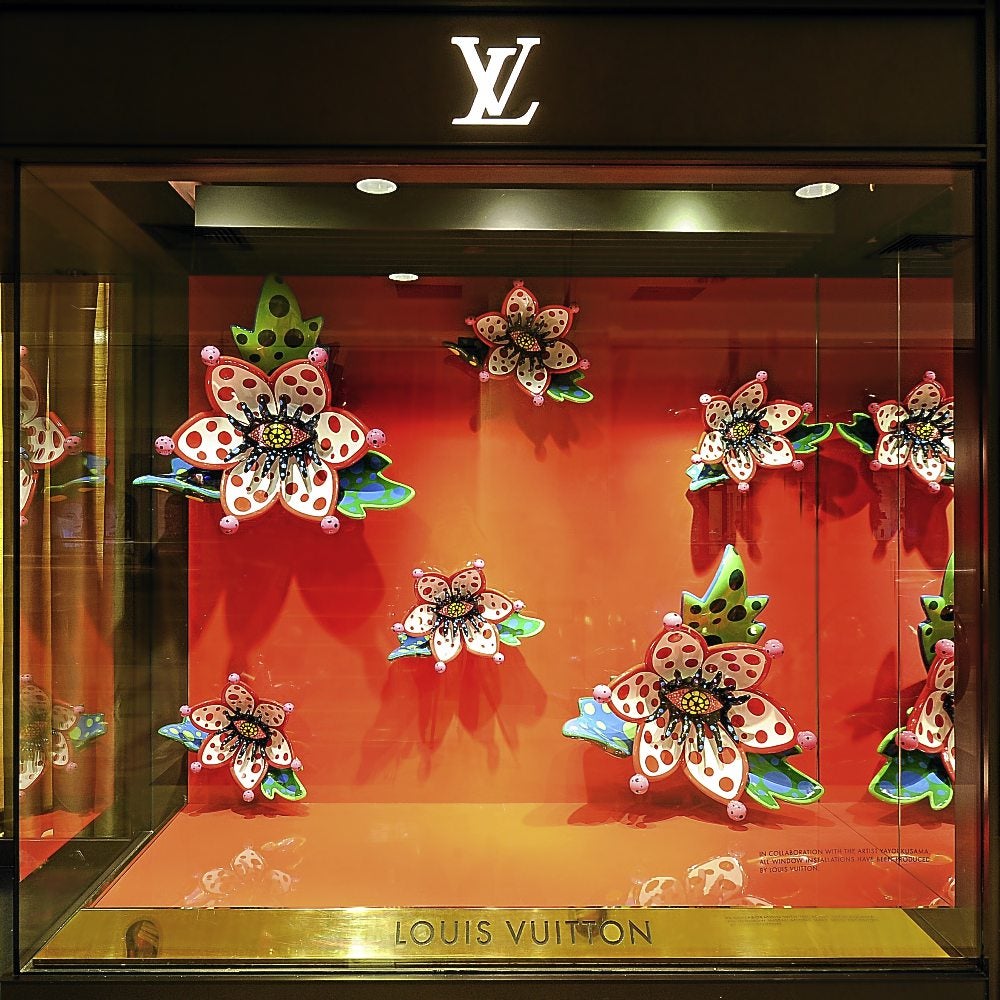 Since its creation in 1854, Louis Vuitton has maintained a close relation with the world of art. Through Marc Jacobs’ artistic direction, the luxury brand associates itself with the first exhibition dedicated to the Japanese artist Yayoi Kusama.

The exhibition has  traveled from Museo Nacional Centro de Arte Reina Sofia in Madrid to Centre Pompidou in Paris and, recently, to the Tate Modern in London and Whitney Museum in New York City. It pays tribute to Yayoi Kusama’s contemporary artworks.

“The obsessive character and the innocence of her artwork touched me,” said Marc Jacobs. “She succeeds in sharing her vision of the world to us.”

Kusama’s artworks originated from her hallucination, which took place in a dining room: The red flower patterns on the tablecloth started to spread across the walls, the floor, and on herself.

To transcribe this disorientation, she seized all techniques: painting, sculpting, photography, filmmaking and writing.

In 1958, she exhibited alongside Claes Oldenburg, Andy Warhol and Donald Judd.

By the late 1980s, she had showcased exhibitions at the Venice Biennale, the Museum of Modern Art in New York and Maison de la Culture du Japon in Paris.

Since her return to Japan in 1973, the artist, who describes herself as “obsessive,” has stayed in a psychiatric hospital and goes to her studio  every day.

Kusama has played a decisive role in contemporary art. Louis Vuitton celebrates this with a special edition of the new monograph published by Rizzoli New York. It examines her career and creative process, and includes unpublished documents, photographs from her archives and illustrations.

In a collection resulting from the collaboration between Yayoi Kusama and Marc Jacobs, Vuitton will interpret the most emblematic artworks of Kusama.

In eye-catching and various hues are the artist’s polka dots.

This hallucinatory proliferation is carried over to LV windows worldwide. On display are emblematic motifs: biomorphic-shaped “nerves” sculptures titled “Beginning of the Universe”; flowers titled “Eternal Blooming Flowers in My Mind”; and red polka dots on white background among which a Kusama figure named “Self-Obliteration” is seen.

For the artist who sees herself as a “dot lost among millions of other dots,” this collaboration allows her to spread her polka dots infinitely across the world and to convey her message of “love forever.”

These concept stores are ephemeral pop-up stores that feature original designs and are entirely dedicated to the special products created in collaboration with the artist.

By entering the stores decorated with large scales and vivid colors in the artist’s trademark red and white, guests can immerse themselves in the world of Kusama.

This new application invites users to take pictures and customize them with a choice of three creative effects reminiscent of Kusama’s works.

Social-sharing functions will also be available in the iPhone app, which allows users to share their creations in a personalized gallery, either through different social media platforms or on the dedicated mini-site: louisvuittonkusama.com, in the section titled “Visions of the Kusama world.”

“It enables her to increase her audience and that of contemporary art in general,” said Marc Jacobs, “the task Louis Vuitton has always set for itself.”