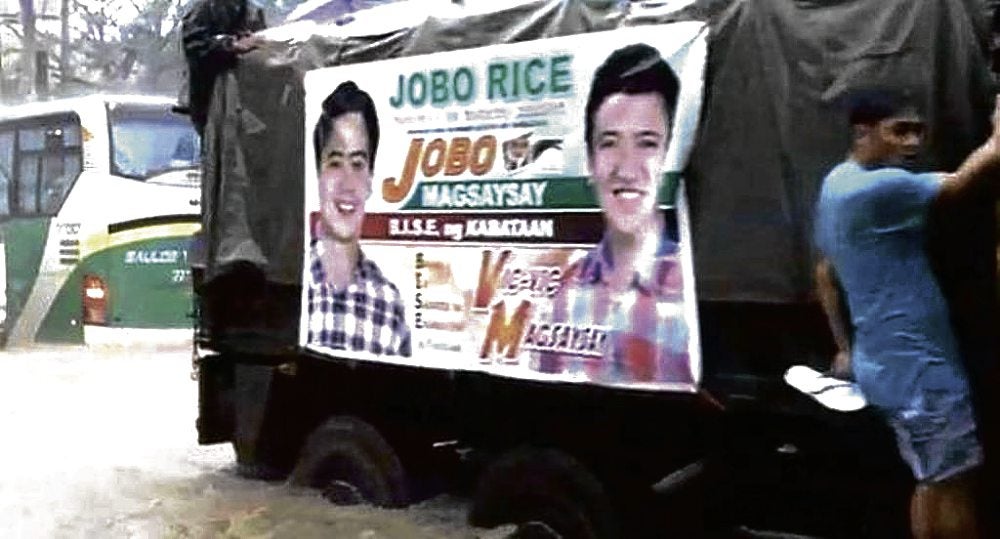 Calamity campaigning is so eeewww!

Thank goodness for Facebook, which has alerted people to every little irregularity, anomaly and failure in taste that publicity-hungry politicos are guilty of. Latest, very distasteful case in point: calamity campaigning.

Yes, some politicians were actually using the distribution of relief goods this week to promote themselves! How exquisitely epal is that?

Among the pictures that have been going viral are a truckful of “Jobo Rice,” distributed by Zambales congressional candidate Jobo Magsaysay. How’s that for starting early? He’s running for a seat for the 1st district of Zambales in 2013. And in case you want to get even more irritated, yes, he’s the son of Rep. Mitos Magsaysay—you know, the anti-RH Bill proponent who said “Heaven must be crying” over the support for the bill.

And then, there are the cans of sardines (yes, they actually printed their faces on the labels!) distributed by Masbate Gov. Rizalina Seachon-Lanete and Rep. Scott Davies S. Lanete of the third district of Masbate.

Listen: When people are desperate, wet, hungry and losing their homes because of floods caused by pollution, clogged sewers and garbage that was never collected because of the inefficiency of local government—really, do you think that’s a good time to remind them who’s in charge? Or to be more specific—who DIDN’T do their jobs?

Just saying. And that’s why we love FB.