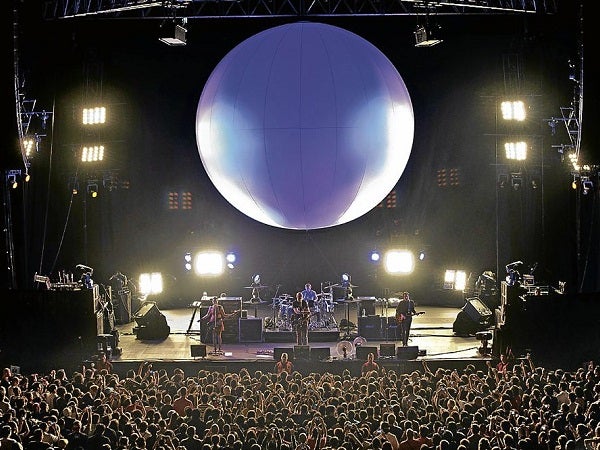 We were right to be apprehensive at the start. Looking at the sea of cautiously expectant faces, one could tell that thoughts of the ongoing calamity weighed heavily on everyone’s minds.

Frontman Billy Corgan’s thoughtful tweets on behalf of the band and the merciful change in date from August 7 to 8 offered some comfort, but we couldn’t help expecting the worst.

Some, like me, took advantage of the brief rainless periods and headed to Araneta early.

Others waded through shallow waters and navigated through relatively accessible roads just to get to the venue.

But even then, based on the woeful posts and complaints on cyberspace, a good number of fans were still unable to make it. (Tickets were nonrefundable since the show had not been cancelled.)

People showed up, so did the band. The show must go on.

What a show it turned out to be.

There are several compelling reasons the Manila leg of the American ‘90s alt-rock band’s tour is special.

One, they pulled off a successful show as a merciless monsoon hit the country’s capital.

Second, the band had stretched its set to nearly 30 songs over two hours which, if we’re not mistaken, is the longest Pumpkins concert in history.

Third, for this world tour, the band segregated its setlist into “new” and “old” songs, plus played an album—“Oceania”—in its entirety, which is largely unheard of as far as concerts go.

For the first half, the band played all 13 tracks from the new album while the audience looked on; whether they were lulled by the dreamlike melodies or mesmerized by the stunning globe-shaped backdrop, we couldn’t really tell.

But this arrangement was actually a smart move. It gave us an uninterrupted moment to soak up the Pumpkins’ new sound, which was completely alien yet oddly nostalgic.

From the hard, frantic beats of the opening songs “Quasar” and “Panopticon,” to the surprisingly optimistic synth sounds of “One Diamond, One Heart,” to the haunting melodies of the title track and keyboards-driven “Wildflower,” Corgan’s vocals were unmistakable and ageless. One fan commented, “Now I know why there’s no opening act, Billy just opened for himself!”

‘Blast from the past’ set

As if waking up from a trance, the crowd started getting all fired up when the Pumpkins’ cover of David Bowie’s “Space Oddity” ushered in the second wave.

This “blast from the past” set was a veritable, fist-pumping jukebox of Pumpkins hits that served as the soundtrack to our growing-up years.

They began with the sonic assault track “X.Y.U.” from the epic double-disc “Mellon Collie and the Infinite Sadness,” and soon enough, all cares and worries melted away in the frenzy.

The back-to-back sweeping anthems “Disarm” from “Siamese Dream” and “Tonite Reprise” segueing into “Tonight, Tonight,” plus a rare performance of the sweet love ballad “Luna,” left everyone breathless and teary-eyed with nostalgia.

We even caught the look of disbelief and delight on guitarist Jeff Schroeder’s face as the crowd lustily sang lines of everyone’s favorite moshpit track “Bullet With Butterfly Wings” back to them, loud and clear and a cappella. Yep, that’s the famous Pinoy sing-along power right there.

By then, Corgan had begun interacting with the crowd more. Apparently, the frontman’s jibes and flattery were meant only for the audience, but it made for entertaining banter with his bandmates nonetheless.

His cheeky spiel at wooing the ladies in the audience with “Soot and Stars” ended on a funny note when he commented that bassist Nicole Fiorentino, who looked like a vision in a red dress and badass guitar, was just as beautiful as the Filipinas… Only, she’s a bit smarter by virtue of her being a member of The Smashing Pumpkins. “This is when I get into trouble on YouTube,” he added wryly, amid a chorus of boos and bemused laughter.

Upon asking the crowd if there was anyone who was born in 1987 onwards, he was met with more boos and laughter.

Chuckling, he appeased the crowd by saying that all of us present were true Pumpkins’ fans, people logically old enough to have been there during the band’s inception. (It’s amusing to note that with that comment, Corgan effectively excluded his own drummer, Mike Byrne, who’s only 22!)

The current members certainly did more than hold up their own. They made both old and new songs their own, and Corgan actually looked comfortable playing up there with them.

As far as we Pinoy first-timers were concerned, it’s a good, solid lineup, one that hopefully puts the old issues with Corgan’s alleged creative tyranny to rest.

Little did everyone know, the real surprise was about to begin at the end of the set.

After playing the final song, the melancholy “Today,” the band came back to play a whopping seven-song encore as the band’s way of thanking those who were able to make it to the concert. From then on, the crowd was wild and unstoppable.

Setlist staples “Zero,” “Ava Adore,” “Cherub Rock,” and “Muzzle” were joined by all-time joyride favorites “1979” and “Stand Inside Your Love,” both of which weren’t in the original setlists.

The surreal set ended with a seminal cover of KISS’s “Black Diamond,” with the cherub-faced Byrne surprising us by belting out the part.

Dampened spirits notwithstanding, the concert put us on an indescribable high. We believe that no one could have gone home disappointed that night, even though reality set back in as soon as we stepped out of the Big Dome.

For the legion of loyal Pumpkinheads that night, it was well worth the time, effort and money, and maybe also the risk of catching the flu or leptospirosis from wading in floodwater.

Without a doubt, the thoughts and prayers of everyone present went out to the victims of the calamity. But at the same time, we were immensely thankful for being given this opportunity many had been waiting for for decades.

Thank you, Billy, Jeff, Mike and Nicole, for giving us the most “perfect” experience, all things considered. Hopefully, you’ll really be able to come back to Manila for the sake of those who weren’t able to make it.