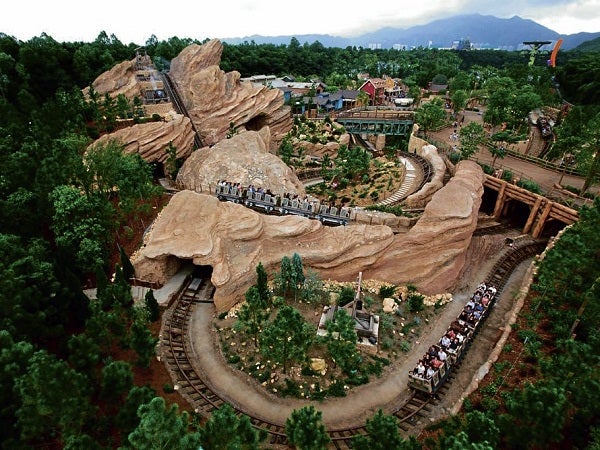 Even a typhoon couldn’t stop people from flocking to the “Happiest Place on Earth.”

Of course, Hong Kong Disneyland had to shut down operations and close the park once Typhoon “Vicente” (“Ferdie” in the Philippines’ area of responsibility) hit Signal 8 on July 23.

But as soon as the signal level was lowered to Signal 3 in the next two days, guests armed with Mickey Mouse raincoats and umbrellas wasted no time queuing outside the park’s ticket booths—our media group included.

Unmindful of the continuous drizzle and occasional downpour, we trooped to the park’s newest area—the Wild West-themed Grizzly Gulch, where guests must be prepared to get wet.

As the Grizzly Gulch story goes, the “town” was built on a dry creek bed and active geysers, so once in a while these geysers still erupt and spray jets of water into the air.

Kids can enjoy a friendly water fight using water bellows at the blacksmith’s shop and dry goods store. Or one could douse their friends (or parents) with buckets of water by leading them to the water tower and pulling the rope under it.

Grizzly Gulch, which opened July 14, is an attraction exclusive to HKDL. (A gulch is a deep valley that goes through a mountain.)

The “imagineers” behind this newly opened area also made an entirely new story about the origins of Grizzly Gulch. (Imagineering is the combination of imagination and engineering, or creative storytelling and technical know-how.)

The story goes: The town of Grizzly Gulch came about when gold was discovered in the rocks of Big Grizzly Mountain in 1888, with the help of the grizzly bears who had scratched their back against some of the boulders (helping reveal the gold). Soon after, people began to settle around the mountain, and the Big Grizzly Mountain Mining Company was established.

The town’s main landmark is Big Grizzly Mountain, named so because its peak looks like the head of a grizzly bear. It is also home to the Grizzly Bear family—Papa, Mama and their cub.

The highlight of any visit to Grizzly Gulch is a ride on the Big Grizzly Mountain Runaway Mine Cars. The roller-coaster runs through the whole attraction, and its forward launches, backward dips, and sharp turns are caused by the “mischief” of the grizzly bears inside the mines. And because it’s a semi-open ride, one gets an occasional spray of water from nearby geysers.

“We’ve combined elements in this ride, like the instantaneous drop backwards and the launch, that we’ve never done in other Disney rides,” said Ali Rubenstein, Grizzly Gulch creative director.

The whole area took around four years to complete, from story development to design and production. Rubenstein and her team of imagineers took inspiration from the landscape of the Sierra Nevada mountain range in northern California.

Rubenstein said it was a challenge to recreate such a Western environment. Sierra Nevada is also home to over 2,000 species of pine trees—HK has only two. “We had to make substitutions and replacements to recreate this kind of landscape.”

“We looked at the core of the Disney DNA, and part of it is a Western-theme land,” said Rubenstein, who has been with Disney Parks and Resorts for 14 years. “It’s rooted in the traditional Disney story of prosperity and luck.”

There was also the Rainy Day Parade, which brought around the park the Disney Princesses, Mickey, Minnie, Goofy, Woody and other characters in a train, to keep them safe and dry.

A short break from the downpour allowed us to watch in a small corner at Tomorrowland the Jammitors drum performers, who were dressed like the park’s cleaning crew. The duo used simple cleaning instruments—a tin pail, brushes, large plastic bins—to play some groovy beats which easily drew an audience.

Soon after, though, the rain started to fall again, which cut the performance short and dispersed the crowd of onlookers.

But, really, when you’re in Disneyland, a little rain can’t dampen your day.