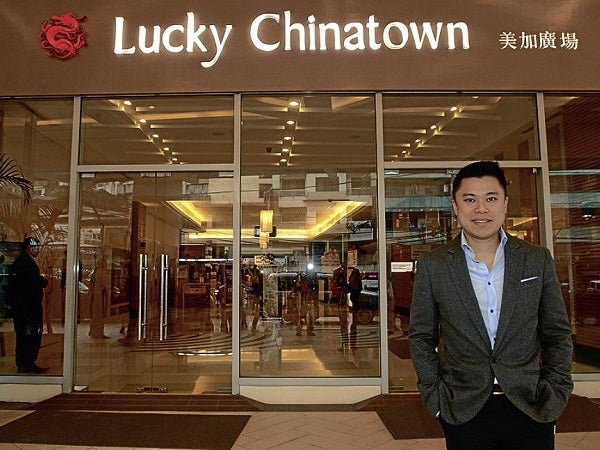 The plan was to build a huge bargain shopping place that would dwarf all the popular thrift, wholesale haunts in the neighborhood. Three years hence, and what rose on one whole block on Reina Regente Street in the heart of Binondo has indeed eclipsed every structure in its vicinity. But it wasn’t the discount behemoth originally planned that opened last February, but a posh, multilevel mall that this side of town had never seen before.

“We took a risk,” said Kevin Tan, first vice president and Commercial Division head of Megaworld Corp., the developer of Lucky Chinatown shopping mall. “Chinatown is a known bargain area, but midway we felt that we ought to do something different, one that’s never before seen in this area.”

The five-level Lucky Chinatown, interconnected by bridge walkways to Megaworld’s twin-tower residential condo, Cityplace, has a supermarket, four cinemas, a food court, an appliance center, a kids’ zone, a fashion zone, and a host of dining, service and retail shops previously seen only in upscale malls in Makati.

The mall will have its grand opening on Aug. 15, with President Aquino as guest of honor.

Next month, it will also unveil its so-called Chinatown Walk, a gentrified Chinatown alley, with tenants selling exotic Chinese delicacies and street foods seen in Hong Kong and Shanghai, Chinese gold, ceramics and unique services like herbal doctors and suppliers for Chinese ceremonies.

“That part of the plan was never changed,” Tan said on a recent tour of the mall. “In any country, one of the most popular tourist destinations is the Chinatown. We wanted to raise the level of our Chinatown and make it according to world standards. In the existing Chinatown, there’s no planning, there’s traffic [jam] and no place to park. It’s hard for pedestrians to get from one store to the next.”

Megaworld’s solution: To create a promenade it calls Chinatown Walk, and bring in tenants from Ongpin. “It has a lot of merit. It’s pedestrian-friendly, and we put 1,000 parking slots in the mall. The walkway is even covered,” Tan said.

Lucky Chinatown is also bringing in several institutions in Binondo into the mall, including Sincerity Restaurant, well-known for its fried chicken. Services that can’t be accommodated in the mall are located in Cityplace, like Gold’s Gym, which is set to open soon.

Tan’s father, real estate tycoon and Megaworld CEO Andrew Tan, always wanted to build something special for the Binondo of his childhood, according to Teresa Pesigan-Valentino, Megaworld’s AVP for marketing and business development.

The 3-hectare location of Lucky Chinatown is considered a heritage site where two public high schools, Rajah Sulayman and José Abad Santos, used to be. (When Megaworld acquired the property from the Manila city government in 2008, the developer relocated and built new structures for the two schools, also in Manila.)

Lucky Chinatown sits smack on two main thoroughfares: Reina Regente in front and Sta. Elena in the back, which leads to Divisoria. The popular bargain place, 168 Mall, is right behind it.

Building the structure was, however, easier than convincing potential tenants to sign up. There was understandably some resistance. Why build a high-end mall in a known bargain area where fakes and knockoffs abound?

“A lot of the tenants were afraid,” Tan said. “But we assured them that we’re targeting a separate market. These are not the ones who buy wholesale and sell the wares elsewhere or in the provinces. It’s for the moneyed Chinese, those who go to shop in Makati.”

Tenants, including Stores Specialists Inc. and Suyen Corp. (Bench Group), were pleasantly surprised at the response when they opened in February. Tan and his team were right.

“They see that there’s a market for their brands here,” said Tan. “The economics of this area is that they’re well-off and they don’t need to buy knockoffs.”

Security is tight in the mall, with metal detectors at entrances and CCTV systems in place. Ratio of guards per square area is high, according to Tan. “It’s a mall in the middle of Binondo; we attract all markets. Any mall will always have a mix of customers, and we welcome all markets. We have both a food court and upscale restaurants. Everyone must feel secure.”

RVP Architects designed the mall, but interiors, just like other Megaworld Lifestyle Malls, were done in-house. “I’m a frustrated architect,” Tan said, grinning. “So you can see my personal touches,” details that include recessed lighting, porcelain flooring and the like.

Though he believes in following certain auspicious dates (the grand launch on Aug. 15 is one, which is two days before the so-called “ghost month” begins), Tan isn’t superstitious. Not a lot of feng shui came into play in the design and zoning of the mall. “We knew the place is lucky. I follow the basics of feng shui, but the tenants also do their own. They bring their own geomancers, whether they’re Chinese or not. They said the entrances are positioned in very lucky directions.”

Apart from basic services like nail and hair salons, spas, and a barbershop, Lucky Chinatown also has a license renewal counter of the Land Transportation Office. One of its tenants is SM, which has a Toy Kingdom, Handyman and an Appliance Center. Metro Gaisano runs the supermarket. One cinema has 24 love seats.

Like other Megaworld malls, this one is pet-friendly, and has a pet-grooming station.

Signages are both in English and Chinese. Proof that you’re not in swanky Makati anymore, there are markers leading to pedicab and jeepney stands.

Megaworld’s type of branding is to make its malls distinct from one another, down to the names. (It also has Eastwood, Newport, Burgos Circle and McKinley Hills.) “We don’t want to be the kind of developer that just replicates,” Tan said. “That works for certain developers… We love to play with outdoor seating. We love to use indoor-outdoor areas. Every mall has its own story. Every location has to have its own identity, so the details have to be completely different.”

As for the naming of the Binondo mall, Tan explained: “A lot of people come to Chinatown to find luck, like charms, etc. This is supposed to be an auspicious location. It is for us, and for our retail clients as well.”