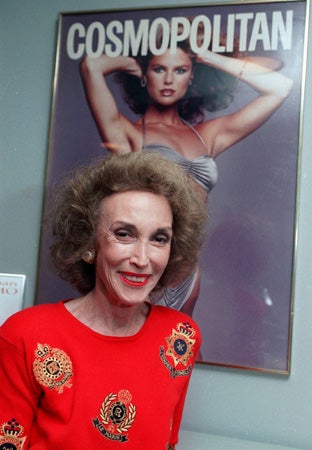 NEW YORK – Helen Gurley Brown, the saucy Cosmopolitan editor who delivered thousands of sex tips to single women and more than a few curious men, died Monday. She was 90.

“Widely heralded as a legend, Gurley Brown’s impact on popular culture and society reached around the globe, first with her 1962 bestseller, ‘Sex and the Single Girl,’ and then for the more than three decades she put her personal stamp on Cosmopolitan,” Hearst said.

“Under her reign, Cosmopolitan became the bible of ‘single girls’ worldwide and remains the magazine of ‘fun, fearless, females’ to this day.”

Cosmo, as the magazine often calls itself, stands apart from other women’s publications with its devotion to sex tip lists and perky relationship advice, in addition to the usual make-up discussions and fashion updates.

Gurley Brown took over the then conservative magazine in 1965 and set about delivering her message of “Good girls go to heaven, bad girls go everywhere.”

By the 1980s the magazine had grown to 300 pages, a third of that expensive advertising. It now appears in 35 languages across more than 100 countries.

In 2006, she explained the impact of her book “Sex and the Single Girl,” saying that it had changed the balance in the bedroom.

“Before I wrote my book, the thought was that sex was for men and women only caved in to please men,” she said. “But I wrote what I knew to be true – that sex is pleasurable for both women and men.”