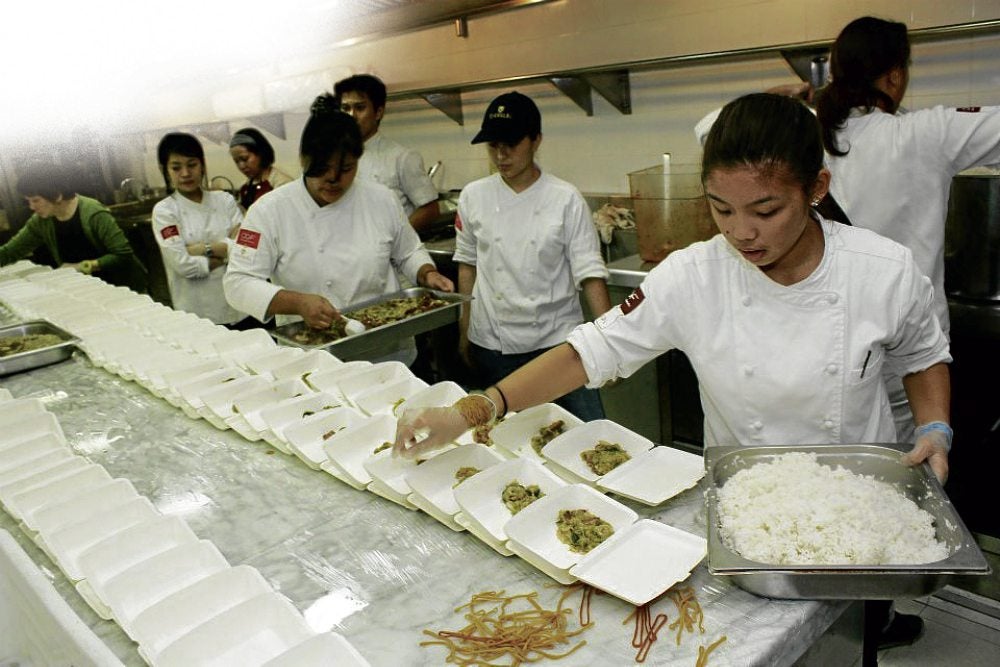 14,747 meals and 3,710 relief packages, mostly from youth volunteers–’bayanihan’ is alive

Last week’s floods, which left over 60 dead and some 384,000 people in evacuation centers, became our collective trauma.

But through the dark clouds shone the sun that came in the form of the bayanihan spirit that proved even stronger and swifter than in the time of Tropical Storm “Ondoy.” Relief operations surged everywhere, from the Red Cross to church communities and even school barkada.

One of the notable efforts came from Enderun Colleges in Bonifacio Global City with an internationally competitive culinary school.

You would think that students who can afford to pay P300,000 a semester to learn to cook would rather stay safely at home and enjoy the class suspensions. Instead, they were at the forefront of efforts to help the evacuees.

From Aug. 7 to 10, Enderun REACH (Relief Efforts and Charities), a student-led disaster-response initiative, had Enderun students coming to school to collect donations, cook and pack food, and distribute these to evacuation centers.

Using social media platforms such as Facebook and Twitter, the students were able to collect a considerable amount of canned goods, rice, clothing, bottled water and packing materials.

Best of all, the school’s kitchen facilities were used to prepare meals for flood victims.

Sang Hyun Lee, president of the Enderun Student Government, said on the last day of the relief efforts: “The relief operations for the victims of the heavy rains and floods have been the biggest one thus far, and we are grateful for everyone’s relentless support. We would like to extend our most sincere gratitude to all the sponsors, donors and volunteers who have given their support during these four days. We are overwhelmed with the output of this endeavor.”

Meals and relief goods for these operations were distributed through the help of the Philippine Army and Red Cross.

Enderun’s is no isolated story. Similar efforts were also undertaken in other campuses, churches, barangay halls, even in homes.

This was bayanihan in its truest form. But what was most heartwarming and inspiring was that the spirit was very much alive not only in those who were directly affected by the disaster, but also in those who could otherwise afford not to get involved. And it was especially touching to see this effort among the youth.

We can truly weather any storm, even if it comes without a name.