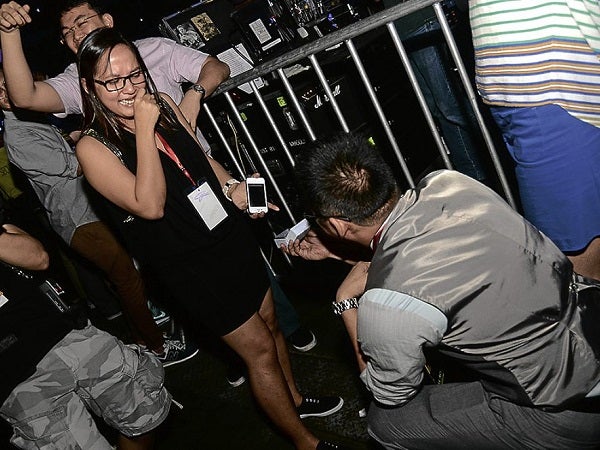 ‘Just say yes,’ sang Snow Patrol … and she did 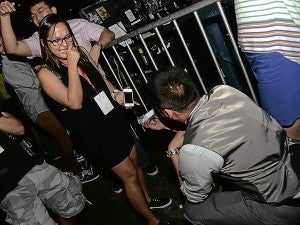 While everyone was getting all teary-eyed after Gary Lightbody’s “Life-ning” speech, another beautiful scene was unfolding at the left side of the stage. In-demand concert photographer Magic Liwanag had been sweating buckets for the last two months preparing for this night, and for good reason.

Out of all the concerts he’s covered, this one gave him the perfect opportunity to ask his girlfriend of three years, PR manager Jad Deveza, the biggest question of his life.

Because both Magic and Jad were part of the production team for Snow Patrol’s Manila tour, the setting couldn’t have been more convenient. Everyone was in on it: Their closest friends, the concert promoters, and even the artists themselves. Plus, with the help of events organizer Robert Blancaflor and jeweler Candy Dizon, he was also able to have the perfect engagement ring made in record time.

Sure, there were a few tiny obstacles he had to hurdle—or in this case, wade through. He’d braved the relentless downpour and thigh-deep floodwater to pick up the ring just the day before the event. Magic even had us pretend that there was an afterparty for the band to give Jad an excuse to dress up, but she ended up wearing sneakers anyway. But it was all worth it; in the end, she never saw it coming.

On the night of the concert, everything (and everyone) was in place, and it took supreme effort not to burst into nervous giggles. Once inside, we huddled next to the sound equipment on the left side of the stage and kept Jad distracted while Magic got his act together.

“Just Say Yes” was supposed to be the final encore song. Incidentally, it was also the Snow Patrol track closest to Jad’s heart. “This is my fave,” she said, misty-eyed, and turned to record the song on her phone. She was so engrossed to notice that we’d already started filming our own footage of her on our own gadgets.

We slowly inched away from her to give Magic space, and, just before the song broke into the chorus, he came out from backstage, smartly dressed and grinning nervously. He tapped her on the shoulder, said a simple “Hi,” and dropped on one knee.

He let the song do the rest.

In the deafening chaos, we could only watch Jad’s expression change from annoyance at being interrupted into utter confusion, before settling on complete shock. He slipped the ring on her finger and held her tight as she started to cry in earnest.

“Just say yes,” Gary crooned on the other side of the stage while the word “YES” flashed on the screen panels in big, white block letters. We waved frantically and screamed ourselves hoarse trying to catch the frontman’s attention. “Gary! She did! SHE JUST DID!!”

In the space of a heartbeat, the newly engaged couple was surrounded by shrieks and smiles and flashing camera bulbs. Even the band’s guitar techs stopped to give their hearty congratulations, complete with guitar picks as souvenirs.

We later found out that Magic didn’t even get to pop the question, and that Jad only said yes after he’d put the ring on her finger. But looking back, there are just no words for such a monumental gesture. Okay, maybe except for one.

For these two concertphiles, there’s really no better way to start the rest of their lives together.