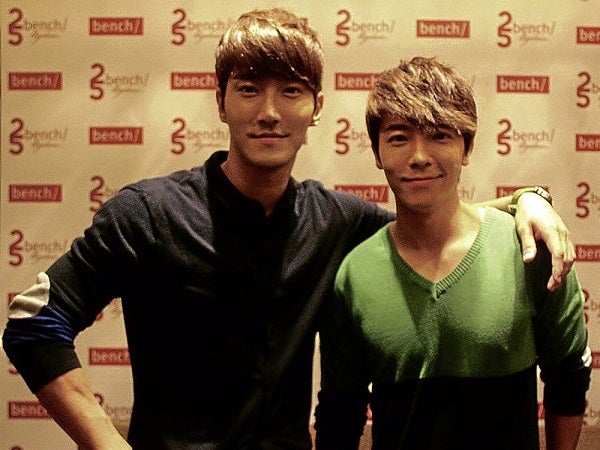 A Super date with ‘SiHae’

I don’t think I’d ever wished so hard for the ability to master a foreign language in five seconds flat. A few inches away from me, Super Junior hunk and newest Bench endorser Choi Siwon was holding my phone recorder close to his mouth, talking loudly in rapid-fire Korean while his handlers doubled over in laughter.

Beside him, fellow endorser/SuJu brother Lee Donghae looked as bemused as I was bewildered, his elfin features crinkled into a wry smile. I couldn’t tell if the giggling female interpreter was trying to tell me to stop recording, but the good-natured (if a little impish) grin on Siwon’s face told me he was just teasing.

Naturally, my closet fangirl’s heart skipped a beat. Or two. Language barrier notwithstanding, these boys were clearly having fun; admittedly, so was I. After all, what human female could resist the full force of their combined charm up close?

Super recently got to spend time with the two idols from the phenomenal K-pop supergroup in a short exclusive interview at The Peninsula Manila, right before their scheduled fan event for Bench at the Trinoma Activity Center. Having just arrived in rainy Manila the day before, the tall, good-looking pair (nicknamed “SiHae”) had been mobbed by hordes of ecstatic fans who’d followed them from Naia all the way to the hotel. This two-day trip marks Donghae’s third, and Siwon’s fourth, visit to the country.

Sporting preppy blue and green color-block outfits and identically sunny smiles, Siwon and Donghae were two bright spots in an otherwise gloomy afternoon. Siwon often cracked jokes and did most of the talking in Korean, occasionally slipping into English during outtakes. Meanwhile, Donghae stayed quiet and concentrated on perfecting the Filipino phrases on his cheat sheet.

“Maalako ayo,” Donghae intoned, then looked up at me for confirmation. “You mean ‘Mahal ko kayo?’” I offered, carefully enunciating each word as both boys followed suit. “Were you trying to say ‘I love you’ (for the fans)?” “Yes. High five!” He suddenly cheered in English, drawing laughter.

While here, they had also shot their second campaign for Bench’s new collection with renowned Los Angeles-based photographer Jiro Schneider. Siwon described the shoot as “very fun.” “Because this is the second time, it was very comfortable for us and for the photographer. We knew each other, what we wanted and what Bench needed,” he said.

When it comes to fashion, Siwon prefers to experiment with different styles that fit him. While he doesn’t really go for colorful pieces, he likes wearing clothes that are comfortable and casual, two qualities that both guys see in—and love about—Bench’s style. “Bench clothes feel very comfortable and the concept was also free … And we like to wear comfortable clothes, so we were very happy when were shooting yesterday.”

“I like the style I’m wearing right now; it looks very casual and modern,” Donghae added, gesturing at his blue, green and khaki ensemble. In fact, he even asked Bench to give them the clothes from the shoot so they can give it to the other Super Junior boys back home. Sweet.

Because of their tight schedules, not to mention the unpredictable weather, the boys spent what little time they had resting, for which they were immensely grateful. Donghae hopes to be able to travel around the Philippines on his next visit. “The next time I come to the Philippines, I want to stay at The Peninsula because I like the bed,” Siwon quipped with a laugh.

Of course, that “next visit” would largely depend on the fans, as implied in an earnest message from the two: “First of all, thank you to all the fans who wanted Super Junior to be Bench presenters. Also, don’t forget to give your love and support to Super Junior so we can work with Bench for a long time.”

After the fan event, the two flew back to South Korea with sweet parting tweets for their loyal Filipino followers: “Good bye !! Manila see u next time !!^^ I’ll be back soon !! Good night see u in dream !!” Donghae said, while Siwon tweeted, “thanks manila for all your love and passion. already miss you ;)”.

Oh, the feeling is definitely mutual.