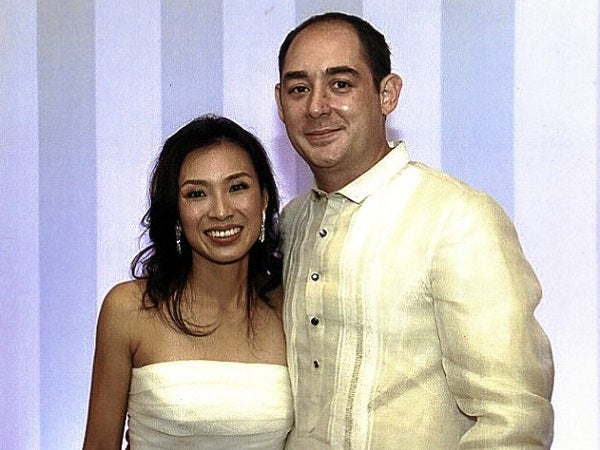 Cebu witnesses its most elegant wedding in years

Cebu’s most elegant wedding in years took place the afternoon of Aug. 11 at the Metropolitan Cathedral. It was filled with a well-dressed congregation, most of whom were relatives and close friends of the couple, Kaye Luym and Javier “Javi” Sala.

She is the lovely daughter of Kelly Luym and Elvira Gotauco Luym; he the son of José “Cheling” Sala, honorary consul of Sweden, and Susan Montenegro Sala. The wedding capped a romantic courtship of several years.

Kaye was picture-pretty as she made her way down the white orchid-bounded aisle on the arm of her father. She wore a gown by Rosa Clara of starkly simple lines. A jeweled pin held her veil of the sheerest silk tulle.

People applauded their progress all the way to the altar. Main celebrant was Fr. Ernesto Javier, SJ, a close friend of both families, and that was evident in the warm homily he dedicated to the couple.

In chartreuse gowns were the two maids of honor, Kirsteen Lim and Cybill Gayatin, Kaye’s partner in their A-list PR enterprise. Their gowns, like those of the entourage, were by Arcy Gayatin, Cybill’s mom. There were also two best men—Javi’s brother Mikel Sala and close friend Tristan Aboitiz.

Attendants to the bridal couple during the nuptial rites were Raymund Basubas and Marelle Sala for the candle; Miguel Osmeña and Rowena Lim, the veil; Petrius Dakay and Jen Wladichuk, the cord.

Marielle Montenegro was lector during the Mass with Manny Fernan in charge of the first reading; Rachelle Luym, the responsorial psalm; Alfonso Montenegro, the second reading; and Bunny Luym-Alcordo, the prayers of the faithful.

In the offertory procession were May Lim and Leslie Alajas with the fruits; James Montenegro and Sandro Aboitiz, the hosts and wine; father of the groom Cheling Sala and mother of the bride Elvira Luym, the chalice and ciborium.

The Mass and wedding rites were solemn and emotion-packed. Beautiful music pervaded throughout. It was momentarily overpowered by the strong rain outside which was a blessing as it cooled the otherwise humid afternoon.

Everyone kept Susan Montenegro Sala, Javi’s mother, in their prayers. She was taken ill the day before and ordered confined at the hospital by her doctors. Her mother, Nena Montenegro de Montenegro, and aunt Rosebud Rivilla Sala, assured her they’d look into every detail. Dear friend Dr. Vivina Chiu Yrastorza had visited Susan shortly before the wedding.

The ceremonies, picture-taking and all had taken a little over an hour. Guests nimbly made it to their cars amid the drizzle, and headed to Radisson Blu Hotel for the celebration. Cocktails were at the lobby lounge. Upon arrival at the foyer, Kaye and Javi were greeted with enthusiastic applause.

Waiters served goblets of chilled white wine, or the top-rated Marques de Caceres red wine from Spain. It went perfect with other Spanish specialties such as Queso Manchego and the sliced Jamon Serrano, expertly carved by a most dedicated man.

For that matter, the Radisson provided excellent services, as everyone told general manager Lyle Lewis and his assistant, Zenaida Alcantara. There must have been 500 people at the cocktails, and later on at the Santamaria ballroom for the buffet dinner and program.

A little before 7 p.m., guests began to ascend the stairway, take the elevators, or step on the escalators. Cards with guests’ names indicated the tables designated to them.

There was no presidential table and that way sponsors could sit with their spouses and families. A long table in the center with crystal candelabra dripping sparkling prisms was for Kaye and Javi and their close friends and cousins. Everyone had to go to the buffet for food.

Roast beef was either rare or well done. Various versions of risotto were offered, and pasta, too. Hot dishes, among them coq au vin, were in another area. You could toss your own salad with a whole range of condiments. Best of all was the sashimi bar as well as the ice-filled bar overflowing with the juiciest, freshest oysters and prawns. Desserts? Name it, they had it.

Toasts were made to Javi and Kaye by Tristan Aboitiz who read from several pages, and Mikel Sala who was briefer. Kind words came from Kelly and Elvira Luym, as well as from Cheling Sala who was much-applauded for his little spiel in flawless Chinese.

Among the family was Ingrid Sala Santamaria, collecting praise for the fabulous classical music played during the cocktail hour. It was by the string ensemble of Sala Foundation’s Peace Philharmonic of the Philippines. “They will accompany me,” she said.

Ingrid was referring to the concert she will give in Cebu on Sept. 7, 8 p.m., at the ballroom of Marco Polo Plaza Hotel in celebration of her 50 years as  concert pianist. The program will include Chopin’s Piano Concerto No. 1 in E Minor. Tickets are available at Marco Polo, tel. 2531111 (ask for Hospitality Desk), or from the Arts Council of Cebu, tel. 2330452.