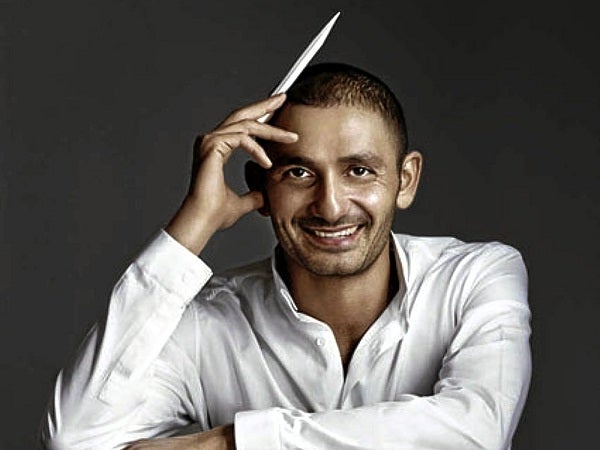 I’m not interested in fragrances per se,” says perfumer Francis Kurkdjian. “It’s simply a way for me to express myself.”

Ten years ago, Kurkdjian opened a house of bespoke fragrances, the first to do so. In 2003, he met his would-be business partner, Marc Chaya, who was ready to quit his job as a partner at the professional services firm Ernst & Young. Around them, a small team soon formed, and Maison Francis Kurkdjian officially opened in 2009.

Kurkdjian’s current creation, called “Amyris” (from the Greek word amyron, meaning “intensely fragrant”), is the most recent addition to the brand’s “couple scents.”

“The range is like creating a wardrobe,” says Kurkdjian. “You go from casual to evening to couture. And in my vision, what’s missing is a daily ready-to-wear type of perfume.”

“Amyris for women is basically a tribute to the modern woman, a woman on the go, just like my sister.”

In both versions—for women and men—the Amyris duo is a light and fresh scent, derived from amyris, a little tree from Jamaica, and iris, the subtlest of Florentine flowers.

“I dress men and women with my perfume, wrap them with my art and with my love.”

In the Philippines, the brand has found its home in the sleek yet charming bi-level boutique that is Adora.

The carefully curated merchandise and well-trained staff were factors that made Kurkdjian choose Adora.

“It’s very elegant and intimate, like a family and not a big corporation,” says Kurkdjian. “For luxury products, it’s very important to have that kind of relationship because they’re like jewels you have to take care of.”

Though he’s been in the perfume business for roughly 20 years already, Kurkdjian says that when it comes to the Maison, they want to take their time in establishing each fragrance.

From the perfume’s ingredients sourced from  the world over down to its gilded box, a Maison Francis Kurkdjian creation denotes luxury.

He adds, “I try to bring a touch of humanity to each perfume. For me, it’s not only a perfume but something that shakes your memory and brings you back to your personal feelings.”

When creating a scent, he considers two important factors: sillage (how a perfume leaves behind its scent) and signature to make the perfume stand out.

He also has a knack for developing unconventional ways by which others can experience his scents, such as “Agathe’s bubbles” and perfumed bracelets. Kurkdjian is not afraid to take risks and think outside the box.

“I think what’s important with the bubbles we created is that no matter who blows them, they have happiness in their eyes.”

He waits for the inspiration to come (usually about 18 months), then “Marc gives me an idea when I should be ready and how long I have to prepare.”

“You don’t really know when the inspiration will come and what’s going to come out of it, but what makes a difference is translating it into the real product,” says Kurkdjian.

He sees his life as having many doors, and notes that everything in life is also good timing.

“All of a sudden, one door opens more than another,” explains Kurkdjian. “You just push it and you feel like the world might be more exciting.”

With numerous well-known scents (at least 50 of them) and awards under his belt, he certainly has a lot to be thrilled about.

But for the Prix Francois Coty awardee (the equivalent of the Oscar among perfumers), what’s most memorable is the time his parents told him they were proud of him.