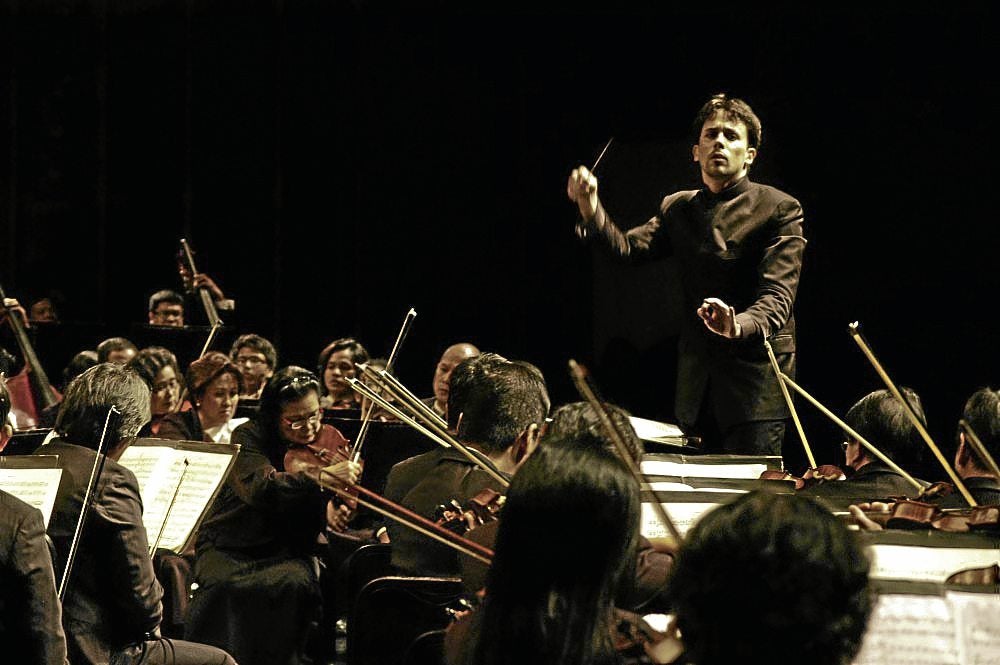 OLIVIER Ochanine with the PPO.

When conductor Olivier Ochanine opens the PPO season on Sept. 21 at Philam Life Theater, he shall be making music with a first-hand immersion in the monsoon rains that submerged Metro Manila last week.

If you didn’t know it yet, Ochanine and his wife Twinkle heeded the call to help in the rescue and relief operations for flood victims.

They waded through the murky flood water along Roosevelt and Araneta Avenues in Quezon City, and later volunteered in the relief operations  in Novaliches, Marikina and Pasig City.

It was his first glimpse of a flood of biblical proportions, and doing relief work was quite an awakening.

“It is one thing to see these things on TV and quite another to experience it live,” he said. “I will never quite understand the extent until I experience losses of this nature myself. I’ve been very lucky not to. Perhaps one of the reasons I do strive to travel to these areas (again, not as a disaster tourist but to be active) is that I think all of us who are lucky in not experiencing these things can become better people from learning from people’s tragedies. Simply watching TV is not the best way to do this.”

Why he did it—in spite of the dangers—is something he will never regret.

“It was not about seeing the flood victims first-hand as much as it was to see what I could do to help in any little way,” he added. “I’ve done fund-raising for victims of Typhoon Sendong before and went to Iligan to help on a mission. But this time I thought I would try my hand at a rescue mission, since I was told they needed extra volunteers. I had no illusion about the fact that I could not  do that much in one night, but I thought I would just see what it was that I could help with.  I just went ahead and did what I thought was right for the time being.”

The conductors said the last horrendous monsoon rains showed the best of the Filipino spirit. “What it showed me more was that Filipinos really banded together to help each other. We saw people carrying other people, some clearly strangers to one another. Naturally, you see this in any country that undergoes such calamities. Yet there is something here I cannot describe pertaining to the spirit with which Filipinos come to the rescue of others.”

One pointed out most of these flood victims would never get to set foot at CCP and hear those orchestral music in the season attractions. He said he knew the reality of how classical music figured in Third-World countries.

“While I know the realities, I will  never accept that music cannot be for everyone. Yes, it is a fact that most of these flood victims will never set foot at the CCP or hear an orchestra or piano or Rachelle Gerodias live. I will never resign to an attitude that classical music will always be an interest for the minority. I do have a belief that it can be made much more mainstream. ABS-CBN already has a very good program underway for that through the great interest of the Lopez family. I have plans for some projects in that respect, too, that will take music outside of the CCP also. A fact that cannot change is that the CCP is not for everyone, partially due to its distance from many Filipinos. Bringing music out to the countryside is the key.”

“I do not think classical music can do anything to change the economic structure of a society vis-à-vis the gap between rich and poor. I do think that the perceived notions of what classical music is can be changed over time through a very structured approach to programming.”

“This is our 40th anniversary, and I wanted to showcase the orchestra. These pieces are each quite unique from one another, and show the symphony orchestra’s ability to portray a massive array of different characters and to depict an endless palette of sound colors. I also chose some of the more unfamiliar works of these composers as part of my mission to ‘expand’ our listeners’ experience.”