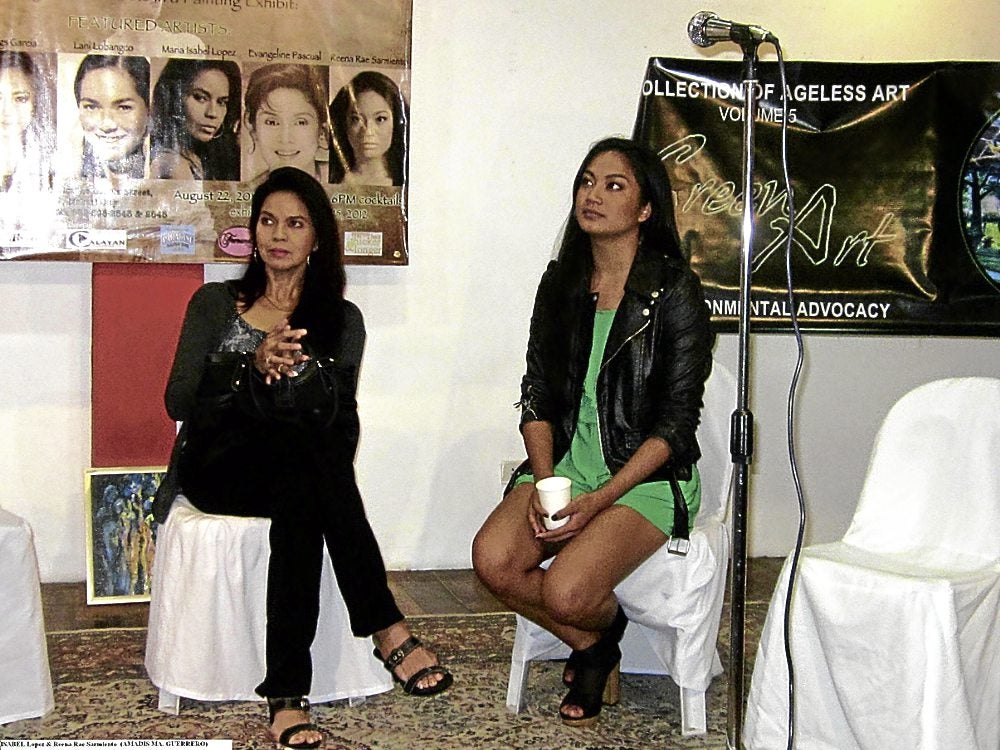 Six beauty queens—“partners in crown,” as one of them puts it—who are also visual artists are  participating in an exhibit titled “Art and Beauty”  II, being the second such show of its kind.

Proceeds will go to the We Govern Institute, an NGO which advocates empowerment (mostly  women’s) and good governance.

The all-women, all-pulchritude show will be launched at Rico Renzo Galleries &  Caffe on Aug. 22 (6 p.m.) on Nicanor Garcia (Reposo) Street, Bel Air 2, Makati City. It will run until Sept. 15.

This was announced at a recent press conference called by the National Commission for  Culture and the Arts (NCCA) at the LRI Business Plaza in Reposo, Makati. Two of the six artists  are Fine Arts graduates. All except Alagao were present during the press con.

The artists were asked all sorts of questions during the gathering, including militancy  (Gabriela is one of the partner agencies); what inspires them; how much do their works cost;  what medium do they use; and even reproductive health: One was for it, another against.

Some of the paintings were displayed during the press con.

Lopez, better known as an actress and a Fine Arts graduate of the University of the  Philippines, said she derived extra income from her paintings and “there can be no better combination than art and beauty.”

She said “money is not an issue” and she does not price her works too high so that many  will buy: P30,000 up.

Three of her paintings were displayed,  being studies of the female  figure.

“I have always been fascinated by the female body,” she observed. “To me that is empowerment.”

As for militancy, Lopez said “ever since militante ako. Palaban ako [I’m feisty] even  with or without [Gabriela].

She showed two of her paintings on laptop. The first depicted Filipinos crowded in a  jeepney and dreaming about  the American Dream. The second showed a devotee  fervently praying in Baclaran.

Garcia said painting was just a hobby (“I just love to draw”) and she derived inspiration  from her father, an engineer. Through art, she also learned to believe in women’s empowerment.

Sarmiento only started painting last year, when a friend taught her to mix colors properly.

And already she displayed two promising works: a study of colorful reef fishes; and sunset as  well as sunrise over a bridge.

And she just gives her paintings away.

Pascual, who is studying at the Loyola School of Theology, noted that having a  background in art was fine but one should also have passion. She felt strongly about Filipinos,  especially women, working and being exploited abroad: “They have to be empowered to come here.”

And Lopez concluded: “Art is a form of therapy, a form of self-expression. And you nurture others.”