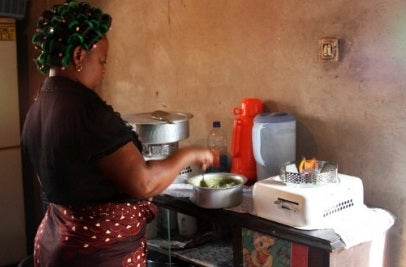 When cooking dinner is a matter of life and death

WASHINGTON – For millions of women around the world, cooking the family meal is a daily, dangerous chore. Sweating over smoky open stoves, they put their lives and their children at risk every day.

More than three billion people, or 40 percent of the planet’s population, still rely on open fires to cook, balancing a pot on top of some stones, under which burns a fire fueled by wood and coal, dung or left-over crops.

“Before we had just a dirt floor in one of the corners of the kitchen, where we would build a small fire, and we’d put a metal stand over it for the pots. There was so much smoke in the house all the time,” Maria Itzep Chiguil said.

“The children had a lot of problems with their eyes, and with their throats and congestion,” the 35-year-old mother of four told AFP, speaking by phone with the help of a translator, from her home in the Guatemalan highlands.

The World Health Organization estimates that reliance on solid fuels is one of the 10 most important threats to public health.

Some two million people die each year from the effects of smoke inhalation, mainly children under the age of five who fall prey to respiratory illness such as pneumonia.

Burns and injuries from falling pots and from clothes catching on fire are also a serious problem.

Collecting tonnes of firewood is also a laborious, time-consuming and hazardous process. In the Democratic Republic of the Congo for instance one woman is estimated to be raped every hour, many while out foraging for fuel.

Environmental damage is huge as forests are depleted and black carbon from inefficient fires counts for upwards of 25 percent of the carbon dioxide released into the atmosphere, while homes become coated in black grease.

Now a global alliance, set up under the auspices of the US State Department and the United Nations, is working towards a goal of supplying 100 million clean cookstoves by 2020.

Chiguil says her life and that of some 15 neighbors in her Guatemalan village of Patachaj was transformed a year ago when they received their new cinder-block fuel-efficient stoves.

With its four pot holders, she can now cook several things at once. “I used to spend all day cooking as I could only cook one thing at once,” she said. “Now I have more time for other things.”

“Half of the world is cooking this way and it’s kind of hard to believe we never thought this through before,” said Kris Balderston, whose office at the US State Department helped set up the Global Alliance for Clean Cookstoves.

US Secretary of State Hillary Clinton has become the most public face of the public-private partnership, and has so far cajoled some 36 countries to join either to implement clean cookstoves at home or become donors.

“This is one of the solvable problems that we face in the world today,” she has said.

The alliance brings together many partners: researchers to draw up standards on stoves, manufacturers to make them, governments to promote awareness, NGOs to help distribute them and financiers to help people afford them.

But executive director Radha Muthiah said one of the biggest hurdles was “the lack of a consistent set of agreed-upon global standards – health standards, safety standards, emissions standards and efficiency standards.”

Launched in September 2010, the alliance has developed a strategy for how to tackle the problem called “Igniting Change” and has spent most of 2012 deciding which nations to target initially.

The final choice will be unveiled in September, but is likely to include Tanzania and Kenya, and possibly Bangladesh and maybe Vietnam.

They were chosen according to a set of criteria. “One is the need. What’s the percentage of the population which is still burning biomass in a very inefficient, ineffective way today?” Muthiah said.

“The other is the impact we can have – on health, on the environment, on women’s empowerment indicators. What kind of difference we can make.”

China and India hold a special status in the alliance. Both have already run successful clean cookstove programs, and can bring their experience to bear as well as working towards upgrading existing stoves.

“What the alliance won’t be doing is making stoves and selling stoves. That’s not our goal. Our goal is to create a thriving market that can do that sustainably,” said Jacob Moss, director of the US cookstoves initiative.

The aim is to expand the use of stoves which use as little fuel as possible but give off high energy in return, while also reducing emissions.

One wood-burning model under development includes a little fan and produces enough thermal electrics to charge a small cell phone.

There are also liquefied petroleum gas stoves, and stoves which run off charcoal, a fuel of choice in many urban African environments.

A variety of different models are in production or development to fit local traditions and cooking customs.

Cost remains an issue though with the cheapest stoves still possibly retailing for around $15 which can be a fortune to the world’s poorest, and the cinder-block ones at the high end of the price range at about $120.

But the alliance is hopeful that micro-finance institutions and innovative schemes – such as one in Rwanda in which firewood would be exchanged for fuel pellets with the stove thrown in free –will bridge the gap.

“Is it more expensive to have someone who has very little resources spend five bucks, which is still a lot, on something which doesn’t really solve anything for them? Or to find a solution that can really start to transform their lives?” asked Moss.

“We’ve got to figure out how to get them something that’s going to improve their lives and maybe even save their lives.”