How to do Ilocos Norte in six hours | Inquirer Lifestyle 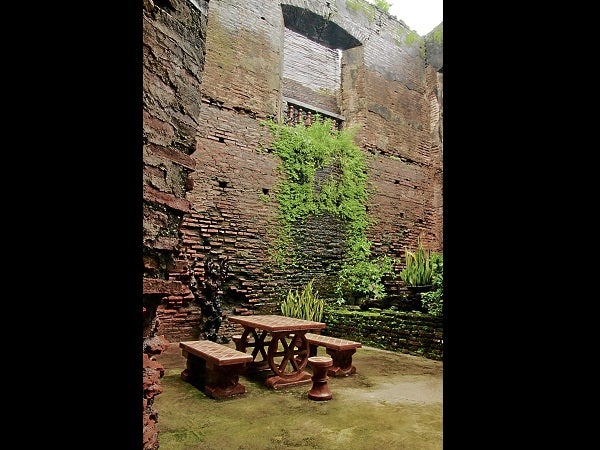 How to do Ilocos Norte in six hours

Fresh from medical school in the early ’60s, Joven Cuanang took his backpack and toured the world. While sightseeing in the Mediterranean, he noticed the brick and stucco houses that reminded him of his origins in Ilocos Norte.

It was a lightbulb moment for him that there was no place like home.

Today, the brick-clad Laoag International Airport introduces the first-time visitor to the old world charm of Ilocos.  And, if you had only six hours to see Ilocos Norte, the country’s leading neurologist will take you to its iconic landmarks—the Paoay and  Sta. Monica churches, the sand dunes, Juan Luna’s brick shrine, memorials of the Marcoses,  the brick Museo Ilocos Norte, and the heart of the famous Ilocano empanada with its characteristic chewy orange crust.

Taking a breather as medical director of St. Luke’s, Cuanang, or “Manong” as he is called, frequently flies to Ilocos Norte to serve in public health and tourism, upon the request of its governor, Imee Marcos.  He also checks on Sitio Remedios, a heritage village he built along the coast of Currimao.

Sitio Remedios recreates the model of a prewar Ilocano town—a stony avenue lined with gushing fountains and bold lotus leaves that frame the Stations of the Cross. At the end of the pathway, St. Michael the Archangel is poised to drive away the evil spirits.

The chapel overlooks the central plaza and the eight ancestral homes along the perimeter.

Behind the chapel are a function room that pays homage to Luna and dormitories with a courtyard that represent the cloisters and convents of the past.

“It’s an ideal that shows the balanced physical planning,” explains its architect Rex Hofileña.  “Unlike today, the original heritage has been overtaken by unprogrammed development.”

This exclusive resort hosted novelist John Irving (“The World According to Garp” and “Hotel New Hampshire,” among others) and was a setting for an upcoming romantic movie starring Erich Gonzales and Thai actor Mauro Maurer.

The unfussy Ilocano cuisine is served with no apologies.  Breakfast is champorado, made from glutinous brown rice, muscovado sugar and native chocolate, topped with crispy and salty swordfish; and Ilocano longganisa or short pork sausages seasoned with Ilocano salt and tomatoes.

The next day Dr. Cuanang whisks us off to the sites and regales us with stories as the landscape unfolds.

He says one can’t talk about Ilocos without mentioning the Marcos family. For one, the late President Marcos left a legacy of a smooth road network. Meanwhile, Ilocos Norte Gov. Imee  Marcos has been working quietly  to improve the quality of life and adding vitality to the arts scene. She has been commissioning young artists such as  Leeroy New, Robert Alejandro and Plet Bolipata to design artistic waiting sheds and public sculpture in the capital.

Our first stop is Juan Luna’s shrine, a reconstruction of the painter’s brick house in his hometown, Badoc. It is an exhibit place of large prints of Luna’s famous paintings: “Spoliarium,” “Parisian Life,” “Blood Compact,” “Death of Cleopatra” and photographs of Luna, Jose Rizal and Valentin Ventura after their fencing.

The home is furnished with status symbols such as a four-poster matrimonial bed and rare butakas (birthing chairs) with curves on the backrests and arms.  High chairs were placed by the window in the old days so people could watch goings-on on the street.

The Paoay Church, named a Unesco World Heritage Site, is the province’s icon for its local architectural elements. The style is dubbed Earthquake Baroque because of its oversized buttresses built to survive earthquakes. The façade fuses Oriental elements such as the gables, and ornamental details done on stucco such as flowerettes,  clouds, stars and ferns. The sun with eight rays is a prevailing Ilocano motif.

After satisfying the spirit, churchgoers then gratify the body at Herencia Café which offers pinakbet pizza, a fusion of the Italian crust and the traditional vegetable stew.  It tastes like vegetable pizza with bagoong instead of anchovies. Some locals recommend the poqui-poqui (eggplant omelet) pizza.

Palace by the lake

Once a setting for such movies as “Temptation Island” and “Himala,” the Paoay Sand Dunes  is being marketed as a sporting destination. It offers 4×4 tours and sandboarding.

Last May,  it became the setting for  the arts festival “Himala sa Buhangin,” a reference to the Ishmael Bernal’s classic film  “Himala.” The focal point is Leeroy New’s bamboo installation of a galleon.

We take a lunch break at La Tabacalera, the retail center in Laoag, which our host describes as a dialogue between antiquity and modernity.  The 19th century tobacco factory was transformed into Museo Ilocos Norte, dubbed as the country’s best museum, thanks to the efforts of its director Al Valenciano.

This well-curated exhibit transports the visitor to another era—tools for fishing and farming, a typical home of the well-to-do and the farmer, native appliances and utensils, musical instruments and the old-fashioned way of curing tobacco.

The museum also honors its cultural heroes such as the last living calesa makers. In the late ’60s, there were over 2,000 calesas (horse-rigged carriages) traversing the province. As of last count several years ago, they were down to less than 200.

Adjacent to the museum is the arcade which houses  fashion and home boutiques and Imee Marcos’ Johnny Moon—Juan Luna’s English name.  Our appetizers are fried dragon fruit rolls while the piece de resistance is the Johnny Moon pasta, topped with shellfish, shrimps and native garlic oil accompanied by bread with sweet tomato jam.

The governor even has Imee Wine, made from mango fermentation.

If India has its palaces by the lakes, Paoay has the Malacañan of the North.  While the typical Ilocano home is compact, the former president’s official residence is grandiose. The luxury that remains is the space that opens to the panoramic Paoay Lake.

The grand salon on the second floor has several islands of neoclassical Betis furniture that serve as areas for conversation.

Another expression of luxury is the prodigious use of narra, particularly the extra wide narra planks and  the sweeping staircase with broad narra treads. Marcos’ bedroom, dressing room and bath are the size of three-bedroom luxury condo unit.

For the romantic tourist, Dr. Cuanang recommends Sta. Monica Church in Sarrat. Imelda Marcos knew how to select the perfect wedding venue for daughter Irene.   Forests of narra trees surround the brick church which is attached to a bridge and a cloister.

Complementing the ancient ruins and a deep well are the sculptural arrangements of native plants such as the espadas, san franciscos and bromeliads.

Our last stop is Batac, where Marcos’ remains are kept.

The former president’s mausoleum is situated beside Imelda’s house. The mausoleum is an expanse of black with eerie music wafting in the air. Bouquets of white flowers, made from shells, encircle Marcos’ waxed figure.

After paying tribute, we visit Imelda’s house. The design resembles an ilustrado house with a big silong or basement and a sweeping staircase leading to the grand salon. On the landing, a life-size portrait of Imelda is made from tiny mosaic tiles.

Visitors are greeted by a gilt-framed mirror. Animal skin rugs are scattered around the room.  The tables and shelves are filled Oriental porcelain and other gilded gewgaws. A menagerie of stuffed animals lies under a marble-topped table.

Imelda is often sighted at  168 mall in Binondo, Manila. Now we know where she keeps her shopping finds.  Santa Claus needlepoint pillows add color to the sofas and divans. The dining room is decked with  woodcarved furniture and a wall carving, done by Julian Flores, one of the greatest artisans in Betis, Pampanga.

Our final stop is merienda at Glory’s Empanada. Once, a plastic-gloved Kris Aquino went on TV to learn how to make the Ilocano empanada in this place. The lady rolls out the dough, puts the green papaya, mung bean and meat,  folds it,  trims the edges with a plate and dips it in vegetable oil.

Traditionally, empanada  was served only on special occasions. Today, it has become a favorite snack.

Finally, we just love the ubiquitous photographs of Imelda Marcos parodying herself. There are images of the former first lady lying on a raft, holding a music sheet and singing or holding a ladle and fish at a wet market. She makes it more fun in Ilocos Norte.