When the Crumbs Come Marching In | Inquirer Lifestyle ❮ ❯ 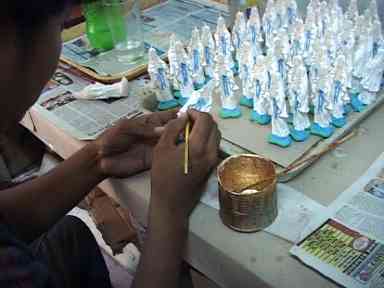 When the Crumbs Come Marching In

HOW much does it take to alter a mindset and to change a life? How far can loose change go to lift up a family, empower a community and possibly even release the nation from a cycle of debt and dependency?

One man did the math and came up with amazingly simple answers. To the first question: Beinte-singko sentimos (25 centavos). And to the second: “Anumang magaling, kahit maliit, basta’t malimit, ay patungong langit [anything good, no matter how small but done frequently, leads to salvation].”

When Pondo ng Pinoy (PnP) was launched in 2004, Manila Archbishop Gaudencio B. Cardinal Rosales had figures to show how x number of Filipinos, setting aside a 25-centavo coin each day, everyday, could accumulate quite a tidy sum. Enough to make an impact. Enough to wield a measure of power or, more precisely, to be empowered. Enough to provide basic needs and services without waiting for government to do it. Actually, the cardinal-archbishop once remarked, even enough to eventually pay off a huge chunk of the country’s debt.

In six years, PnP’s collection of 25 centavo coins has totaled more than P200 million. Not enough to fund capital infrastructure, and surely way off the mark in easing up the government’s debt. Cardinal Rosales chuckles at the mention of this, but just as easily recalls that Pondo ng Pinoy was never meant to be simply a tally of numbers. Setting aside coins may be at the heart of PnP, but keeping count of the amount raised isn’t what it’s all about.

Instead, the Cardinal explains, Pondo ng Pinoy is an unfolding and continuing demonstration of the strength and power of “crumbs.”
The PnP story begins in a rich man’s house. The scene then pans over plastic water bottles filled with coins, and shoots fast-forward into tight congested settlements in the urban maze and into remote stretches of the Philippine countryside.

It is a tale of two parts. The first is Biblical, and often recounted as backgrounder to the second part. As the story goes, a rich man entertaining wealthy guests at the dinner table is embarrassed and irked by the sight of a beggar at his doorstep. The man, covered with sores and weak from hunger, pleads not for a full meal but only for the scraps and crumbs that fall to the floor from the laden table. In the afterlife, the beggar winds up in heaven, and the rich man is in a place of eternal suffering. Denied the possibility of ever crossing over to heaven, the rich man hopes for a chance to warn others of a similar fate unless they change their ways.

The second part is an attempt to make the story play out differently – to view it not just as a fable of the “poor man in heaven-rich man in hell” but to focus instead on the “crumbs” from the table, in this case, the 25 centavo coin, considered of little or no value, the coin brings about much good when it is gathered from both the rich and the poor.

Launched nationwide soon after he was appointed Archbishop of Manila upon the retirement of Cardinal Sin, Pondo ng Pinoy actually had its roots in Bukidnon, where Rosales served as bishop 28 years ago. Meeting with farmers to address problems caused by illegal logging, he realized that small acts put together for a common goal could help people “live their Christian lives to the fullest.”

Later in Batangas, where he was appointed Bishop in 1993, he followed the same philosophy and launched Pondo ng Batangan. This became a template of sorts for what has now been expanded to Pondo ng Pinoy. The system encourages people to set aside small donations – regularly and consistently – in effect creating a mindset of sharing, no matter how little, and moving collectively.

The funds are managed by the Pondo ng Pinoy Community Foundation, Inc., which considers development-oriented programs or projects that directly benefit poor families within three months to one year from the start of implementation. High on the priority list of programs for consideration are those concerned with health, livelihood, education and housing.

No program or project is deemed too small for Pondo ng Pinoy – whether in terms of resource need or impact. In Laguna, for instance, PnP has supported a program that provides nutritious snacks for children and more significantly, hopes to change their eating habits. At the Tala Leprosarium, PnP extends help to the Hansenites, or people with leprosy, by complementing the hospital’s meager food budget. Hapag-asa is an ongoing and far-reaching feeding program for poor children aged 3-12 implemented in several areas in the country. Managed by the Assissi Development Foundation, Hapag-asa has provided meals for more than 73,000 children.

Micro-financing and micro-enterprise projects are truly “small” ventures, but with great rewards as their beneficiaries are families that otherwise have no access to funding. Priority is given to enterprises in the fields of ecology, environment, waste management, farming, hog raising, cottage industries, metal and wood working and cooperatives.

Over the past six years, Pondo ng Pinoy has supported a total of 1,081 projects that have helped feed and improve nutritional levels among children, provided education for underprivileged children and adults, created healthy living conditions in depressed communities and provided families with income generating opportunities and livelihood skills.

The greatest impact of Pondo ng Pinoy, however, lies beyond statistics. In many families, in their homes, schools and offices, one finds plastic water bottles filling up, day by day, slowly but surely, with 25 centavo coins. Among many individuals who believe that good may come about from “crumbs” put together, PnP has become a daily habit of sharing what little they may have, surely and steadily, for the greater good. •