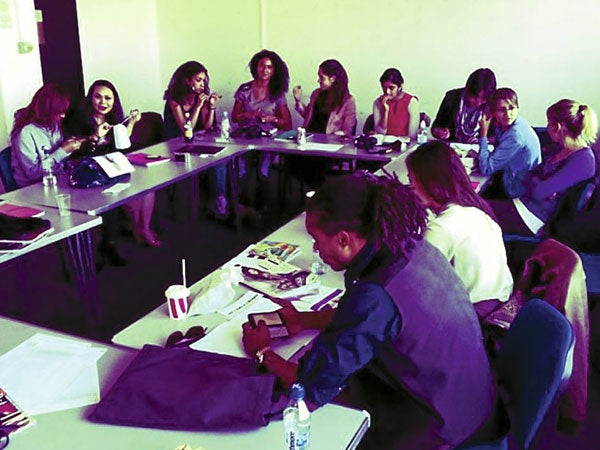 If Pablo Cabahug was in awe of his classmates, it was no surprise. His class was, after all, at the Central Saint Martins College of Art & Design (CSM)—the prestigious school in London that has produced many of today’s trailblazing fashion designers such as Stella McCartney, Alexander McQueen, John Galliano, Zac Posen, Phoebe Philo.

His classmates came from all over, including Hong Kong, Malaysia.

He was at Central early this year for an intensive fashion workshop—his prize for having won the LOOK of Style Awards last year, a search mounted with the British Council by Inquirer Lifestyle, Look Magazine and Samsung.

When he won the award, his career went on the fast lane. Now he was being recognized as a fashion designer.

Before this, his name was usually associated with those of two fashion stalwarts: director Jackie Aquino, whom he assisted in productions for a decade, and designer Randy Ortiz, whom he apprenticed under for eight years.

But in last year’s LOOK of Style Awards, Cabahug finally had the spotlight to himself, earning the title Young Designer Of 2010 for his seamless melding of gray duchesse satin and metallic trimmings with jusi on clean, slim silhouettes, his elegant take on the competition’s theme “Breakthrough.”

“I guess it was a confirmation that I know how to design,” Cabahug says shyly in a coffeehouse almost a year after his life-changing win.

That, of course, is an understatement. Soon after his name was announced after a mini-fashion show of competitors’ collections at the Establishment in The Fort in October 2010, Cabahug was swamped with offers.

LOOK of Style co-sponsor Samsung approached him for two weddings, and designer Kate Torralba tapped him to come up with creations for her Leg Love line of stockings.

“Super-overwhelming,” he recalls the frenzied period. “It really opened doors for me.”

Once the dust had settled, Cabahug was ready to claim his grand prize, a certificate course in fashion design and marketing at London’s prestigious Central Saint Martins College of Art & Design (CSM). He finally flew to London in April 2011.

The designer, who has maintained a steady stream of clients (mostly for corporate uniforms) in his Makati shop for the past two years, never studied fashion design formally. There was that pattern-making course he took at the renowned Slim’s Fashion & Arts School, but his work as Aquino’s assistant forced him to drop out.

“One thing about pattern-making,” he notes, “is that you cannot learn it from textbooks.”

Still, he was very grateful for what the intensive, weeklong course taught him. He was in awe of his 14 international classmates, “all fashion pros in their own right,” he says. “Super bigatin. I was blessed to share a class with them.”

There was the entrepreneur from HK who was putting up her own fashion shop, and the superstar soccer player trying to launch his T-shirt line. Eventually, a Malaysian classmate introduced Cabahug as a successful fashion designer in Manila. The next day, his teacher, Erica Charles, who had obviously Googled Cabahug, approached him and said, “I like your gray gowns.”

He “super learned a lot” in his classes in textiles, coloring and forecasting, the subject he enjoyed the most. The crochet details in his latest creations were inspired by his Saint Martins experience. A marketing class made him appreciate the importance of media (“That’s why I love this!” he swoons in interviews) as well as networking with other stylists.

Cabahug’s biggest takeaway from his 11-day stay in London, however, is the fact that he still sees himself as a work in progress. He’d like to improve his skill in menswear, “because people say my menswear looks like Randy’s,” he says, chuckling. He’s also thinking of going back to CSM next year for a course in—surprise—pattern-making.

After CSM, Cabahug took quick trips to Paris and Barcelona before flying back to the Philippines to claim his other LOOK Of Style prize, a spot in the Cebu leg of Inquirer Lifestyle’s Face Off fashion show. Watching the highly anticipated event from the sidelines for years as Aquino’s assistant, Cabahug remembers wishing to himself, “Sana ako din.”

When his turn finally came, his creations shared the stage with the works of Rhett Eala, Cary Santiago and his mentor Ortiz.

As for his third prize, a one-on-one mentorship program with designer Lulu Tan-Gan, Cabahug plans to schedule that in the coming months.

What’s interesting about this LOOK Of Style Award winner is that he never liked contests at all.

“I feel bad being compared to others,” he shudders at the thought. “I’m like, why? Naghahanap-buhay lang naman tayong lahat, ’di ba?”

True enough, when he failed to make heads turn in a Fashion & Design Council of the Philippines competition he joined in 2004, Cabahug fell so hard, he actually wondered if fashion was the right career for him.

It was Aquino who set him straight, reminding his charge that “in this industry, it’s very important to wait for your perfect time. When your perfect time comes, you have to seize the moment.”

Cabahug’s perfect time would come six years later, ironically, through a competition. This time around, he sought the opinions of Aquino and stylist Luis Espiritu before signing up.

“I didn’t want to get hurt again,” he reasons.

He also found his inspiration early. While surfing the Net, he was struck by an article about robotics in France, “or how doctors are replacing the human heart with a robotic heart. I thought, wow, galing!”

Days later, the designer got a call from LOOK Magazine editor in chief Melanie Cuevas, informing him about the theme for the LOOK Of Style Awards. When she said “Breakthrough,” Cabahug’s imagination took off.

Sticking to what he does best—simple lines over complicated couture—he proceeded to create his award-winning collection. But his sophisticated and elegant aesthetic wasn’t the only factor that impressed the panel. Designer judges like Cesar Gaupo and JC Buendia scrutinized his outfits.

These days, as organizers lay the groundwork for the second LOOK Of Style Awards, it’s business as usual for its first-ever winner. Cabahug’s corporate uniform clientele is expanding, and his Holiday 2011 collection for Leg Love comes out this October.

“I’m not shy about that,” says the loyal assistant. “I’m just so fortunate to have mentors who, when they see na lumalaki ulo ko, binabatukan nila ako!”

Even after achieving a fashion designer’s dream, Cabahug keeps his feet on the ground. “I don’t dream big and I don’t dream much,” insists Cabahug. “I just work hard.”

An annual search for the next generation’s promising young designer, the 2011 LOOK Of Style Awards is a collaboration between Samsung, LOOK Magazine, Inquirer Lifestyle, and The British Council of the Philippines. To join, please log on to www.facebook.com/lookmagazineph or follow www.twitter.com/lookmagazine for go-see schedules and updates on the competition.