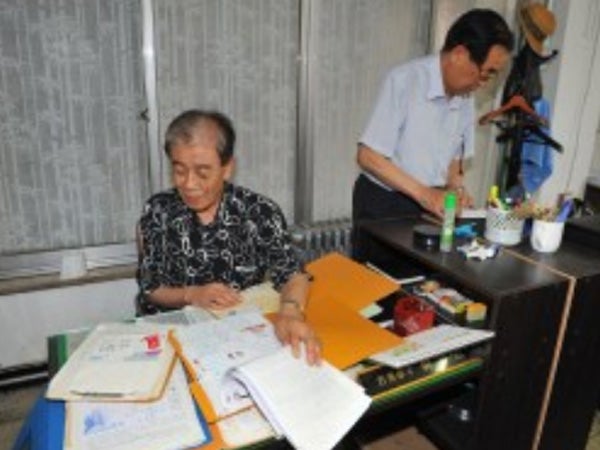 South Korean Kim Kyung-Jae (L) and Shim Goo-Seob (R) check mails from North Korea in Seoul on July 30,2012. They testify to the success of Kim in reconnecting some of the tens of thousands of family members separated for decades by the world's last Cold War frontier. There are no civilian mail or phone connections across the closely-guarded inter-Korean border, and many do not even know whether loved ones are still alive. AFP / KIM JAE-HWAN

The imprints with North Korea’s official name testify to Kim Kyung-Jae’s success in reconnecting some of the tens of thousands of family members separated for decades by the world’s last Cold War frontier.

There are no civilian mail or phone connections across the closely guarded inter-Korean border, and many do not even know whether their loved ones are still alive.

Sporadic reunions arranged by the two sides since 2000 have brought together only a fraction of those seeking news, and have been halted because of political tensions.

Kim and his colleagues in a nine-member foundation called the Separated Family Union try to bridge the gap, using the postal systems of third countries or brokers.

Kim sends about 70 to 80 letters and packages every year to North Koreans at the request of families in the South. It takes roughly 30 days for letters to arrive and another 30 days for a reply to come back.

In the case of letters, Kim mails them from Japan, where he is based. But Tokyo restricts the contents of packages to the North to comply with UN sanctions, so those are sent through China.

Brokers handle their passage through the Chinese postal system and are also used to track down long-lost family members.

For the professional intermediaries who cross the border between China and North Korea, a home town is all that is necessary to discover whether relatives are still alive, and if so, their address.

“Most letters don’t contain any secrets or criticism of the (North’s) communist regime because they are all subject to screening,” said Kim, speaking at the foundation’s office in Seoul.

But sometimes letters cannot be sent by a public route, in which case Shim Goo-Seob, co-founder of the foundation, takes over and arranges for a broker to make a more unorthodox delivery.

The document could be tied to a rock and thrown over a narrow section of the Yalu river border with China, or sneaked through in a container truck.

Until a few years ago all postal traffic was one-way, with South Koreans looking for relatives in the North. But now many North Koreans are seeking family members across the border through the brokers, Kim said.

“The main reason is because they miss them, but partly it’s also because the brokers leak information that South Koreans are rich and can send necessities and money,” he said.

“Relatives in the North ask us to send anything from rubber to used clothes, but what they want most is medicine for disease, mostly tuberculosis, and food to combat malnutrition.”

Basic household items are also in demand. “Things that we have, like scissors and knives? They don’t have them,” said Kim.

Brokers take about 30 percent commission if transferring money, and charge roughly 230,000 won ($203) to deliver a 20-kilogram (44-pound) package through the Chinese post.

Despite the high commission and the difficulties, families in the South keep sending packages because they make such a difference in the poverty-stricken North.

“They (Northerners) always send letters saying the small efforts and money we’ve put in here has made a big difference there,” said Kim.

“Southerners think they know how bad the situation is there, but it’s a whole lot worse than it appears. Things that are trivial to us here can be of great use there.”

South Koreans who receive a letter from the North for the first time usually burst into tears out of pity at the plight of their relatives, he said.

Kim himself left the North in 1950, the first year of the Korean War, with all his brothers. But he had to leave his youngest sister behind. He was 19 and she was eight.

“That’s the last time we saw or talked to each other until 1990, when I miraculously heard her address (through an acquaintance allowed to visit the North) and we started exchanging letters,” said Kim.

The foundation’s work is supported by donations from private companies and funds from the South’s unification ministry.

Kim wants to send as many letters and packages to the North as he can, until his dying day.

“It’s unrealistic to hope the two Koreas will be unified while I’m alive,” he said. “But I long for freer communication between families because I want to help my sister and other families reunite.”