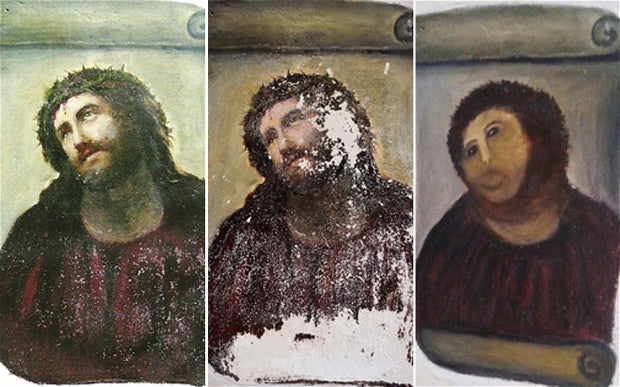 MADRID—It’s been dubbed the “world’s worst restoration”, but a 102-year-old church painting of Christ that now resembles a pale monkey is drawing visitors by the hundreds to a sleepy Spanish town.

The northeastern town of Borja garnered global press attention after residents decried the well-meaning restoration efforts of Cecilia Gimenez, described as being in her 80s, who made a horribly botched attempt to restore a flaking oil painting of Christ wearing the crown of thorns.

The “restored” painting looks like a pale monkey’s face surrounded by fur, with misshapen eyes and nose, and a crooked smudge for a mouth. Some media have called it the worst restoration in history.

On Saturday, hundreds of curious visitors queued up outside the Iglesia del Santuario de Misericordia church, where the image is painted on a column.

“The previous painting was also very pretty, but I really like this one,” a woman who had travelled to the town said on public television.

Titled “Ecce Homo” (Behold the Man), the original was painted in 1910 by an artist called Elias Garcia Martinez.

Almost 18,000 people have now signed an online petition to halt the town’s plan to return the painting to its pre-restoration glory.