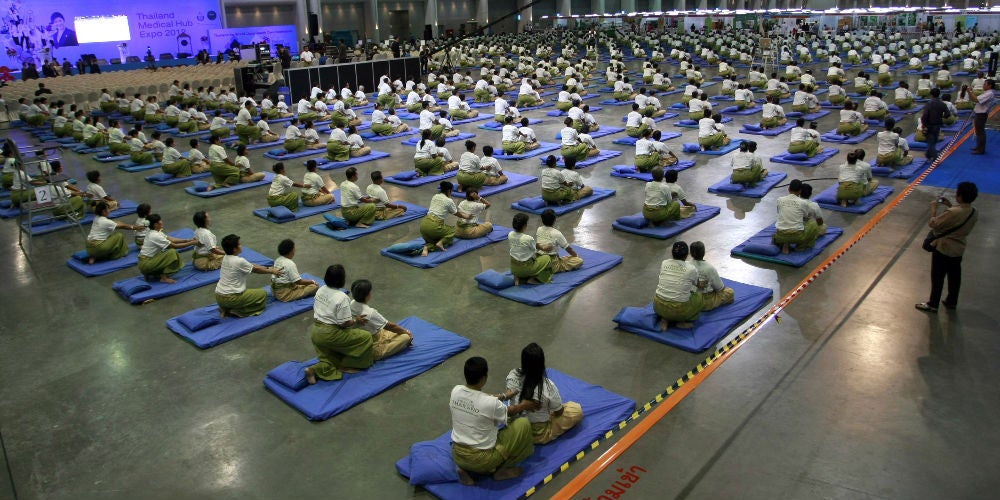 Thai masseuses perform a mass-massaging at a sport arena on the outskirts of Bangkok, Thailand Thursday, Aug. 30, 2012. Thailand has long been known as the massage capital of the world. Now, it has a Guinness World Record to prove it when some 641 massage therapists mass-massaged 641 people simultaneously for 12 minutes to win the honor Thursday at an indoor arena in Bangkok. The event was organized by the Health Ministry to promote the Southeast Asian nation's massage and spa industry. (AP Photo/Apichart Weerawong)

BANGKOK—Hundreds of people pushed, prodded and stretched their way to a new world record for the biggest simultaneous group massage, in the Thai capital Bangkok on Thursday, organisers said.

A total of 1,282 entrants took part in the event at a convention centre, smashing the previous Guinness World Record of 526 people set in Daylesford, Australia, in March 2010.

“I feel excited and thrilled. I want Thai massage to be famous all around the world,” said 50-year-old masseuse Pinprapar Meedej.

The event was staged by the Thai government in an effort to lure foreigners to a country whose tourist-friendly image has been tested in recent years by deadly floods, political violence and concerns about crime and safety.

“We had expected about 800 pairs but on the day of the rehearsal only this number showed up,” said event spokeswoman Supaporn Rungcharoenkiat. “But we’re sure that we broke the record.”

The kingdom wants to shed its reputation for sex tourism — including brothels disguised as massage parlors — and promote itself as a growing hub for medical tourism.

“Thailand is the number one medical hub. You can be cured with Thai massage. There’s no need to use medicine and it’s 100 percent safe,” said 39-year-old massage instructor Duangvarat Insee.

Most of the people who took part were qualified massage therapists, but others were just happy to enjoy a free session of “the lazy man’s yoga”.

“That was great. My legs feel good and I can walk better,” said 72-year-old pensioner Mora Saelim.