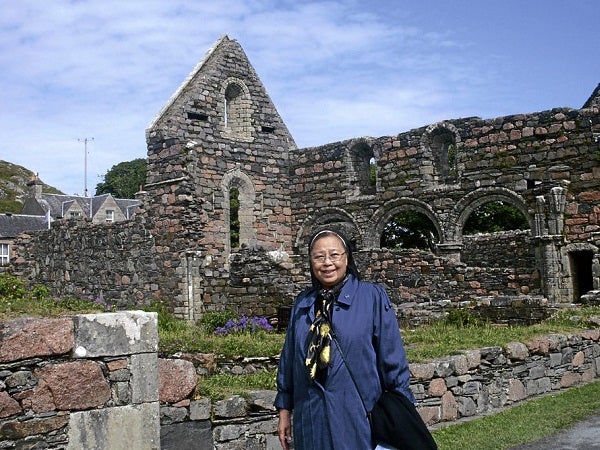 In Iona, universal love is possible

The story of Iona begins with Findhorn, a small village in the northeast of Scotland. To go there, I had to fly to Inverness, which has a very small airport. I had to wait for the 10:05 p.m. bus that would bring me to Forres. And believe it or not, there was no one left at the airport except the woman at the information and the woman who helped me report that one of my suitcases had been left in London.

At the bus stop I took a taxi to bring me to Findhorn Foundation, but by 11:30 no one was awake in Findhorn Park, so he brought me back to the Findhorn Village, to the Crown and Anchor Inn where I had to stay overnight. The next morning, I took another taxi to Findhorn Park, where I was enrolled in the so-called Experience Week Course.

The Findhorn Foundation is a spiritual and educational center. It is also a very active ecological community. It was founded by Peter and Eileen Caddy and Dorothy MacClean in 1962. They started with two caravan mobile houses in the sand dunes of Findhorn village after they lost their jobs.

Dorothy and Eileen seemed to have some connection with nature spirits because they were able to grow a flourishing garden and even grow the famous 40-lb cabbages on sand dunes. It slowly developed into an educational and spiritual center as well as an ecovillage. There are two main centers—the so-called Park and the Cluny College.

Findhorn foundation is supposed to be a New Age establishment, but in all my stay there, nobody  talked to me about it. I suppose they are trying to live the authentic principles of the New Age, not the caricature or exaggerated practices  They are just a community trying to develop a personal and communal spiritual life in a setting that is ecologically, economically, culturally, and spiritually sustainable.

The Experience Week is the prerequisite for further courses that are offered. We were 19 in the course from different countries. Our facilitators (usually called focalizers )  were Mattie (Australian) and Ursula (Swiss). The course consists of workshops, meditations and service.

An atmosphere of openness and trust is built up so that everyone can freely share what they want to share—sometimes very deep sharings—about their spiritual journey, present problems, etc. I realized here that universal love is really possible.

We all had to do some service. I chose the dining room but this had several tasks. I chose washing dishes. I had to work with a giant washing machine named Leonardo, and I learned to wash hundreds of cups, saucers, plates, and glasses for three hours with a break in between. But however hectic the work was, there was always time for a short meditation to become truly present.

After the work, there was a so-called attunement where we came together again and shared how we found the work of the day.   It is a very good example of prayer and work truly woven together.

We also learned circle dancing, and so-called games which are not only fun but gave us insights into ourselves and others and gave us the chance to show compassion, understanding, and love for one another.

We had a half day project which consisted of weeding in the organic garden—a very beautiful place. We also visited the Living Machine which is a kind of bio-digester, but its main objective is to transform the waste into water that is then returned to the earth as ground water.

There was also a small shed called a “boutique.”  Anybody could get anything they need there—coats, shoes, sweaters, anything. And you can leave anything you also want to give. It is like ukay-ukay without having to pay.

I lived in a bungalow with three others. The meals were all vegetarian but tasty. There were meditation huts called “sanctuaries.”

Sometimes there were shows, presentations or concerts in the Universal Hall. For example, on our first night we had a documentary on “land awakening” produced by one of our participants, a filmmaker from Mexico living in Canada. It is a series of interviews with people embarking on organic, sustainable, creative agriculture.

One feature that interested me was the so-called seed balls.  They put all kinds of seeds—trees, flowers, vegetables, etc.—into clay balls and then throw these in the farm or garden and just allow the earth to produce whatever seeds start to grow.  This is supposed to change the quality of the soil and determine which plant is the best suited for that particular lot.

After the Experience Week I found myself with three other participants on board a Findhorn bus to take us to Iona. This is a five-hour trip with three ferry crossings.  We arrived at Mull, where we had to get the last ferry on a very cold, windy, wet afternoon.

I loved the cottage at first sight. It was beside the sea, with a glass porch facing a beautiful enclosed garden.  Its name means “white sands,” because just below it is a white sand beach.

Iona is a small island, so small you could walk from one end to the other in about an hour. It is supposed to be the oldest rock on earth—2,800,000,000 years old. In 563, St. Columba arrived from Ireland with 12 monks and established a monastery there which became the center of the Scottish Church in those times, known as a center of learning and artistic excellence.

There were Viking raids, and it said that 70 monks were slaughtered on the white sands below our cottage. In 1200, the Chieftain Reginald established a Benedictine Abbey on the ruins of St. Columba’s monastery and an Augustinian Nunnery some distance away.

The Reformation in the 16th Century put an end to the monastic life in Iona. In 1974 the Abbey was restored by the eighth Duke of Argyll. In 1938, the Iona Community was established by the Reverend George Macleod. It is now a center of pilgrimage and of a vibrant, socially committed ecumenical community of 250 members from all major Christian denominations in Britain.

We took turns cooking and washing dishes. We had common meditation in the morning and in the evening. For four days we played a game of Transformation, which is not really a game but a powerful exercise which helped us know ourselves and each other better and actually empowered us to fulfill the objectives we set out for ourselves at the beginning of the game.

Aside from our scheduled activities, we also took part in the Justice and Peace service and the communion service in the Abbey. I also went to the Mass at the Catholic Retreat Center. We even attended a village dance (Cailidgh—pronounced Keyle). Scottish circle dances include a lot of jumping.  I caught on quickly and enjoyed this Scottish dance immensely.  In fact, while I was taking a walk later, a woman I met on the way told me, “I saw you at the village dance, and you dance wonderfully”—which made my day!

Words can’t really capture the magic that was Iona. It does not quite express the feeling of bliss as one gazes at the gentle waves of the sea; the sense of mystery as one watches the oncoming mist that seems to make the outside world disappear, the calmness and serenity that comes over you as you sit on the benches inside the ruins of the nunnery; the joy of awakening to the burst of sunrise that floods your bed.

I may never have the opportunity to return to that mystical island, but it does not matter, because truly, Iona is in the heart.