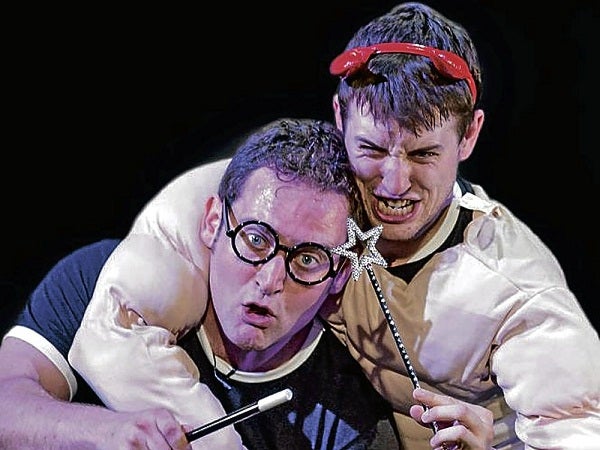 10 reasons you should watch Potted Potter

As writers and stars of Potted Potter, The Unauthorized Harry Experience-A Parody By Dan and Jeff, the two have created a comical (and yes, magical) show that has been enjoyed by audiences across the world—from Edinburgh and London to New York and New Zealand.

In 2005, a bookshop in London asked Dan and Jeff to create a five-minute show summarizing the plot of the first five books to entertain people who were waiting for the release of the sixth book. A year later, the hour-long version of Potted Potter was born.

Potted Potter is currently running in Manila and since Dan and Jeff are still performing in the New York production, the touring cast comprised of Jesse Briton and Gary Trainor are here to bring you a hilarious Hogwarts experience.

We had a blast at the show and we think you would too. Here are ten reasons you should watch Potted Potter:

1. It’s funny. Really funny. So funny that our throats hurt from all the laughter.

2. It’s a great and unusual way to revisit the world of Harry Potter. And who doesn’t want another dose of Harry?

3. You’ll get to play Quidditch. Seriously.

4. The show was tweaked for Filipino audiences. Trust us, you’ll get a kick out of the Pinoy pop culture references.

5. You wouldn’t just be sitting there—you’ll be joining the fun.

6. Jesse and Gary are cute. They must have graduated at the top of Professor Flitwick’s because they’ve charmed us. Jesse reminds us of a younger, goofier Hugh Grant—and we’re pretty sure he’s never messed with Bridget Jones. (And if you’re lucky, you can meet them after the show.)

7. Dobby. He’s so adorable, you’d want to bring him home.

8. You will be surrounded by other happy Potterheads.

10. Because the show is magical—in its own strange way.