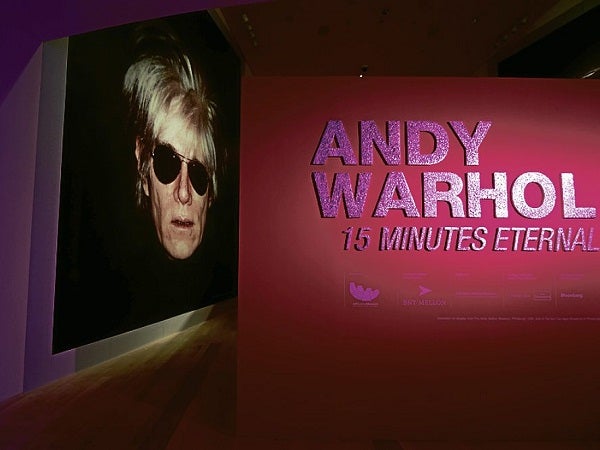 Andy Warhol beyond his 15 minutes

One of Andy Warhol’s famous phrases was, “In the future, everyone will be world-famous for fifteen minutes.”

He said this in 1968, in the pre-YouTube and pre-Twitter days. This phrase would be a prophetic—today is the social media era of disposable fame.

While this phrase applies to many a character today, this is not the case for Andy Warhol, whose artwork has the capacity to draw in even those who are far removed from art appreciation.

Before entering the “Andy Warhol: 15 Minutes Eternal” exhibit at the Marina Bay Sands ArtScience Museum in Singapore, the only Warhol work I was familiar with was his artsy interpretation of the Campbell’s soup can. It was perhaps one of his most “borrowed” pieces, apart from the iconic silk screen of Marilyn Monroe.

To mark Warhol’s 25th death anniversary, a huge collection of Warhol’s iconic pieces have been on display since March 2012 in Singapore. The exhibit features over 260 paintings, sculptures, mixed media art, self-portraits and videos. The collection brought over for the exhibit is the largest in Asia to date.

The collection combines pieces from different periods of his life, from the early ’40s to the ’80s. A replication of his Silver Factory is also present (I’ve never seen so much foil used outside of post-Christmas family reunion meals).

It will take only a few sketches to show how Warhol had complete mastery of line and color. Even a sketch using minimal strokes could evoke a mood or feeling. His sketch of legs clad in red stilettos didn’t show a face or expression, but something about the way the legs were drawn evoked an image of a chic New Yorker  on her way to Barney’s to shop.

The videos on his work process are fascinating. Andy Warhol knew how to use every possible tool to his advantage, from photography, paints, color to silk screening. He loved mixing different media and coming up with quirky results.

Replicas of tools he used frequently are also on display.

His portraits, both of himself (some on Polaroid) and of famous personalities, have been brought in as well. Marilyn Monroe, Jackie O, Liz Taylor, Bianca Jagger—all seen through the eyes of Warhol.

His works depicting famous brands are in grand display, featuring different kinds of Campbell’s soup, as well as boxes and boxes of Kellogg’s Corn Flakes.

Whether you are an art buff, a graphic artist or just someone who appreciates beauty, you must find time to visit Andy Warhol, a man whose works will linger with you, way beyond 15 minutes.

Andy Warhol: 15 Minutes Eternal will run at the Singapore ArtScience Museum till