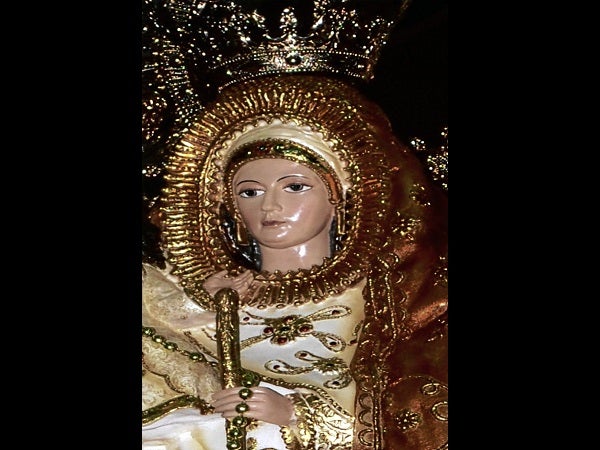 Filipinos in Guam welcome Our Lady of Manaoag; Kapampangans in Los Angeles mark fiesta of Remedios

While tenor Samuel Acosta of the Powervoice Choir sang Schubert’s “Ave Maria,” the flower-bedecked carroza bearing Our Lady of the Rosary of Manaoag was borne in a procession to the altar of the Church of St. Anthony in Tamuning, Guam.

The congregation, which included the Federation of Pangasinenses, was moved to tears. In the processional were Philippine Consul Gary Auxilian and Lolita Gagaoin, president of the Pangasinan Ladies Club of Guam.

Everyone was moved. As Fr. Karl Vila said in his homily, “Our Lady of Manaoag is here to stay in St. Anthony de Padua &amp; St. Victor Church. This is her new home.”

Edna Ouano Toral of Mandaue, Cebu, has been donating the three-ft-tall image of Our Lady of the Rosary of Manaoag since 1996 to churches after she was healed of complicated ulcers in 1994, a miracle she attributed to the intercession of Our Lady.

She donated the first image to the Archdiocesan Shrine of St. Joseph in Mandaue City in 1996. Since then, she has donated 100 icons to churches in the Visayas and Mindanao.

In 1996, after I wrote about the Mandaue enthronement, Sen. Elizabeth Arriola of Guam wrote Toral and asked for the donation. But the request went unheeded for 16 years. Toral recently had a dream of the Virgin of Manaoag  telling her, “Bring me to Guam.”

So I wrote Consul General Bayani Mangibin of Guam if the Philippine community would accept the donation. “Please bring her,” he replied.

Powervoice Choir of Ilagan, Isabela, came to sing in the Guam celebration. This must have been the result of divine intervention.

Aurora Lazo of SM Lazo Medical Center, and president of the Stewards and Friends Foundation, had offered to bring the choir to Guam at her expense.

Another miracle was that Al Arriesgado, sculptor of the image, was given his first US visa. I, too, had a difficulty getting a visa, so I prayed to Mama Mary and the saints, so lo and behold, it came in the morning of Aug. 15, feast of the Assumption. Meanwhile, my friend Ali Rich Garcia had his flight confirmed on Aug. 15 by United Airlines.

For the first time, United Airlines had an image of the Virgin Mary as passenger because Toral paid for her seat. Bobby Hernandez, an airline officer, fixed her seat at the back of the plane carefully covering her with blankets to prevent damage. On the seats beside her were Marco Toral and Dr. Gardenia Larrazabal.

On a wheelchair, Al Arriesgado carried the image on his lap through immigration and out the airport. Consul Auxilian brought the image to the consulate for a one-day stay, so the staff could be blessed.

Auxilian was very happy because he said he could never visit her in Manaoag, but now as fate would have it, she was able to make it to Guam.

Also thanks to Tita Nelly Tinsay, a retired nurse; Sr. Lucia Arriola Pablo, a retired discalced Carmelite; Angie Roman and Magnosita Manjares for the despedida breakfast they hosted on the Sunday we left Guam.

Filipinos and Latinos will celebrate the feast of the Nativity of the Blessed Virgin Mary and 56th Canonical Coronation Anniversary of Virgen de los Remedios on Sept. 9 at the Cathedral of Our Lady of the Angels in Los Angeles, California.

Bishop Robert Mallari of San Jose, Nueva Ecija, will officiate in the concelebrated Mass at 3:30 p.m. This year’s hosts are the Apalit and Mexico, Pampanga, Associations of Southern California.

Lipa Archbishop Ramon Arguelles will lead the blessing of the altar, sacristy and Adoration Chapel of St. Padre Pio Shrine in Sto. Tomas, Batangas, Sept. 14, 3 p.m. Mass is at 4 p.m.

Fr. Jojo Gonda, parish priest, is inviting everyone, especially those who have been healed through the intercession of the saint, to go for thanksgiving and share their blessings. Contact him at 0917-5272004.

The Mary Queen of Peace Parish in Queen’s Row, Bacoor City in Cavite, will celebrate the Nativity of Mary with a Mass on Sept. 8, 8 a.m., with Fr. Tony Rojas and Fr. Manny Colmenar concelebrating.

The Diocese of Parañaque will mark the 12th anniversary of  the Canonical Coronation of Nuestra Señora del Buen Suceso on Sept. 8 with Masses at 6 a.m., 12 nn and 6 p.m. Bishop Jesse Mercado will officiate the 6 p.m. Mass.

The Women in Nation Building for the Catholic Church will hold a forum on  Sept. 9 at Cardinal Sin Hall in Ateneo, Loyola Heights.

Manila Archbishop Luis Antonio G. Tagle will speak on “The Role of Compassion on Nation Building.” Contact Mila David at 0919-9916029.