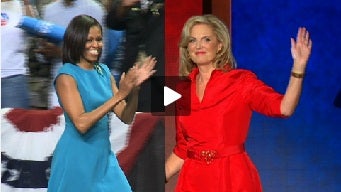 WASHINGTON—One is black, the other white. One was born into wealth, the other came from a working class family in Chicago.

As with the two presidential candidates, their wives – Ann Romney and First Lady Michelle Obama – provide a stark study in contrasts, in an election year in which a preference for one or the other presidential spouse could have more weight than usual with the November 6 election outcome expected to be close.

Both women are viewed as gracious, effective advocates for their husbands, Democratic US President Barack Obama and Republican presidential candidate Mitt Romney.

Political experts say that people vote for the president – not their partner on the home front.

But the first lady helps to fill in important blanks, and to complete public perceptions as voters try to make of their minds about whom to pick for the White House.

That, said Catherine Allgor, a professor at the University of California, Riverside, is why people listened with rapt attention to the speech delivered by Ann Romney last week at the Republican National Convention in Tampa.

“Americans believe that these women can testify to the true man, that the way he conducts himself in his private life – as a husband as a father as a manager of family affairs – testifies to his morality and true character,” Allgor told AFP.

They likely will be just as attentive when Michelle Obama delivers her testimonial speech praising the president at the Democrats’ convention in Charlotte, North Carolina, later this week.

The first lady has a role in American politics unlike the spouse married to the head of state in other countries. She can be a political force to be reckoned with in her own right.

Some believe it would be nearly impossible for a president to be accepted by the US public without a spouse and help-mate at his side. For all that, the position – one of the most influential in Washington – is largely ceremonial and is unpaid.

Allgor, whose specialty is the history of US first ladies, said such testimonials can have the power when they work to help the public revise its view of a candidate.

“It’s very powerful. That’s why these women get up there and talk about their marriages. It is a very powerful thing when someone gets it right,” she said.

New York Times reporter Jodi Kantor, author of the bestselling book “The Obamas,” told US public radio this week that first ladies get to be protected against incoming political fire – even if they lob a grenade or two of their own.

“In Ann Romney’s speech, she began by saying…’this is about love'” – even while uttering a highly political speech.

“The more they seem above the fray, above the politics, the more effective they are,” Kantor said.

The current US first lady is a Princeton and Harvard educated attorney, a career woman who at one point was the main breadwinner in the Obama family. She has embraced various initiatives in the president’s first term, including supporting military families and her “Let’s Move!” initiative to improve kids’ diets and combat childhood obesity.

Ann Romney, 63, has been a stay-at-home mother who never entered the workforce, instead choosing to stay active in parents’ and other civic groups. She has waged years-long struggles with multiple sclerosis – which she has said that her pursuits as an equestrian have helped to control – and breast cancer, which is in remission.

A convert to her husband’s Mormon faith, the businessman’s daughter received a bachelor’s degree in French from Brigham Young University.

Ann Romney is perhaps cut from more traditional, somewhat patrician cloth in terms of how people think of the first lady in years gone by, like the silver-haired pearl-wearing Barbara Bush or the poised, understated Laura Bush.

By contrast, Obama, 48, as the first African-American first lady, has tried to open up the White House to more diverse influences, installing art works there for instance by black artists, and hosting a concert series at the White House that celebrated diverse musical styles, from country to jazz to blues to rock. She is the mother of two daughters.

Obama and Romney have taken opposite views as to whether to watch the opposite party’s convention. Michelle Obama told the “Late Night with David Letterman Show” last week that she did not watch any of the Republican pageant.

“I, as the wife of the guy they are running against, I tend not to watch it,” Obama said on Wednesday night’s show.

Ann Romney, however, told Fox News last week that she would be tuning in to the Democrats’ convention with great interest.