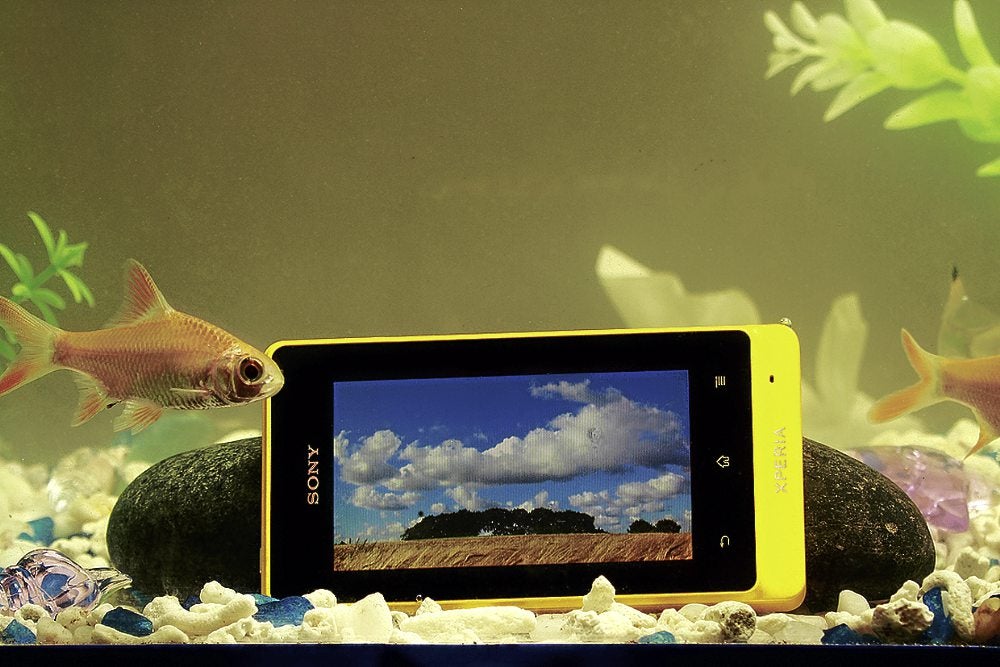 With his new smartphone on his DIY armband, entertainer/sportsman Gab Valenciano was rushing home on his bike when the rain started to pour heavily. Since he forgot to clamp it securely, the Sony Xperia Arc S fell on the muddy pavement.

“For a moment, my heart skipped a beat. Then I thought, it’s going to be okay,” he recalled. A few weeks later, he tossed the same phone into the aquarium at the press launch at The Society Lounge. “Even if it gets wet, it still works  properly.”

The young Valenciano is a brand ambassador of Sony’s new line of  scratch-resistant, water-resistant and dust-resistant Android phones—the Xperia Arc S and the Xperia Go. They are the first in the market to produce these phones, that can function in challenging conditions such as sudden rain and flash floods or sudden drops in the toilet bowl or on a mound of flour.

“If you’re in a social event and wine gets spilled on the phone, you can douse it off with water,” said Patrick Larraga, head of Sony mobile business for Sony Philippines. Not only can the user talk and text afterward, but even the video images remain sharp, operated by the Mobile Bravia Engine.

“This allows you to see images very vividly even underwater,” he said.

Larraga added that Sony’s new touchscreen phones are not as fragile as they look. For P26,000, the Xperia Arc S has a faster processor and an extra wide screen of 4.2 inches. But to the picture-happy Pinoy, the main attraction is the 12-megapixel camera with its wide lens and screen and an intuitive interface.

Passionate about traveling, Larraga found the Arc S handy during his trip to Nepal. The fast capture of the camera quickly records moving images and the videos record in high-definition.

When Valenciano was approached to endorse the brand, he did his research before he agreed. After reading the reviews, he was impressed with the wide screen built on the very streamlined but sturdy chassis, unlike the previous smartphones that he had used.

He also liked its various functions that saved him from using too many gadgets at one time and keeping them waterproof.

He added that the model worked well with his lifestyle, since he liked to surround himself with waterproof objects.

“I’ve been using it when I run and bike. I have a Nike App that tracks my run. I use it when I dance and swim. It’s connected to waterproof speakers,” he said.

These new Android phones can be partnered with Sony’s smartwatch. “Even if your phone is in the back or in your pocket, you can see who is texting or check on Twitter from the watch. I can see myself biking with it, aside from checking the time and distance,” he said.

Valenciano’s previous smartphone had keypads before he switched to the Xperia Arc S with its touchscreen. He found it easy to adapt because the touchscreen has got the fastest interface in the market.

“I have a widget that shows my battery life. If I want to add another widget, I go to Plus. If I want to look for a word, I go to Dictionary Dotcom. That’s what’s helped me. Instead of  typing, I open a widget of my fave people or top contacts—my girlfriend, best friend, mom, dad, cousin, brother. When you call them, click on their picture and call.”