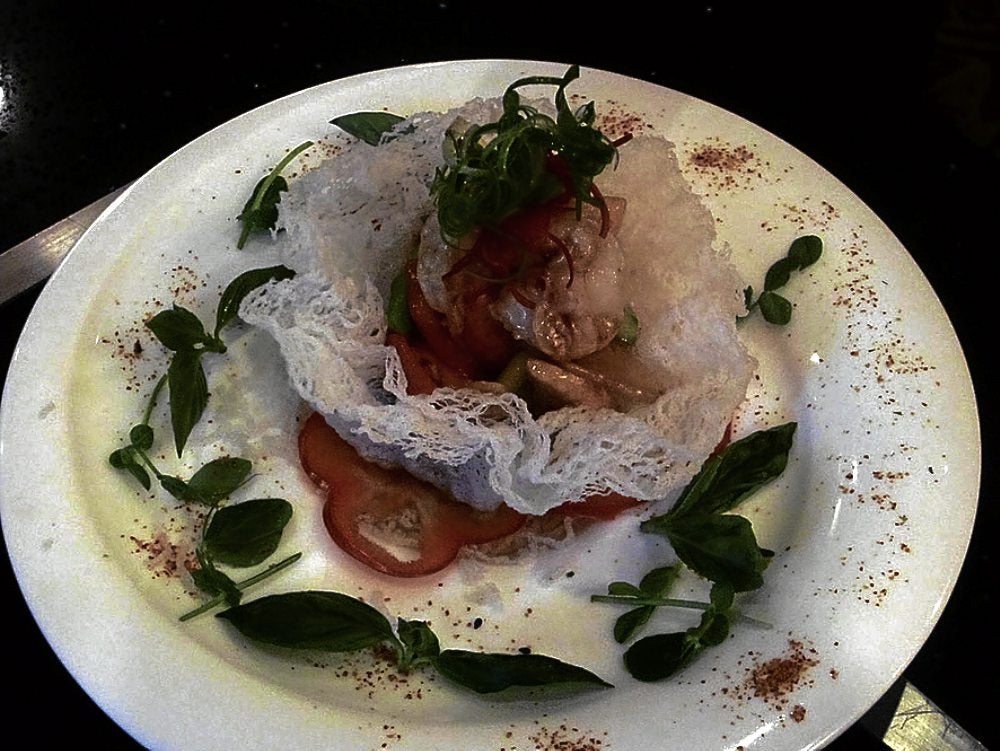 With chef Martin Yan, what you see on television is what you get in person. The same self-deprecating humor. The same passion for cooking. The same overflowing energy.

“I haven’t gained a pound in 26 years,” he announced during a press luncheon at Edsa Shangri-La Hotel’s Summer Palace restaurant. Asked how he manages to stay trim, he joked: “I run. I chase women but I haven’t been successful. I also don’t eat what I cook.”

Not that his weight really matters to his legions of fans. Over the years, Yan has hosted over 3,000 cooking shows aired worldwide, written 30 best-selling cookbooks, and has won numerous awards and distinctions. His restaurants include Yan Can and SensAsian in California, which offer Pan-Asian cuisine.

The revered Julia Child was his friend, with whom he sometimes explored the little corners of Chinatown in Boston (and who wrote the introduction to his book “Chinatown Cooking”).

He’s also friends with other acclaimed chefs like Jamie Oliver, Anthony Bourdain and Bruce Lim. He travels over 200 days a year, teaching in top culinary institutions, promoting his shows, doing consultancies and participating in fund-raising events for charity.

Unlike other celebrities, however, he often travels alone, carrying his four suitcases himself. These contain his kitchen tools and a few books and DVDs to give as presents.

His humor and knife skills aside, Yan has more than enough credentials to back up his cooking shows.

Born in Guangzhou, China, to a restaurateur father and a mother who ran a grocery store, Yan was working as an apprentice in a Hong Kong restaurant by the time he was 13. Studies at the Overseas Institute of Cookery in Hong Kong further sharpened his skills. Moreover (perhaps not as well-known about him), this certified master chef has an MS in Food Science from the University of California/Davis in the US.

Aside from the now classic show “Yan Can Cook,” which started airing in 1978, Yan also recently hosted “Martin Yan’s China,” a 26-part TV series on his travels through the length and breadth of his native country. His latest cooking show is “True Passion-Martin Yan,” aired on the Asian Food Channel.

While in Manila for AFC, Yan worked with Edsa Shangri-La’s culinary team to present his signature dishes at the hotel’s Summer Palace. The menu included crispy bean curd skin rolls, dragon and phoenix in a basket (a stir-fried mixture of chicken, shrimps and vegetables presented in a crisp noodle basket), beef stew with bean curd stick and Chinese chestnuts and wine-poached pears.

He also did cooking demos at the Center for Culinary Arts, at Lucky Chinatown and in Eastwood Mall, where he regaled the audience with his wit and cooking prowess while showing them how to prepare chicken satay with spicy peanut sauce, seared fish fillet in egg white sauce and tropical fruit rolls.

Here are some of Yan’s choice words, tips and bits of advice:

On his favorite kitchen tools:  “A cleaver (which he designed himself). You can’t do much without a good knife.”

On his favorite ingredient:  “Ginger. It’s the single most important seasoning in Chinese, Japanese and Korean cuisine. You can also use it in many different ways, such as to make candy, tea for stomach ailments, and even for insect bites. It’s multifunctional.”

On fusion cooking: “Food is like fashion, it evolves. Filipino food, for example, has Asian and European influences. Indonesian cuisine has Dutch. So, in a way, these are fusion cuisines. The techniques and essence of food, however, don’t change. You have to understand the food, to maintain its essence. If you don’t do fusion properly, then it can be confusion.”

On Asian cuisine: “Asian food is good for you. It’s healthy and not expensive to prepare.”

On his favorite food memory: “Every time I cook chicken in a clay pot, I remember when I was young and my mother used to cook this for me. Food is about memories and bringing back great memories. I call the dish Rainbow Chicken Casserole because it’s very colorful. I put in red chili, jicama and vegetables. It also keeps well and tastes even better the next day. I cooked this once for an event of the James Beard Foundation.”

On cooking at home: “I always cook at home, even when traveling. On a recent vacation in Hawaii, as soon as we arrived, we got a rental car and loaded it up with $450 worth of groceries. Every day we would cook, so it also brought the family together. Eating out in Hawaii can be very expensive.”

On his charity work: “I help raise money for the School of Hope in China. (In one event) we made almost one million yen. I also sometimes auction off the knives I use for charity.  Once, someone paid $6,000 for the knife.”

On his favorite Filipino food:  “Adobo. It keeps well and reheats well. I even make seafood adobo. Just cook the pork as you would adobo and, at the last minute of cooking time, add the seafood.”

What he always has in his kitchen: “Chinese/Asian sausage, tofu, several kinds of vegetables like carrots (it’s healthy because it has beta carotene), fruits, XO sauce (which I make myself), salted eggs and soup stock. Once I have the basics, I can do anything I want.”

Cooking oil he uses at home:  “Canola oil with a bit of olive oil.”

On recipes: “Recipes are just reference. Use it as a guide, but use also your imagination.”

On cooking: “Cooking is common sense and imagination. It’s also instinct. And it’s not how expensive the ingredients are, it’s how you put things together.”

On sharing food: “There’s a Chinese saying: ‘We all eat.’ When we eat, we share with friends, and that’s why food and cooking bring friends together. Food brings even enemies together. In front of the table, we are all equal.”

On what he learned from his mother: “[When I was a kid], I would hang out in the grocery store a lot, so I learned about ingredients early on. Even then, I already knew what salted black beans are, what shrimp paste is. I also learned that just by using simple ingredients, you can prepare a lot of things.”

On how he stays slim: “I run half an hour to 45 minutes every day. I also swim. When traveling, I use the gym. I eat only half a bowl to one bowl of rice at the most.”

On cooking Chinese food: “Always heat up the frying pan to allow the meat to sear. Do not put the oil too early. And never overcook, especially the vegetables.”

Advice to chefs: “Follow your instincts, your nose and your heart. Don’t try to be a celebrity. Just do it because you love it. You have to pay your dues before you can become proficient. Skill is acquired. You have to do it enough before you can be proficient and it becomes second instinct. Cooking is instinct as well as imagination. Don’t give up. You become a chef because you have a mission. Without a dream, there’s no hope, no direction.”

On life: “The simpler life is, the happier you are. If you make life complicated, you just worry more. My own life is very simple.”