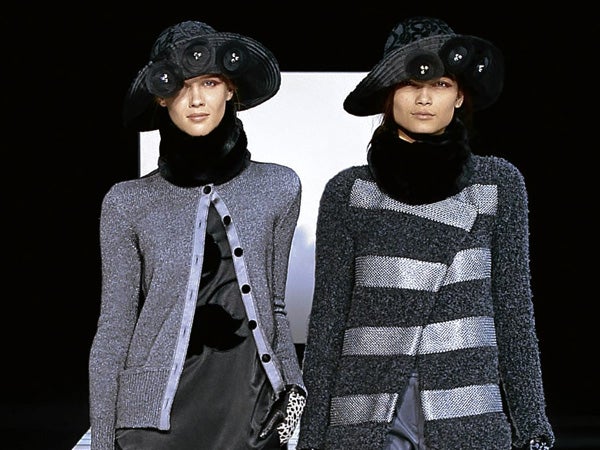 Contrasting textures and materials, colors in gradation and play on volume—these characterized the Fall/Winter collections of Giorgio Armani for men and women.

The Italian fashion house presented its men’s and women’s lines for Giorgio Armani and Emporio Armani to regional journalists in Hong Kong recently.

The collections, which included accessories, were the same pieces Armani showed  in Milan.

The designer’s trademark expertise in tailoring was fully evident. This time, however, he opted for more relaxed silhouette, especially in the men’s line.

There were strong, if unlikely, color combinations such as orange and shocking pink for cocktail dresses and separates.

The simple black dress was tastefully embellished with hand-sewn beads in various sizes and in gradating shades, from white to orange.

The couture-level quality of his beaded ready-to-wear dresses was hard to miss.

There was ample layering with flared dresses worn over shorts; hemlines for both Giorgio Armani and Emporio Armani were cut slightly above the knee to show off what was underneath.

In lieu of leggings and leotards, Armani opted for sheer black stockings.

His prints were  streamlined, combining lines and stripes in various sizes and in alternating shades of gray and orange.

Corporate women will  have enough stylish suits to choose from. So notable was a gray ensemble using snaps instead of buttons. The snaps were imbedded on double-breast suits, on round markings on the fabric so that they came out like buttons.

The look went well with mannish shoes—moccasins or lace-ups, with thick soles, semipointed toes and low heels. They came in color combinations (black and bone, for instance) and materials (leather, pony skin and faux animal prints).

Most of Armani’s bags and clutches for Giorgio Armani and Emporio Armani were structured. There were matching bags in orange and tiger print made of leather and even stingray.

Since Emporio caters to a younger market, it has accessories in more whimsical shapes and prints.

Corded tiers and layers were used in skirts, dresses and tops. The designer also resorted to layering for Emporio. Among his key pieces were cuffed, double-stitched shorts worn with dresses, long jackets and vests.

Color was again somber, except for Emporio’s Mongolian fur suit consisting of furry black jackets with streaks of green and pink. For a more polished look, women could opt for black jacket with sequins in green, turquoise, fuchsia and gold.

For his men’s collection for Giorgio Armani, the designer  combined winter materials—velvet, corduroy, leather, knitted wool and cashmere. He opted for less-structured silhouette by doing away with shoulder pads in favor of a snug, easy and “deconstructed” look. His pleated pants came in semi-baggy silhouettes.

For instance, he combined a velvet dark jacket with lighter shade of corduroy trousers. The corduroy was wide-ribbed, instead of the high-street varieties with smaller, less-pronounced ribbing.

Apart from providing his vests with interesting details such as flaps to partly hide the zippers, he opted for less formal material—wool combined with cotton in classic heather gray. The overall look was young and a bit casual from afar, but up close, you’d see the finely crafted details in the buttons, buttonholes, lining and zippers.

And because of advances in technology, the designer was able to produce pieces that looked fairly light and thin for winter, yet good enough to keep you warm in the cold months.

Armani used details in his men’s line inspired by both the future and the past, particularly the ’80s—such as diagonal openings using either zippers or buttons on a number of jackets and sweaters.

There were also innovations such as velvet jackets with leather collars and tuxedo jackets with wider, more rounded lapels. In one jacket, instead of angular and pointed, he used round collars.

In various materials, textures, he mixed colors and had gradations of neutral shades. He used the Armani favorite color, blue, in sweaters—cerulean, electric blue, ice blue—and combined with red.

Despite its simple lines, the collection bore details that spoke volumes of its creator’s imagination. Buttonholes of coats and jackets were made of leather.

He also juxtaposed various materials to create one look, and chose the thinnest yet warmest materials available to reconcile style with comfort.

Emporio Armani may be aimed at a younger market, but some fashion-forward men in their 50s, who have managed to maintain their youthful looks and build, are still able to get away wearing the label.

Emporio Armani is exclusively represented and distributed in the Philippines by Stores Specialists Inc. Visit SSI’s Emporio Armani store at Greenbelt 4 in Makati.