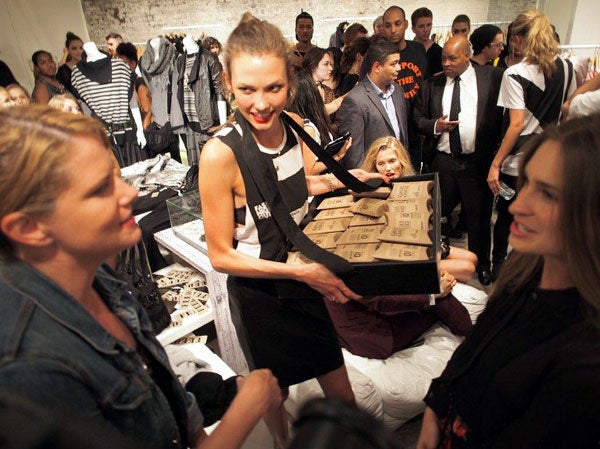 Top model Karlie Kloss (C) hawks her own Karlie's Kookies outside the DKNY boutique in the Soho district of New York City on September 6, 2012 during Fashion's Night Out, a retail promotion event coinciding with the outset of New York fashion week. Sold for USD 5 apiece, each oatmeal cookie is intended to provide 10 school meals via the anti-hunger charity FEED. AFP Robert MacPherson

NEW YORK — Fashion’s Night Out is a sartorial pub crawl through Manhattan at the outset of New York fashion week, a chance to scope out the trendiest boutiques with a champagne flute in hand and no pressure to buy.

On Thursday, it was also a chance to sample top model Karlie Kloss’s gluten-free oatmeal chocolate chip cookies at $5 a pop, with proceeds going to a foundation to combat hunger launched by a young member of the Bush political dynasty.

“I wanted to create a cookie that I could enjoy and that I could share with all my friends without, I don’t know, worrying about the guilt of a cookie,” Kloss, 20, best known as the face of Christian Dior, told reporters at the DKNY Soho boutique.

Proceeds from the pricey but “fashionably wholesome” Karlie’s Kookies went to FEED, co-founded by designer and model Lauren Bush Lauren, 28, who is the granddaughter and niece of former presidents George Bush and George W. Bush, respectively, and whose father-in-law is designer Ralph Lauren.

“We’re very much about getting consumers engaged and active and essentially becoming donors in the fight to end world hunger,” Lauren told AFP, adding that FEED also partners with Donna Karan’s diffusion line on fund-raising bags and boots.

“I really find, honestly, that so many people are so generous, but I do think younger people are quicker to embrace and understand what we are doing” as a social business, she added.

Kloss, a midwestern American who regards her passion for baking as “therapeutic,” has had a particularly busy week, switching modeling agencies and signing on to MTV’s “House of Style” as co-host with fellow catwalker Joan Smalls.

She turned up at DKNY – fresh from a showing of her Instagrams at Juicy Couture – in a leather pencil skirt and official Fashion’s Night Out T-shirt, cheerfully posing for fan photos and, occasionally, inspecting her look in the mirror.

Spearheaded by Vogue magazine in 2009 to promote high fashion in the midst of economic hard times, Fashion’s Night Out has expanded to major cities across the United States and 18 other countries, although New York remains its focal point.

Celebrity sightings included Sarah Jessica Parker, rather appropriate given how many of the events felt like party scenes from “Sex and the City.”