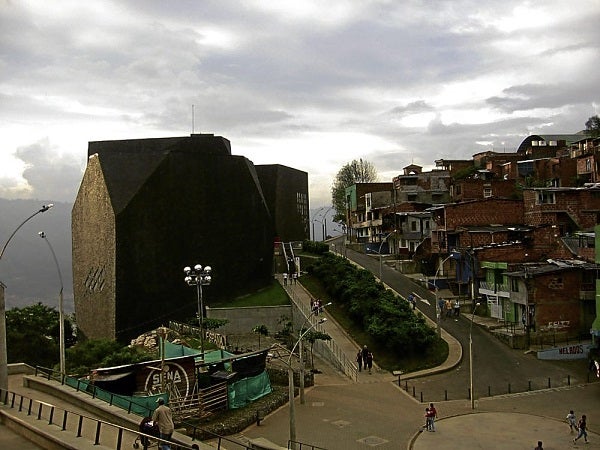 Maybe the last place you’d expect to find a Filipino would be in Medellín,” said American TV anchor Brian Andrews. He interviewed Cebuano furniture designer Kenneth Cobonpue (accent on the second syllable) at the recent Colombia Moda, the most important fashion event in Latin America.

In a bid to level up from a fashion week to a lifestyle fair, Colombia Moda featured Matisses furniture store, which showcased Cobonpue’s works.  During his week-long stay, the designer observed that he was the only Asian in Colombia’s second largest city—and his works seemed fresh and innovative in the eyes of the South Americans.

Aside from opening new markets and being introduced to the Colombian press, Cobonpue discovered Medellín’s metamorphosis from the world’s cocaine capital to city of cool.  More significant from a designer’s viewpoint is that the city utilized architecture to democratize its society.

On the first day, Cobonpue, with two bodyguards in tow, toured the city with Medellín’s Mayor Aníbal Gaviria.   In the ’70s and ’80s, the late drug lord Pedro Escobar and his cartel terrorized the streets, making Medellín the most dangerous city in the world.  Escobar’s death and government efforts to break up the drug cartels have changed the atmosphere.

Musicians replaced gangsters and assassins on motorbikes, and a crime-ridden city park now has an orchidarium. The urban decay has been regenerated with museums, parks, shopping centers, high-rise condominiums and five-star hotels, while the colonial architecture is preserved.  Neighborhoods once ruled by thugs have become nightclub strips pulsating with cumbia music.

Medellín’s dramatic progress is attributed to the former Mayor Sergio Fajardo, son of a prominent architect, whose vision was to beautify the slums.   He commissioned top architects to design libraries and public buildings, some of them looking very edgy, amid the slums.  The progressive mayor invested his budget on education, new public spaces, livelihood programs and improved transportation.

The New York Times quoted Fajardo as saying, “Our most beautiful buildings must be in our poorest areas.” He maintained that indigents would acquire skills in an improved environment, and architecture is part of that greater social network.  Educated as a mathematician, Fajardo told NYT he was partial to geometric forms, hence, the unusual shapes of the new public building projects.

The public utilities department, Empresas Públicas de Medellín, also played a vital role in the city’s architectural resurgence. It is mandated to supply potable water and electricity to the slums. Its profits fund the new public centers and the parks.

Cobonpue was impressed that slums, such as the Santo Domingo Savio, were located on the hillsides. Unlike the squalor of Manila, he said Medellín’s slum district was comparative to lower-middle class housing project in the Philippines.  Manila’s shanties are made from tarpaulin, wood and galvanized iron sheets, while Medellín’s slum dwellings were covered with brick.

The designer also noted how the public transport system links the rich to the poor areas.   The cable car system transports the poor to their hillside community, free of charge. Likewise, instead of taking a dilapidated bus, they can take an escalator that rises 1,300 feet to the hilltop.

From downtown, Cobonpue took a scenic ride on the cable car with Mayor Gaviria, whose vision is to build more people mover systems that will connect the expanse of slums and add landscaping with the new public buildings and more progressive improvements.

“The slums have the best views,” said Cobonpue. The hilltop opens to a panaroma of green meadows, high-rises and renovated historical buildings.  “The most advanced architecture was built in the depressed areas. They give people dignity and are a source of civic pride.”

Cobonpue was amazed that the Parque Biblioteca España, designed by Bogotán architect Giancarlo Mazzanti, donated by King Juan Carlos and Queen Sofia of Spain, was located in that district.  Resembling three connected boulders, it houses Internet rooms, a day care center, an art gallery, a library and an auditorium.

Cobonpue also visited a public school where classrooms are very contemporary in design and the teacher taught with the laptop. “It was an eye opener.  Colombia is a developing country. Like the Philippines, the average income is $300 a month for office employees.”

Art has prospered in the city, with Fernando Botero as the most famous name. A plaza named in his honor is dotted with his sensual sculptures.

After the enlightening tour, Cobonpue spent most of his time at Colombia Moda,  watching the shows, visiting the exhibitions and attending the parties. He spoke about design in several venues and was well received by the media and industry leaders.

He observed that Colombian women are chic, although they don’t patronize well-known luxury brands. “I hardly saw a Louis Vuitton or a Chanel bag, yet the women were elegant. They favored the local brands.”

In every media interview, the press would ask his impression of Colombian women. “They are very voluptuous and are proud of it,” he said. They pride themselves in being arguably the most beautiful women in Latin America for their natural and cosmetically enhanced looks.  (After all, Colombia is known for having the best board-certified plastic surgeons who charge affordable prices.)

“I even had a photograph with a pretty police officer, just to show how attractive they are,” said Cobonpue.

But it’s not just the Latina pulchritude that the designer will remember. To him, Medellín is a testimony to the strength of architecture  and public spaces in recreating a city’s destiny.